Filibuster. The term in its legislative sense was first used by Rep. 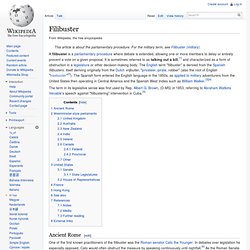 Albert G. Brown, (D-MS) in 1853, referring to Abraham Watkins Venable's speech against "filibustering" intervention in Cuba.[5] Ancient Rome[edit] One of the first known practitioners of the filibuster was the Roman senator Cato the Younger. In debates over legislation he especially opposed, Cato would often obstruct the measure by speaking continuously until nightfall.[6] As the Roman Senate had a rule requiring all business to conclude by dusk, Cato's purposefully long-winded speeches were an effective device to forestall a vote.

Cato attempted to use the filibuster at least twice to frustrate the political objectives of Julius Caesar.[6] The first incident occurred during the summer of 60 BC, when Caesar was returning home from his propraetorship in Hispania Ulterior. Westminster-style parliaments[edit] United Kingdom[edit] In local unitary authorities of England a motion may be carried into closure by filibustering. Deception. Deception, beguilement, deceit, bluff, mystification and subterfuge are acts to propagate beliefs that are not true, or not the whole truth (as in half-truths or omission). 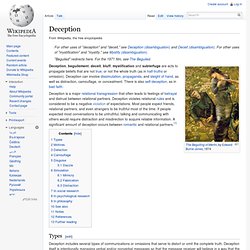 Deception can involve dissimulation, propaganda, and sleight of hand, as well as distraction, camouflage, or concealment. There is also self-deception, as in bad faith. Types[edit] Deception includes several types of communications or omissions that serve to distort or omit the complete truth. Deception itself is intentionally managing verbal and/or nonverbal messages so that the message receiver will believe in a way that the message sender knows is false. Alcatraz coup. Example[edit] Consider this layout of the club suit: South wants three tricks from clubs but the opponents have been successful in concealing the location of the ♣Q. 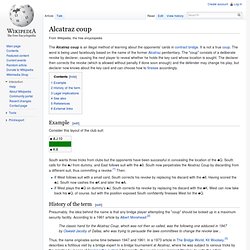 South calls for the ♣J from dummy, and East follows suit with the ♣3. South now perpetrates the Alcatraz Coup by discarding from a different suit, thus committing a revoke.[1] Then: If West follows suit with a small card, South corrects his revoke by replacing his discard with the ♣8. Creative accounting. Creative accounting is a euphemism referring to accounting practices that may follow the letter of the rules of standard accounting practices, but certainly deviate from the spirit of those rules. 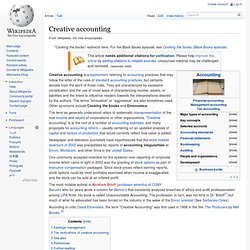 They are characterized by excessive complication and the use of novel ways of characterizing income, assets, or liabilities and the intent to influence readers towards the interpretations desired by the authors. The terms "innovative" or "aggressive" are also sometimes used. Other synonyms include Cooking the books and Enronomics. Newspaper and television journalists have hypothesized that the stock market downturn of 2002 was precipitated by reports of accounting irregularities at Enron, Worldcom, and other firms in the United States.

One commonly accepted incentive for the systemic over-reporting of corporate income which came to light in 2002 was the granting of stock options as part of executive compensation packages. Abuse of process. Abuse of process is a cause of action in tort arising from one party making a malicious and deliberate misuse or perversion of regularly issued court process (civil or criminal) not justified by the underlying legal action. 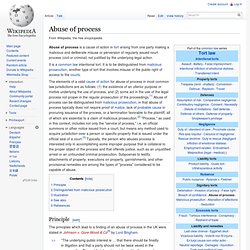 Illustration[edit] A cause of action for abuse of process may lie in situations where a criminal proceeding is brought against a defendant for improper motives. See also[edit] References[edit] Jump up ^ Cartwright v. Letter and spirit of the law. Cheating. Academic[edit] A small cheat sheet can be used to cheat during an academic examination. 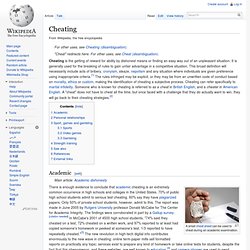 There is enough evidence to conclude that academic cheating is an extremely common occurrence in high schools and colleges in the United States. 70% of public high school students admit to serious test cheating. 60% say they have plagiarized papers. Only 50% of private school students, however, admit to this. The report was made in June 2005 by Rutgers University professor Donald McCabe for The Center for Academic Integrity. The findings were corroborated in part by a Gallup survey. Personal relationships[edit] Cheating can occur in various forms: physical, emotional, or online. Sport, games and gambling[edit] Gaming the system. Gaming the system (also referred to as gaming the rules, bending the rules, abusing the system, cheating the system, milking the system, playing the system, or working the system) can be defined as using the rules and procedures meant to protect a system in order, instead, to manipulate the system for a desired outcome.[1] According to James Rieley, the American banker, structures in companies and organizations (both explicit and implicit policies and procedures, stated goals, and mental models) drive behaviors that are detrimental to long-term organizational success and stifle competition.[2] For some,[who?] 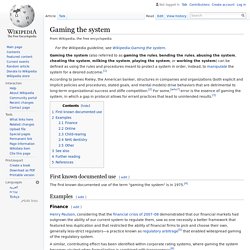 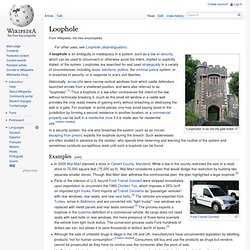