Advocacy to Protect Ifugao Culture and Heritage. Ifugao, with its hand-carved pride of Banaue Rice Terraces, remains to be the home of Philippines Indigenous tribes. 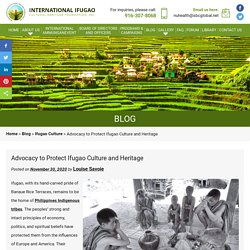 The peoples’ strong and intact principles of economy, politics, and spiritual beliefs have protected them from the influences of Europe and America. Their persistence in battling colonizers’ advances, not only their geographic location, contributed greatly toward preserving their heritage for hundreds of years. While the rest of the archipelago has succumbed to changes brought by one colony to another, Ifugao cultural heritage remains untainted by the influences of colonialism. Their uniqueness shines in every way. Their clothing—bahag and tapis—continues to fascinate visitors.

Ifugao hudhud has to be mentioned, too, as it was their early form of literature in an oral manner. Learn the History and Meaning Behind Ifugao Fashion. Ifugao fashion is woven in textiles of organic beauty, bright colors, and unique patterns, but there’s so much more than what meets the eye. 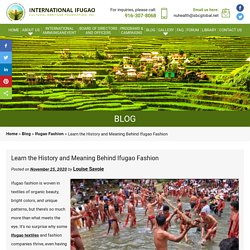 It’s no surprise why some Ifugao textiles and fashion companies thrive, even having products in high demand. Once you have been to this landlocked province of the Philippines in the Cordilleras region, you can’t help but carry such an emotional impact when encountering all things Ifugao the next time around. Bahag—a major part of Ifugao traditions, stories, and a source of pride—are the Ifugaos’ main form of clothing. With the hands of an artisan, bahag were created via an intricate and lengthy process over tree bark or dried banana leaves. Preserving the Ifugao Culture and Tradition. In today’s interconnected world, culture has the power to transform and influence societies. 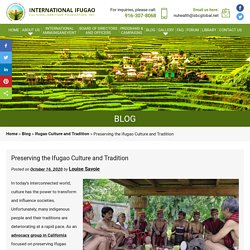 Unfortunately, many indigenous people and their traditions are deteriorating at a rapid pace. As an advocacy group in California focused on preserving Ifugao culture, we aim to protect their heritage through the following efforts: Advocacy As an advocacy group, we acknowledge that there is more to cultural heritage than simply considering it as a legacy in our past.

Foundations: What Are They and What Do They Contribute? Generally speaking, a foundation is a type of non-profit organization that focuses on making grants for charitable purposes to support a cause. 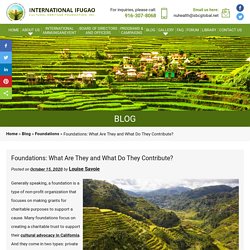 Many foundations focus on creating a charitable trust to support their cultural advocacy in California. And they come in two types: private and public. is an established advocacy group in California focused on preserving the indigenous people and culture of the Philippines. By using our foundation as a tool for preservation, we can achieve the following: Effective and consistent philanthropic efforts One of the advantages of establishing a foundation is creating a vehicle to facilitate organized and systematic philanthropic efforts. Do you share our cause, as well?

The Importance of Preserving and Revitalizing Ifugao Culture. With more than 7,000 islands, the Philippines is rich in natural resources. 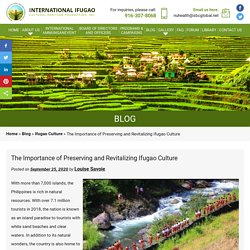 With over 7.1 million tourists in 2018, the nation is known as an island paradise to tourists with white sand beaches and clear waters. Using Sustainable Tourism to Preserve Ifugao Culture and Tradition. Sustainable tourism is more than a buzz word, it is the single, most effective way to help preserve our cultural legacies from being abused and forgotten. 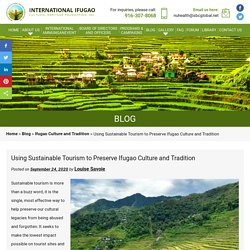 It seeks to make the lowest impact possible on tourist sites and the environment and community around it while helping generate income, employment, and enhancing opportunities for the future. As an advocacy group in California working to preserve and elevate Ifugao traditions and culture, we at believe that this is the most critical measure we can take today if we are serious about our efforts. Through sustainable tourism, we can preserve and protect Ifugao’s cultural heritage without forcing local communities to compromise on their home environment. In our years of cultural advocacy in California, promoting Ifugao culture, however, we have seen that being sustainable is usually associated with environmentally friendliness and green efforts.

So, how do we practice sustainable tourism? Responsible Appreciation of the Native Culture. Appreciating the culture, arts, and way of life of other individuals is embedded in modern-day tourism. 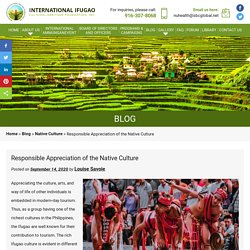 Thus, as a group having one of the richest cultures in the Philippines, the Ifugao are well known for their contribution to tourism. The rich Ifugao culture is evident in different kinds of native crafts, such as handcrafted wood and hand-woven textiles. In fact, a lot of people travel as far as Banaue just to obtain these prized handmade crafts. Despite how popular this Philippine Indigenous Tribe may be to tourists, not many are carrying on Ifugao traditions. A Glimpse of Ifugao Native Arts and Crafts. Far from being engulfed by the changes brought about by the country’s development, Ifugao has maintained its identity, particularly its native arts and crafts. 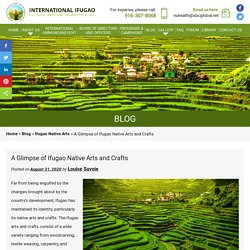 Experience True Beauty with the Ifugao People of Banaue. Undoubtedly, the Cordillera Administrative Region (CAR) is home to one of the testaments of the beauty, richness, and diversity of Filipino culture. 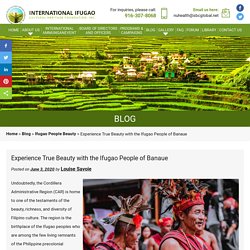 A Rich Culture Threatened By COVID-19. The Philippines is known to be one of the most culturally diverse countries in the world. 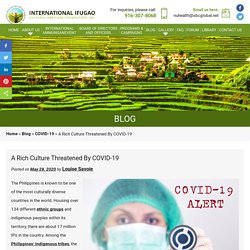 Housing over 134 different ethnic groups and indigenous peoples within its territory, there are about 17 million IPs in the country. Among the Philippines’ indigenous tribes, the Ifugao people in the Cordillera Administrative Region (CAR) are among the most celebrated.