50 Fermented Salsas, Dips, and Spreads. Rancho gordo rice beans. Brazilian Carrot Cake Chocolate Cupcakes Recipe. In.pinterest. Chicken or steak with balsamic BBQ sauce. 1) Combine all the sauce ingredients in a small saucepan and stir until all the ingredients are incorporated and the mixture is smooth. 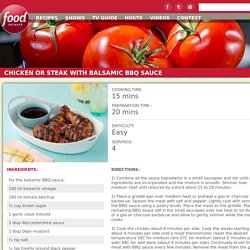 Simmer over medium heat until reduced by a third about 15 to 20 minutes. 2) Place a griddle pan over medium heat or preheat a gas or charcoal barbecue. Season the meat with salt and pepper. Lightly coat with some of the BBQ sauce using a pastry brush. Place the meat on the griddle. 3) Cook the chicken about 8 minutes per side. Serve the meat with the heated BBQ sauce alongside. Alternately the chicken can be baked in the oven. Cooking.nytimes. Biryani, Indian and Biryani Recipe. Kefir, Greek Yogurt Cheesecake and Water. 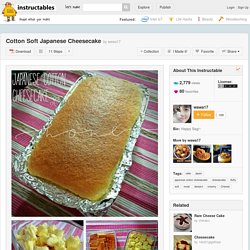 It is amazing. The velvety smooth, creamy, as well as the fluffy texture makes this kind of cheesecake stand out of crowd. The cheesecake is light, airy and fluffy because it has meringue in it. Once you scoop and put it in your mouth, it kind of melts! Therefore, the Japanese Cotton Cheesecake is very different from the rich “western-style” cheesecake. The ingredients are simple: flour (cake + corn), fresh milk, butter, cream cheese, eggs, sugar and cream of tartar. I will say that after you taste it, you might not want to go back to regular cheesecake again. lol. No Bake Microwave Cheesecake (Made in a Mug!) Aaah, cheesecake, my old friend. 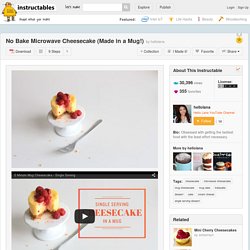 How much do I love thee? A lot. That's how much. But have you ever noticed how difficult it is to just stop at one piece when you have a cheesecake sitting in your refrigerator? The best taste comes from Mommy's hands! The World's Most Nutritious Green (Hint: It Ain't Kale) Related: The Only 4 Smoothie Recipes You'll Ever Need It’s extraordinarily nutritious: Ounce for ounce Moringa has twice the protein of yogurt, four times as much calcium as milk, and three times as much potassium as a banana. 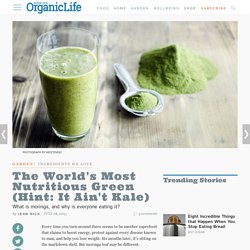 Related: The World's Healthiest Foods Not only is it healthy and tasty, but you don’t have to feel guilty about buying it. Unlike crops that can be harvested only once a year, moringa leaves grow and mature all year round. This means farmers can subsist on the plants while growing them, which hinders the kind of problems typically associated with foods such as quinoa, where the entire crop must be sold, leaving little for the farmers or their communities. So where can you score some? Frozen Coconut Yogurt with Cinnamon. But for anyone practicing a low-sugar diet, indulging in the dessert poses some problems, especially if the parlor doesn't have any sugar-free options. 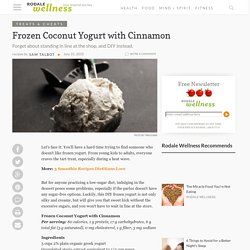 Luckily, this DIY frozen yogurt is not only silky and creamy, but will give you that sweet kick without the excessive sugars, and you won't have to wait in line at the store. Frozen Coconut Yogurt with CinnamonPer serving: 80 calories, 1 g protein, 17 g carbohydrates, 6 g total fat (5 g saturated), 0 mg cholesterol, 1 g fiber, 3 mg sodium Ingredients3 cups 2% plain organic greek yogurtGranulated stevia extract equivalent to 1/2 cup sugar2 tablespoons coconut milk1 teaspoon ground cinnamon1 teaspoon coconut extract1/2 cup unsweetened shredded coconut Directions1. In a large bowl, combine the yogurt, sweetener, coconut milk, cinnamon, and coconut extract. Adapted from The Sweet Life. 10 Recipes Every Ree Drummond Fan Should Master. If you’ve seen Ree Drummond on The Pioneer Woman, you know that she isn’t afraid to crack a joke or put a little extra TLC into every dish that she cooks. 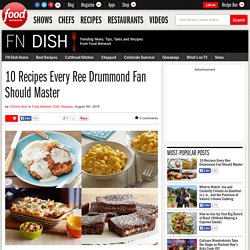 As a mother of four and the wife of a cowboy, Ree whips up hearty, comforting recipes — like decadent Chocolate Chip Caramel Sundaes and stick-to-your-ribs Chicken-Fried Steaks with Gravy — that both kids and adults will enjoy. Whether she’s making a grab-and-go breakfast or a three-tiered cake for a special birthday party, Ree’s recipes are a surefire way to impress your friends and family at any meal. Keep reading below for more of Ree’s comforting classics and check out her Oklahoma ranch for a behind-the-scenes look at where she makes all of these crowd-pleasing favorites. 1.

Chicken-Fried Steak with Gravy: If you’re wondering what a stick-to-your-ribs meal looks like, Ree’s fried steak illustrates just that. 2. 3. 4.