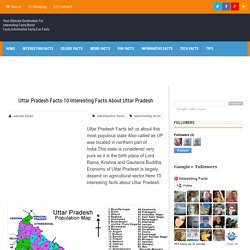 Economy of Uttar Pradesh is largely depend on agricultural sector.Here 10 interesting facts about Uttar Pradesh. ◾Uttar Pradesh facts tells us that UP is the most populous state in the Republic of India as well as the most populous country subdivision in the world. ◾It was created on 1 April 1937 as the United Provinces during British rule, and was renamed Uttar Pradesh in 1950. ◾Uttar Pradesh is the third largest Indian state by economy, with a GDP of ₹9,763 billion (US$150 billion). ◾Krishna, a divine king of Hindu legend, is revered as the eighth reincarnation (Avatar) of the Hindu god Vishnu, is said to have been born in the city of Mathura, in Uttar Pradesh. Solar Energy Facts – 10 Interesting Facts about Solar Energy - Interesting Facts. When people think of solar energy facts, they often think of solar panels that are used to convert solar energy into electricity. 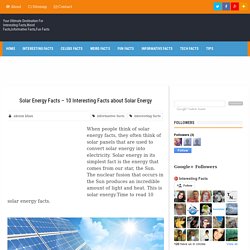 Solar energy in its simplest fact is the energy that comes from our star, the Sun. 10 Amazing Facts About Sholay Movie - Interesting Facts. Sholay was one amongst the most amazing movies of bollywood which transformed the nature of indian cinema.Since its release in 15 august 1975 it was the only movie which was still be in minds of indians.Sholay was so hit that it went on to earn a still-standing record of 60 golden jubilee across India.Here few more amazing facts about Sholay Movie ◾The film was shot in the rocky terrain of Ramanagara, in the southern state of Karnataka, over a span of two and a half years. 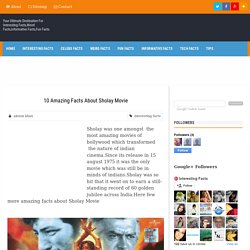 ◾Sholay was the first Indian film to have a stereophonic soundtrack and to use the 70 mm widescreen format. ◾The original idea of the film involved an army officer who decided to hire two ex-soldiers to avenge the murder of his family. ◾During romantic scenes with Hema, Dharmendra would often pay the light boys to spoil the shot, thereby ensuring many retakes and allowing him to spend more time with her. 10 Interesting Facts About United Nations - Interesting Facts. ◾The United Nations was formulated and negotiated among the delegations from the Soviet Union, the UK, the US and China at the Dumbarton Oaks Conference in 1944. 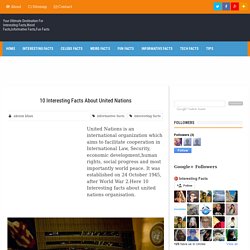 ◾Though the UN's primary mandate was peacekeeping, the division between the US and USSR often paralysed the organization, generally allowing it to intervene only in conflicts distant from the Cold War. ◾The UN has six principal organs: the General Assembly, the Security Council,the Economic and Social Council, the Secretariat ,the International Court of Justice and the United Nations Trusteeship Council. 10 Interesting Facts About Aligarh City - Interesting Facts.

Aligarh is a city in the Northern Indian state of Uttar Pradesh and the administrative headquarters of the Aligarh district.It lies 203 km northwest of Kanpur and is approximately 140 km southeast of the capital, New Delhi.Lets read 10 ineteresting Facts about aligarh below. 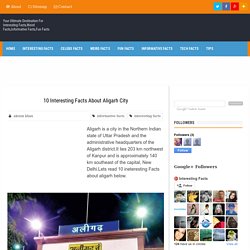 ◾Aligarh is one of the largest cities in Uttar Pradesh as well as the 55th largest city in India. ◾Before the 18th century, Aligarh was known as Kol. The history of the district up until the 12th century is obscure. ◾ In 1804, the Aligarh district was formed by the union of the second, third and fourth British divisions with the addition of Anupshahr from Muradabad and Sikandra Rao from Etawa. ◾Aligarh district is divided into five tehsils, namely Kol Tehsil, Khair Tehsil, Atrauli, Gabhana and Iglas.These tehsils are further divided into 12 blocks.

◾According to the 2011 census Aligarh district has a population of 36,73,849, roughly equal to the nation of Mauritania or the US state of Oklahoma. Some Amazing Facts About Cold War - Interesting Facts. Amazing Facts About Cold war is that although it is called as war, was not actually a war, but the name given to the conflict between the two powerful nations of the world, namely the United States of America (USA) and the Soviet Union (USSR). 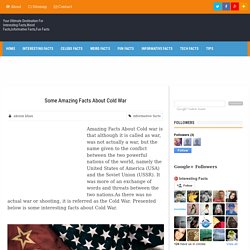 It was more of an exchange of words and threats between the two nations.As there was no actual war or shooting, it is referred as the Cold War. Presented below is some interesting facts about Cold War. ◾After the end of World War II, Communists seized power in Eastern Europe.and occupied certain parts of Germany and Austria.This region came to be known as the East Germany. ◾The Western region of Germany was ruled by the Allies (US, UK, and France), and came to be known as west germany. 10 Smart Card Technology Facts - Interesting Facts. Here 10 Smart Card Technology Facts.When you go to a shopping mall or restaurant, how do you pay the bill? 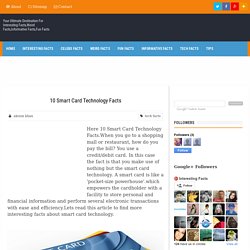 You use a credit/debit card. In this case the fact is that you make use of nothing but the smart card technology. A smart card is like a 'pocket-size powerhouse'.which empowers the cardholder with a facility to store personal and financial information and perform several electronic transactions with ease and efficiency.Lets read this article to find more interesting facts about smart card technology. ◾Michel Ugon from Honeywell Bull invented the first microprocessor smart card in 1977. ◾The first mass use of smart cards began in 1983 as a telephone card for payment in French payphones. 10 Interesting Facts About Nawazuddin Siddiqui - Interesting Facts. Here 10 Interesting Facts About Nawazuddin Siddiqui.If you are familiar with the hindi cinema movies kick and gangs of wasseypur than you will surely know this actor.Nawazuddin Siddiqui is an Indian film actor who works in Hindi cinema.After a period of unnoticed performances in his early career,he received the Filmfare Award for Best Supporting Actor in 2013.Here few more facts about Nawazuddin Siddiqui.Lets have a look ◾Siddiqui was born in Budhana, a small town and tehsil in Muzaffarnagar district, in the western part of Uttar Pradesh. 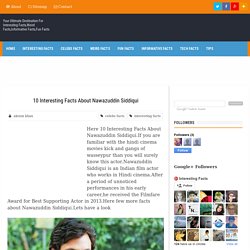 ◾He was graduate with a Bachelor of Science degree in Chemistry from Gurukul Kangri Vishwavidyalaya, Haridwar. ◾He was also graduated from National School of Drama. ◾Nawazuddin made his Bollywood debut in 1999, with a small role in Aamir Khan starrer, Sarfarosh. ◾Between 2002–05, he was largely out of work, and lived in a flat he shared with four other people, and survived by conducting occasional acting workshops. 10 Amazing Facts About Human Body - Interesting Facts. Here 10 amazing facts about human body.The world of medical science is limitless. 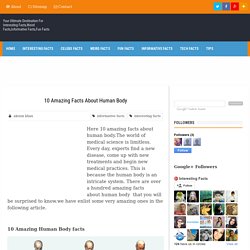 Every day, experts find a new disease, come up with new treatments and begin new medical practices. This is because the human body is an intricate system. There are over a hundred amazing facts about human body that you will be surprised to know.we have enlist some very amazing ones in the following article. ◾You will be surprised to know that more than half of the household dust consists of human skin; an individual sheds about 22 kilograms of skin throughout his/her lifetime. 5 Most Dangerous Airports In The World - Interesting Facts. Here 5 most dangerous airports in the world.Some airports,despite their incredible structures are considered dangerous, most likely due to their geological placements; when they are huddle in rocky mountains, uncertain climatic changes that surround them, or short runways,Pilots have to face heavy challenges for successful landings and takeoffs of the aircraft. 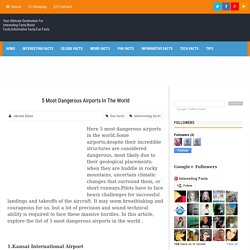 It may seem breathtaking and courageous for us, but a lot of precision and sound technical ability is required to face these massive hurdles. In this article, explore the list of 5 most dangerous airports in the world . 1.Kansai International Airport Location - Osaka,Japan. 10 Amazing Facts About Emperor Penguin - Interesting Facts. Here 10 Amazing Facts About Emperor Penguin.Emperor Penguin is one of amongst the 17 species of penguin found on earth.These penguins are the largest of the different kinds of species that are present in the cold waters of the Antarctic.Most of us knows about penguins is only that they lives in polar region.Time to know some more facts about this cute creature .Read below 10 amazing facts about emperor penguins. ◾ With an average height of 45 inches (or roughly 4 ft.)

10 Fun Facts About Dolphin-You Should Know - Interesting Facts. You are here 10 Fun Facts About Dolphin.When we hear the word 'dolphin', what comes to mind is the endearing and highly intelligent fish shown in movies and television shows.Dolphins are one of the most popular animals in the world, and are very popular as aquarium entertainers. Their high intelligence has also resulted in them being used by armed forces for marine threat identification.Here 10 Fun Facts About Dolphin-You should know ◾A group of dolphins is called a "school" or a "pod". Male dolphins are called "bulls", females "cows" and young dolphins are called "calves". ◾Dolphins have conical shape teeth.These conical teeth are used to catch swift prey such as fish, squid or large mammals, such as seal.

They live for 70 to 100 years, with some living for an even longer time. ✦ Whale sharks are very big in size. Their length is between 20 to 32 feet, and they weigh more than 20 tons on an average and Female whale sharks are larger in size than the males. ✦ Whale sharks have about 3,000 teeth set in 300 to 350 rows. Interesting Fun Facts About America - Interesting Facts. You are here 10 Interesting Fun Facts About America.The United States of America (USA), commonly referred to as the United States (U.S.) or America, is a federal republic composed of 50 states, the federal district of Washington, D.C., five major self-governing territories.It is the world's third or fourth largest nation by total area (land and water).Following are a few Interesting fun facts that make America(USA) stand apart from rest of the countries.So lets have a look The United States is the world's oldest surviving federation.

It is a constitutional republic and representative democracy, "in which majority rule is tempered by minority rights protected by law". The United States is home to 428 mammal species, 784 bird species, 311 reptile species, and 295 amphibian species. 5 Great Rail Journeys Of The World - Interesting Facts. You are here at 5 great rail journeys of the world.From high mountains to long tunnels train journey is greatest of all journeys.It is the only journey that makes a bunch of memories in our mind.So its time to know about 5 great rail journeys of the world.Lets have a look1.PIKES PEAK COLORADO, UNITED STATES The Pikes Peak Cog Railway takes you to the top of the mountain, and offers stellar views of the mountainous Colorado Springs.The just-over-three-hours trip takes you through a dense green cover of Englemann spruce, Colorado blue spruce, and Ponderosa pine trees, crossing the Minnehaha Falls along the way.In fact, some estimates tell us that some bristlecone pines in this region are more than 2000 years old.

You are here at 10 Interesting Fun Facts About Soccer. Soccer(footaball) is the most widely played and followed game on Earth.It is like a religion for many people from around the world.It is being said that socccer is originated from game 'harpastum' which was played by romans many years ago.Interesting facts is that It is also believed that in medieval times, kicking, punching, biting, and gouging was allowed during the game Nevertheless, there is a lot about soccer that even the most of us are unaware of.So time to know 10 interesting fun facts about soccer.Lets check out.

Dr Zakir Naik is currently in controversy with Indian government because a big part of society considered his statements as motivational facts for terrorism.Here we presents 5 interesting facts about Dr Zakir Naik .Lets have a look. 10 Interesting Facts About Yo Yo Honey Singh - Interesting Facts. Yo Yo honey singh a famous indian celebrity, rapper, music producer, singer and film actor is today's youth icon.He was first noticed after his debut song in a Bollywood film featuring Gagan Sidhu for the film Shakal Pe Mat Ja.He has also started to produce music for bollywood films.Here are 10 interesting facts about yo yo honey singh.Lets check out.