Bitmind.co. A Introduction to Basic P2P Ideas - Commons TransitionCommons Transition. Over the last ten years, the P2P Foundation has produced a sizeable body of material, both original and curated, but none of it is specifically designed as an introduction for people who are not so familiar with the P2P approach. 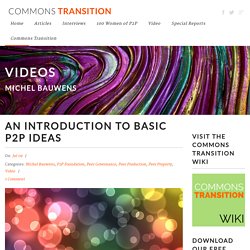 Irma Wilson, a member of the P2P Foundation and the founder of FutureSharp, decided to shoot a number of short videos featuring Michel Bauwens during his recent trip to South Africa. With Irma’s assistance and the help of filmmaker Michel Taljaard, we produced the four videos presented below. These videos showcase the P2P Foundation’s definition of peer-to-peer dynamics as well as P2P-oriented economic and political alternatives.

Appropedia.org sur Twitter : "Pro-bono, high-quality translations of world-changing ideas exist! @commonlibraries #P2P. Exporters of fine interlinguistic memes. The stateless economy, local economies, and the state. Technology - the dawning of digital power. How would it change the way we design our power grid, our telecommunications networks, or how we power cars and trains? 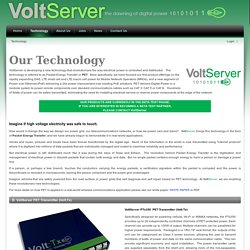 VoltServer brings this technology in the form of Packet Energy Transfer; and we have already begun to demonstrate it in real-world applications. Voices and music, pictures and books have been forever transformed by the digital age. Much of the information in the world is now transmitted using "internet protocol" where it is digitized into millions of data packets that are individually managed and routed to maximize reliability and performance. But electrical power is still distributed much like it was during the days of Tesla and Edison. The revolution behind Packet Energy Transfer is the digitization and management of electrical power in discrete packets that contain both energy and data. Imagine vehicles that are safely powered from the road surface or power grids that self diagnose and self repair based on PET technology.

Venture Capital - P2P Foundation. Aral Balkan: "Here’s how venture capital works: you go to an investor, before you’ve even built the thing you’re building and you tell them how you’re going to exit. 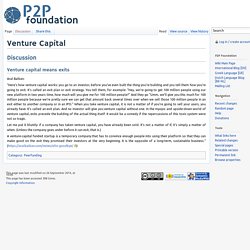 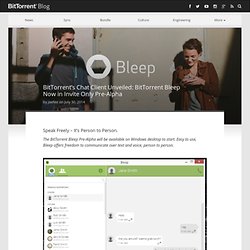 The BitTorrent Bleep Pre-Alpha will be available on Windows desktop to start. Easy to use, Bleep offers freedom to communicate over text and voice, person to person. Hoping for early access to BitTorrent’s first serverless chat client? Liquid Organisation - How we've invented LiquidO™ and why you should care. Capital, Growth and Molecular Socialism. The Future Now. In this interview, Shareable publisher Neal Gorenflo, John Robb of Global Guerrillas, and P2P foundation’s Michel Bauwens talk to David de Ugarte, one of the originators of the Spanish cyberpunk scene, about his more recent work developing a multinational worker cooperative, Las Indias, that is a culmination of his community’s thinking and work for the last decade. 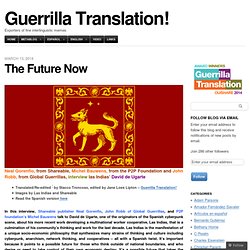 Las Indias is the manifestation of a unique socio-economic philosophy that synthesizes many strains of thinking and culture including cyberpunk, anarchism, network thinking, and cooperatives – all with a Spanish twist. It’s important because it points to a possible future for those who think outside of national boundaries, and who desire or need to take control of their own economic destiny. It’s a possible future that takes the centuries-old logic of cooperatives and remixes it for the urban-centered, global network society we live in today.

Cyberpunk was mainly a conversational / cyberactivist virtual community. John Robb. Tomorrow's Apps Will Come From Brilliant (And Risky) Bitcoin Code. For many, bitcoin — the distributed, worldwide, decentralized crypto-currency — is all about money … or, as recent events have shown, about who invented it. 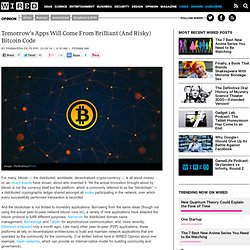 Yet the actual innovation brought about by bitcoin is not the currency itself but the platform, which is commonly referred to as the “blockchain” — a distributed cryptographic ledger shared amongst all nodes participating in the network, over which every successfully performed transaction is recorded. And the blockchain is not limited to monetary applications. Borrowing from the same ideas (though not using the actual peer-to-peer network bitcoin runs on), a variety of new applications have adapted the bitcoin protocol to fulfill different purposes: Namecoin for distributed domain name management; Bitmessage and Twister for asynchronous communication; and, more recently, Ethereum (released only a month ago).

Home - FourthSector.net. GrantTree, How to bring in an org chart - multiple times over. Three modern organisational structures. I found this gem by Aaron Dignan linked via this previous article. 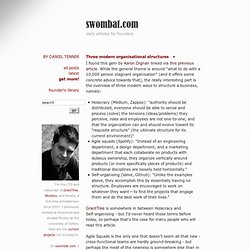 While the general theme is around "what to do with a 10,000 person stagnant organisation" (and it offers some concrete advice towards that), the really interesting part is the overview of three modern ways to structure a business, namely: Holacracy (Medium, Zappos): "authority should be distributed, everyone should be able to sense and process (solve) the tensions (ideas/problems) they perceive, roles and employees are not one-to-one, and that the organization can and should evolve toward its “requisite structure” (the ultimate structure for its current environment)"Agile squads (Spotify): "Instead of an engineering department, a design department, and a marketing department that each collaborate on products with dubious ownership, they organize vertically around products (or more specifically pieces of products) and traditional disciplines are loosely held horizontally. 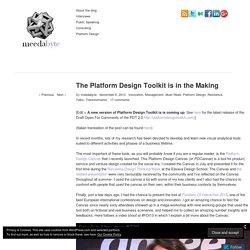 See here for the latest release of the Draft Open For Comments of the PDT 2.0 (Italian translation of the post can be found here) In recent months, lots of my research has been devoted to develop and learn new visual analytical tools suited to different activities and phases of a business lifetime. The most important of these tools, as you will probably know if you are a regular reader, is the Platform Design Canvas that I recently launched.

This Platform Design Canvas (or PDCanvas) is a tool for product, service and venture design created for the social era. Finally, just a few days ago, I had the chance to present the tool at Frontiers Of Interaction 2013, one of the best European international conferences on design and innovation. KORUZA – wlan slovenija development. ​Luka Mustafa - Musti has recently been awarded the ​Shuttleworth Foundation Flash grant and ​NLnet grant for development of this project, as well as the ​IEEE ComSoc Student competition award. 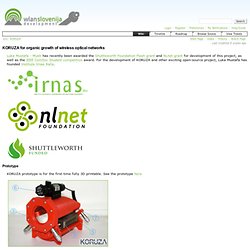 For the development of KORUZA and other exciting open-source project, Luka Mustafa has founded ​Institute Irnas Rače. Prototype ¶ Quote by Buckminster Fuller: We should do away with the absolutely specious ... Dawn of Autonomous Corporations, Powered by Bitcoin. Still waiting for Bitcoin to be accepted at Amazon and eBay? 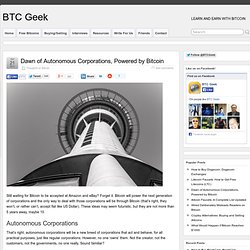 Decentralized, encrypted, secure email system. FABMoney: a p2p currency for collaboration in FabLabs. At Maker Faire Rome 2013 I gave a short presentation about Open Design during the main opening conference, but I also gave another presentation during a small conference about FabLabs and Peer-to-Peer Economy. I preferred to wait a bit and talk about it in a separate post, since it covers a project that I started by accident in 2012 but that I would like to develop further: FABMoney. we would encourage a social collaboration inside the FabLabs, and outside of their buildings and all over the world, enabling new business initiatives;at the same time, we would map the social capital of the collaborations inside the FabLab community (through social network analysis), understanding both the economical and the social impact of FabLabs. A further explanation: why not Bitcoin or one of its forks? FabMoney @ Pop Up Makers P2P Currencies for network collaboration.

FABMoney. Category:Health. Healthcare Startups Can Save Lives — And Rake in Big Money. Ron Gutman, the CEO and founder of Health Tap. Photo: Alex Washburn/WIRED Ron Gutman wants to bring back the village doctor. His three-year-old startup, HealthTap, offers an online service that duplicates at least a small part of the comfort and convenience we enjoyed in the days when doctors still made house calls. It lets you instantly connect with physicians via the net and ask them the most personal of medical questions. “You can’t bring back the village doctor himself,” says Gutman, the founder and CEO of the Palo Alto, California startup. Reinventing Life Science Startups – Evidence-based Entrepreneurship. What if we could increase productivity and stave the capital flight by helping Life Sciences startups build their companies more efficiently?

We’re going to test this hypothesis by teaching a Lean LaunchPad class for Life Sciences and Health Care (therapeutics, diagnostics, devices and digital health) this October at UCSF with a team of veteran venture capitalists. Part 1 of this post described the issues in the drug discovery. Part 2 covered medical devices and digital health. Forty years until we get "personal nanofactories"? Forty years ago the historian & broadcaster James Burke predicted the widespread use of personal computers, collection and storage of sensitive information and a political struggle against the introduction of identity cards.

Natural Selection has Rewarded those who Contribute to the Community with Long Life. New research supports a thesis that makes us feel all warm and fuzzy inside – and that feeling itself is good for our health and longevity. People who seek gratification through personal aggrandizement and accumulation of wealth may achieve a kind of hedonistic satisfaction, but this leads to negative health consequences and shorter life span. Meanwhile, people who seek fulfillment through service, dedication to cooperative efforts and shared values tend to have better health and longer lives. Swarm! Google Glass Game – our chance to build the first MMO for Glass. CrowdOptic - Focus-Based Services for Live Events. Twitter Directory and Search, Find Twitter Followers.

Help. Physical infrastructure for resilient living, off the grid if possible - tuxweave's posterous.