innovateXpress aim to provide brief information about different Startup Stories. It will tell you the journey about the successful Startups and how they reach to "Something" from "Nothing". It also focuses on delivering News and Articles that is trending on Social Media platforms related to multiple things. 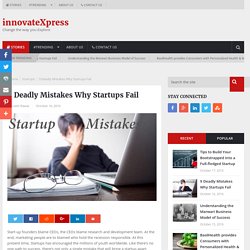 At the end, marketing people are to blamed who hold the recession responsible. At this present time, Startups has encouraged the millions of youth worldwide. Like there’s no one path to success, there’s not only a single mistake that will bring a startup apart. There are many reasons for it. Understanding the Marwari Business Model of Success. Understanding the Marwari Business Model of Success Are Marwaris a spent energy in Indian business? 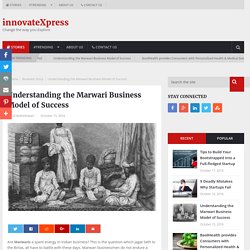 This is the question which Jagat Seth to the Birlas, all have to battle with these days. BasilHealth to Provide Personalized Health & Medical Data. The passion to create BasilHealth is completely personal. 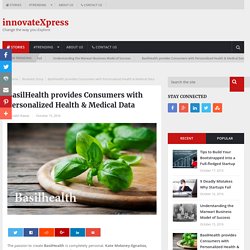 Kate Moloney-Egnatios, Founder and CEO has spent the last five years developing the technology. He got involved in 2 life threatening accidents and a lengthy recovery. He faced incredible challenges in the healthcare system. He had incomplete health records, inaccurate data and trouble finding the right doctors. The name takes the name of the basil leaf known for medicinal properties. Roomi, USA Based StartUp Launches its Services In India. The USA based rental and shared housing startup Roomi has started its services in Delhi, India. 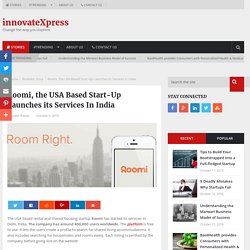 The company has around 400,000 users worldwide. The platform is free to use. It lets the users create a profile to search for shared living accommodations. It also includes searching for housemates and rooms easily. Google's New Pixel Smartphones, Takes on Amazon's Echo. Google is taking leads at Amazon, Apple, and Samsung with its new line-up of hardware products declared Tuesday. 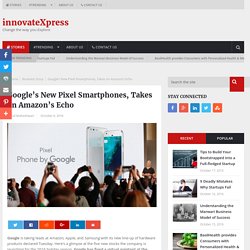 Here’s a glimpse at the five new stocks the company is launching for the 2016 holiday season. Google has fixed a virtual assistant at the heart of its latest smartphones and prime voice-activated speaker. The Alphabet Inc. unit Tuesday unveiled a wireless speaker called Home to get on Amazon.com Inc.’s Echo and two versions of a brand-new high-end smartphones named Pixel aimed at fighting Apple Inc.’s iPhone.

Traffic Time to be Included in Office Hours - European Court. The people of UK have an answer next time their bosses asks them to avoid the traffic jam in order to reach office early. 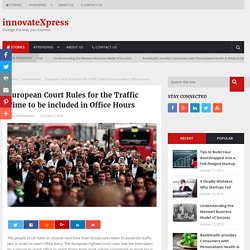 The European highest court rules that the time taken by a person to reach office or reach home from work will be considered as ‘work hour’. Unfortunately, there is no respite in India where one is engrossed in meeting deadlines and client meetings. The people from marketing, sales, customer services and emergency services spend more hours running around in the city traffic because of the field job. This case was ruled since a lot of employees faced salary deduction for reaching office late due to traffic jams. Employers around the UK won’t be much happy while on the contrary employees welcome this verdict with open arms. 6 Education Startups Changing the way India Learns! As per a survey by HSBC, children’s education is the primary purpose of 51% of the families. 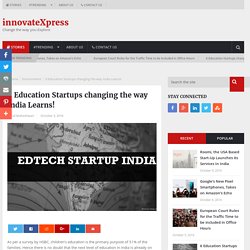 Hence there is no doubt that the next level of education in India is already on the move with some amazing education startups. Most of these startups have a wide pool of faculty, study material, and technology. The education start-up comprises of student community from different fields. 6 Tips to Boost Your Income through YouTube Channel. YouTube has been popular across the globe especially for the budding talents. 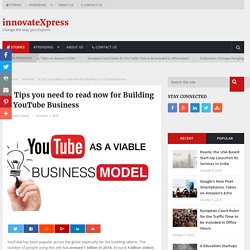 The number of people using this site has crossed 1 billion in 2016. Around 4 billion videos are viewed on YouTube daily. The creators have a huge number of followers and popularity which has made their passion into successful business. 5 reasons Why Nigeria is the Next Silicon Valley. Enjoying cocktails with entrepreneurs in The Battery, chatting away with venture capitalists on Sand Hill Road, San Francisco’s Silicon Valley is the fanciest hole for geeks. 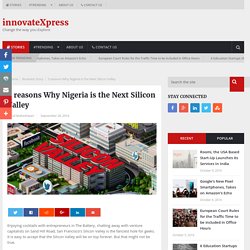 It is easy to accept that the Silicon Valley will be on top forever. But that might not be true. It’s about time someone did something about it. Swiggy Funding makes It Next Best Thing after Zomato. Swiggy is an online food delivery start-up based in Bangalore. 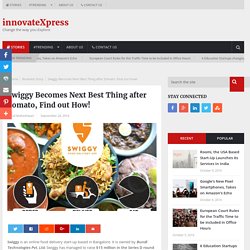 It is owned by Bundl Technologies Pvt. Ltd. Paytm Introduced New Feature to Collect Toll Charges. Paytm has a new delight to offer its users. Now pay highway toll charges with Paytm. The National Highways Authority of India and online payment platform has signed a deal that will allow cashless transactions for highway tolls using ‘Rfid’ (Radio-frequency Identification) tags. NHAI in April had introduced ‘FASTag‘, a device that uses Rfid technology for making toll payments directly from a prepaid account. India and Hyperloop Technologies to Work Together. Excited to see Hyperloop in India? Share your views! Imagine travelling from Chennai to Bengaluru in less than 30 minutes for a fraction of the cost of air travel today. It sounds exciting as it was only read in comic books about fast travel. Growing Interest of French Startups in Indian Startups. France and India are following the same path towards tech entrepreneurship and a lot of similarities between the two countries with regards to startups.

In 2013, the French government started a global program called “French Tech Ticket” for startups across the world to participate. Since then, it’s now in Season 2 and looking forward to India as a key partner. French Tech Ticket wants to utilize India’s fast-growing entrepreneurial ecosystem. Tourism Startup race towards Karnataka's Hackathon. The Karnataka Startup Cell is organizing a “Hackathon” along with the Tourism Department of the State.

The agenda is to promote tourism with an integration of technology. The hackathon, also called ‘Pitch to the Government’ is an opportunity for startups working on apps for the tourism sector. The winners will be eligible for a funding of INR 50 Lakh ($75K). Indian Finance Minister to Launch Pension Portal. The Finance Minister of India, Arun Jaitley launched a new web portal for Pension of senior citizens. This new initiative will be taken up by CGA, will be known as Web Responsive Pensioner’s Service Portal. It was developed by Central Pension Accounting Office (CPAO). Startup that takes all kinds of Contraceptive orders via SMS. A Brilliant move by France to permanently ban plastic! Paytm Founder the Richest Entrepreneur under 40. Smart shoes in the United States by an Indian startup. Signifyd raised $19 million to protect online fraud protection-innovatexpress.