Will Parineeti Be Murdered Or Saved By Arjun Kapoor? Bollywood stars Arjun Kapoor and Parineeti Chopra’s latest film is on the slate. 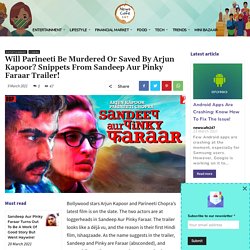 The two actors are at loggerheads in Sandeep Aur Pinky Faraar. The trailer looks like a déjà vu, and the reason is their first Hindi film, Ishaqzaade. As the name suggests in the trailer, Sandeep and Pinky are Faraar (absconded), and meanwhile, on the way, some bones were broke. The makers dropped the second trailer of the film starring Parineeti Chopra and Arjun Kapoor on Tuesday.

Qismat 2 & Others: New Punjabi Movies Releasing In 2021! New Hindi movies are on their way to entertain the audience this year after a pause that the fraternity had to face last year. 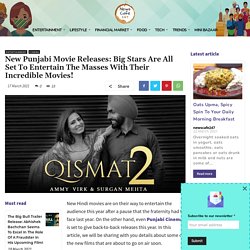 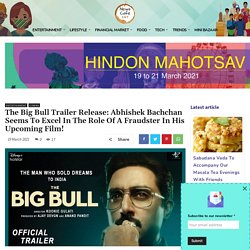 The movie is directed by Kookie Gulati; the film is loosely tied with the story of fraudster Harshad Mehta. He was an infamous stockbroker who was charged with distinguished financial crimes at the time of the Securities Scam of 1992. Junior Bachchan will be seen playing the part of Harshad Mehta onscreen. Bigg Boss 14 Fame Nikki Tamboli Tests Positive For Covid -19! SATISH KAUSHIK TESTS POSITIVE FOR CORONAVIRUS! Rakhi Sawant Is Shooting For A Web Drama Titled Tawaif Bazaar-E-Husn! All-time entertainer and Bigg Boss 14 fame sensational star Rakhi Sawant has started shooting for a new web show titled Tawaif Bazaar-E-Husn. 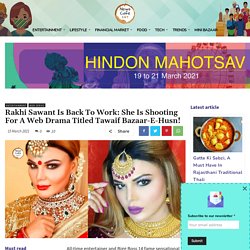 The actress–dancer, took to her social media and informed her fans about this news. Rakhi posted a clip from the shoot of the show on her Instagram handle. In the video, Rakhi Sawant is seen enacting a scene from the show for the camera. She posted a clip and captioned it, “Shooting for my new series OTT Tawaif Bazaar-E-Husn directed by Marukh Mirza.” As per her reply to one of the people who commented on her Instagram post, she says that it is very difficult to act and portray the character of a Tawaif (Courtesan) in front of the camera. However, the details about the web show’s release, co-stars and more are yet not out. Aamir Khan Will No Longer Be On Social Media Platforms! According to the reports by the star himself, Bollywood’s Mr. 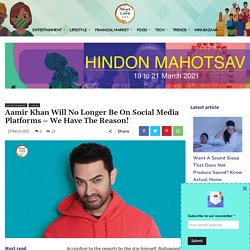 Perfectionist Aamir Khan bids farewell to social media accounts, and he announced the same on Monday. He has decided to leave the social media platforms and updated that the production banner’s official account will intimate the future projects in which he will be playing a part. Aamir, who turned 56 yesterday, thanked his well-wishers and fans for their wishes and immense love that they have delivered through the years. Pooja Hegde Shares The Poster Of Prabhas Co-Starrer Radhe Shyam! The Bollywood actress has wished everyone on the occasion of Maha Shivratri in an all-new way on her social media handle. 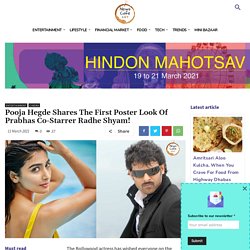 The style of sharing was a bit different, as she shared a new poster of Radhe Shyam. The film will be releasing in many languages with the help of dubbing. Mentioning about the same, she captioned the post, “Some call it madness, we call it love. This love story will forever be etched in your hearts! Toofan's Teaser Featuring Farhan Akhtar Is Out! Toofan, an Amazon Prime Video original, is a sports drama featuring Farhan Akhtar, which is about to make its way to the audience. 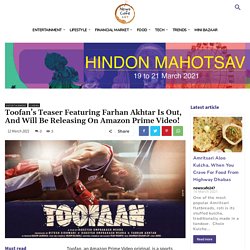 The movie featuring Farhan playing the role of a boxer will be releasing on the OTT platform on the 21st of May, as revealed by Amazon in a press release. Rakeysh Omprakash Mehra has directed the movie Toofan, which will also be studded with ace Hindi film stars like Paresh Rawal, Mrunal Thakur, Supriya Pathak Kapur, and Hussain Dalal. The project is the second venture collaboration between Rakeysh Omprakash Mehra and Farhan Akhtar after their 2013 hit biopic, Bhaag Milkha Bhaag, based on the life story of a popular Indian athlete Milkha Singh.

Sidharth Shukla Has An Important Piece Of Advice For The Boys! 2 min read Famous TV actor Sidharth Shukla is known for his befitting replies, tweets and answers on distinguished social media platforms. 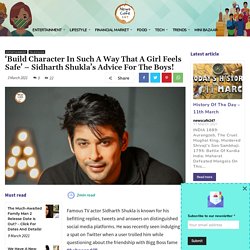 He was recently seen indulging in a spat on Twitter when a user trolled him while questioning about the friendship with Bigg Boss fame Shehnaaz Gill. He is back again with another intelligent tweet about an incident that has disturbed him and the countrymen. The actor commented on the same and has a piece of advice for the boys out there. Taking to his official Twitter handle, he tweeted, “Reading and hearing of all what’s happening around would just like to say please build your character in such a way that a girl feels safe with you even in a dark room.” 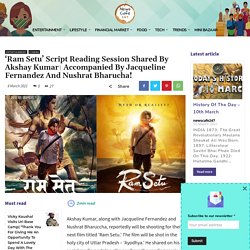 The film will be shot in the holy city of Uttar Pradesh – ‘Ayodhya.’ He shared on his social media portals a glimpse from the reading session of his upcoming Hindi film with the producer, director, and the other two actresses. Khiladi Kumar has finally started working on his upcoming motion work. Vicky Kaushal Visits Uri Base Camp in Kashmir Yesterday! < 1 min read Vicky Kaushal recently visited the Uri Base Camp in Kashmir after he was invited. 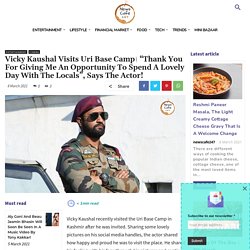 Sharing some lovely pictures on his social media handles, the actor shared how happy and proud he was to visit the place. Aly Goni And Beau Jasmin Bhasin Will Soon Be Seen In A Music Video! 2 min read Bigg Boss fame close friends Aly Goni and Jasmin Bhasin are ready to feature in a music video together. Tony Kakkar’s next song Tera Suit will be featuring the famous couple and the video will be out on the coming Monday, March 8.

Aly and Jasmin Bhasin took to their social media handles and updated their fans with the first look of the song on their respective Instagram pages. “And here it is #TeraSuit by @tonykakkar ft. Saina Teaser Release: Parineeti Chopra Looks Impressive! 2 min read Parineeti Chopra is all set to make a mark in her upcoming movie Saina. She will be playing the part of Saina Nehwal in the upcoming biopic that is titled Saina. Gauahar Khan's Father Zafar Ahmed Khan Has Left The World! < 1 min read Bigg Boss fame Gauhar Khan’s father, Zafar Ahmed Khan, is no more. He left for his heavenly abode this morning after the recent wedding of his Younger daughter Gauahar Khan with Zaid Darbar.

Her father was going through treatment in a hospital based in Mumbai, which Gauahar herself shared. Gauahar took to her Instagram and informed about the sad news with friends and fans. Harshdeep Kaur And Husband Welcome Home A Baby Boy! 2 min read It is the good news of a star kid again; it seems like the year is all about happy news for the star families. After getting much good news of new family additions and pregnancies from the stars, Harshdeep Kaur, a famous Bollywood Singer, has also joined the league and shared on her Instagram about the arrival of a baby boy in their family. Entertainment News – 3 Reasons Why Sanya Malhotra’s Pagglait Could Be A Must Watch. Beauty Tips - 9 Weird And Fun Facts About Eyelashes.

Celebrities News – Baby coming soon l As Kishwer Merchantt announces pregnancy. List of New Hindi Horror Film. Beauty Tips - Reasons Why You Should NEVER Sleep With Wet Hair. Travel News – Family Holiday Destinations in India To Visit In 2021. Health Tips - Facial Exercises For A Defined, Muscular Jawline. 15 Foods That Can Help Your Hair Grow Faster, According to Nutritionists. Sriti Jha - A Commendable Journey From An Actor To Television Celebrity. Bollywood Has New Releases As Theaters Have Opened on Full Swing! 3 min read As the theaters have opened with full occupancy and the cinema world will finally be running normally, several movies are lined up in a row to be released on the silver screen for the movie buffs. We have a list of 6 Hindi movies lined up for their release in the theaters and are studded with big stars and names. Please scroll down to know the names of the film that will be released in cinema halls and their release dates.

Bhoot Police The much-awaited film starring Saif Ali Khan, Arjun Kapoor, Yami Gautam, and Jacqueline Fernandez, Bhoot Police, is ready to hit the masses. The film will hit the theaters on 10th September 2021. Mumbai Saga A Sanjay Gupta Directorial Mumbai Saga is all set to be released for the fans. The film will hit the theaters on 19th March 2021. Chehre Another one on the list is the film – Chehre that has to be released this year, and the dates have come out. The film is all set to hit the theaters on 30th April 2021. Entertainment News - Cinema Halls To Operate At Full Occupancy From February 1. Gangubai Kathiawadi Teaser Twitter Review: Netizens give thumbs up and shower praise on Alia Bhatt. Fat Shaming Responses l How to Respond when Someone Body Shames You.

Bollywood Movies - After Sooryavanshi in April, Ranveer’s 83 To Release on This Date. Bigg Boss 14: Terrible Fights Among The Bigg Boss House Members. Celebs Gossips - Celebrity Women Who Make Way More Money Than Their Famous Husbands. R Madhavan awarded honorary degree for contribution to cinema actor says it is an ‘honour and responsibility’ Health and Beauty Tips – A skincare routine for the lazy man.

Mommy Indian Bloggers That You Must Follow If You Are Expecting! The Best Metallic Lipsticks To Bring Back The 90s Vibe In Your Makeup! Celebrities News - These Wedding Pictures Of Dia Mirza And Vaibhav Rekhi Look Divine. Celebrities Gossips - Rahul Vaidya & Disha Parmar Have Decided When They’re Tying The Knot. Travel News - 10 Utterly Gorgeous Virgin Beaches In India For Those Who Prefer Exclusivity. Wedding Bells - Great Ideas To Have A Fantastic Bachelorette Party. Celebrity Gossips – Sandeep Nahar Dies By Suicide Fans Pour Tributes.

Celebrities who left us in 2020. Kangana Ranaut urges government to demolish 'Twitter' in India. Travel News : 10 Amazing Things To Do At Lakshadweep For A Perfect Trip. The ultimate 90s playlist! l Shake a Leg With These Evergreen Retro Songs for Dance. Entertainment news : Little known facts about Diljit Dosanjh. Health Benefits-Ways to Keep Your Fruits and Veggies Fresher for Longer. Delhi Pollution : How air pollution is impacting pregnant women and children. The Sexism Of Hindi Films: Dialogues That Show What Bollywood Thinks Of Women. Latest Gadgets News l Realme C2 Price in India Specifications Comparison.