From Library to Learning Commons NESLA. Always learning. Reflections on the ECIS Conference Since I accepted the position of 21st Century Literacy Specialist at ISB just over a year ago, I’ve been thinking about how natural the connection is between the library and technology. 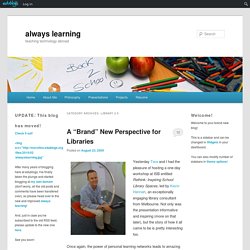 Granted, I had never worked in a library before I set foot in our fabulous Learning Hub this past August, but having been a technology facilitator for seven years, I knew how much more I could accomplish when working in collaboration with the librarian. And, now, after attending the excellent ECIS Librarians Conference in Berlin last week, I can see an even stronger connection between these two essential resource teams. As an outsider roaming incognito amongst the librarians of European international schools, I have to admit I felt a little bit of an impostor, but I am definitely glad I went! Big Idea Number One: How Technology Facilitators Can Help Librarians. Library Design Showcase 2012: Super Schools. With the success of the recent White House petition on school libraries, the American public has asserted its support for this vital aspect of childhood education. 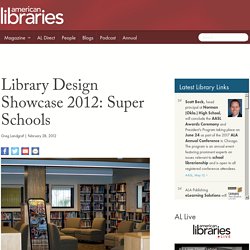 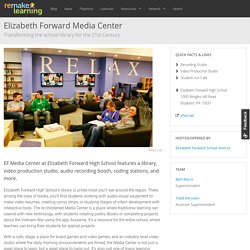 Elizabeth Forward High School’s library is unlike most you’ll see around the region. There, among the rows of books, you’ll find students working with audio-visual equipment to make video resumes, creating comic strips, or studying stages of infant development with interactive tools. Divine Design: How to create the 21st-century school library of your dreams. Things are changing. 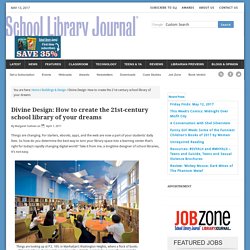 For starters, ebooks, apps, and the web are now a part of your students’ daily lives. So how do you determine the best way to turn your library space into a learning center that’s right for today’s rapidly changing digital world? Take it from me, a longtime designer of school libraries, it’s not easy. Things are looking up at P.S. 189, in Manhattan’s Washington Heights, where a flock of books (fabricated from sheet metal) soars beneath a digitally printed sky, turning florescent light fixtures into inspiring works of art.

The libraries shown in this article are located in some of New York City’s poorest neighborhoods, and were created as part of an initiative by the Robin Hood Foundation-a leader in school library design-and the New York City Department of Education. MLEs – library space. Last week I had the privilege of working with the staff at Auckland Girls Grammar School, where they've been working for some time on how they integrate digital technologies into their teaching and learning programmes. 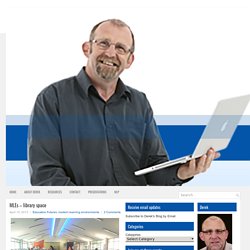 The strategic approach to their thinking and planning extends to the way they've re-designed their library space to provide a wonderful open 'learning centre' that provides a sense of 'flow' that embraces access to traditional paper-based books and resources through to a technology support area where students can book out netbooks and other technologies such as cameras etc. for them to use in conjunction with their learning in this space. Also included in this end of the space are rooms that can be used for audio and video work (including a green room), plus plans to introduce a video conferencing room in the near future. The Robin Hood Library Initiative (The Best of Book Riot)

Much of the good ship Book Riot is off at Book Expo America this week, so we’re running some of our best stuff from the first half of 2013. 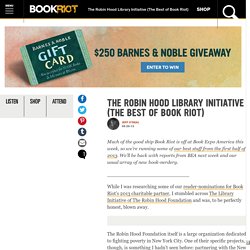 We’ll be back with reports from BEA next week and our usual array of new book-nerdery. While I was researching some of our reader-nominations for Book Riot’s 2013 charitable partner, I stumbled across The Library Initiative of The Robin Hood Foundation and was, to be perfectly honest, blown away. The Robin Hood Foundation itself is a large organization dedicated to fighting poverty in New York City.