Sushant Singh Rajput Dil Bechara Earns $268 Million in 24Hrs - INewzTimes. According to a report by Mid-Day, a representative for Disney+ Hotstar believes that the number is comparable to viewership figures of the immensely popular Game of Thrones. 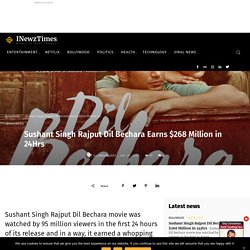 The rep further stated that if one wishes to compare Dil Bechara with Game of Thrones then “this was possible even though the latter had a pre-existing viewer-base, while the film [did not]. Then again, Hotstar promoted Dil Bechara from the onset, marketing its release date and time well in advance. Viewers showed up in unison to watch it.” As previously reported, Dil Bechara is Sushant Singh Rajput’s last movie as the actor died by suicide on June 14, before it has been announced that The Fault in Our Stars Bollywood adaptation would release only on Disney+ Hotstar. As a tribute to late Sushant, the movie is made available for free for everyone to watch by Fox Star Studios. Trans Woman Sex-Change Op Left Her With 3-Inch Vagina - INewzTimes. A 23-year-old Thai beauty is suing a clinic over a sex-change operation. 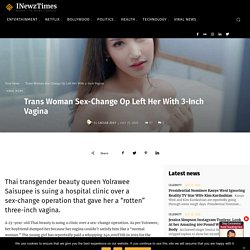 As per Yolrawee, her boyfriend dumped her because her vagina couldn’t satisfy him like a “normal woman.” The young girl has reportedly paid a whopping 240,000THB in 2019 for the operation but the results were botched and her genitals couldn’t function properly. Exorcist Claims Possessed Woman Spoke Demonic Language - INewzTimes. Bishop Plato Angelakis — an ordained Orthodox Catholic priest with the Oblates of St. 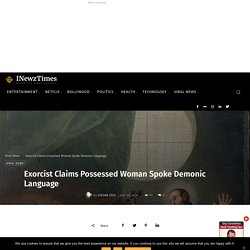 Therese in Wisconsin, US, has talked about the very first exorcism that involved himself, a small group of priests, and a woman who was possessed by an evil spirit. Also Read: Paranormal Expert Claims to Summon Sushant Singh Rajput’s Spirit [WATCH] Google To Improve Chrome Impact on Apple MacBook Battery - International Newz Times. The MacBook Air laptops that are manufactured in 2015 or before, constantly faces the overheating and battery draining issues. 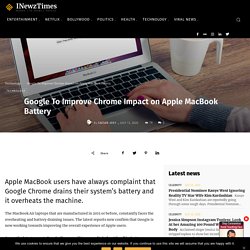 The latest reports now confirm that Google is now working towards improving the overall experience of Apple users. As per the latest report, Google Chrome will improve “tab throttling” by better prioritizing active tabs and limiting resource drains from those tabs that are left open in the background. Background tabs always have a very negative effect on a browser’s performance, especially on the life of a system’s battery.

To overcome this issue, Google has been placing several restrictions on the background tabs for the last several years. Google’s director of Chrome browser engineering, Max Christoff recently stated that this is an ongoing investment from the developer’s part to improve the speed and performance of the battery life. TikTok May Comeback In India - International Newz Times. TikTok — one of the most popular social media platforms got a permanent ban in India over the ongoing conflict with the People’s Republic of China. 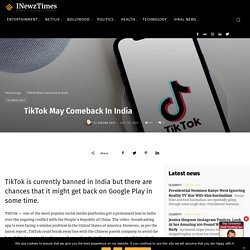 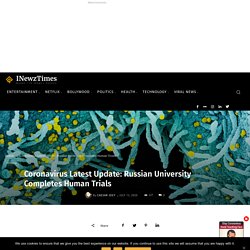 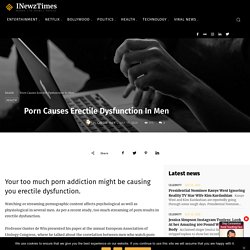 G-Spot Finally Promised By New Sex Position - INewzTimes. In a recent blog, Ann Summers outlines the technique to acquired the said result, “Lying face-down, have your man enter you from behind. 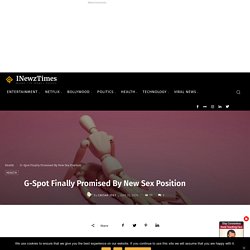 For maximum pleasure, place a pillow beneath your hips – this slight change in angle means that you’ll soon be on the receiving end of some intense, G-spot stimulation. For a more intense session, encourage your partner to rest his chest against your back; forget doggy – this close contact makes The Speed Bump, the most intimate position from behind.” As per Ann Summers, this gives G-spot stimulation a lot easier that leads to more mind-blowing orgasms. Donald Trump Wears Masks Amid Coronavirus Pandemic - International Newz Times.

Over the last couple of weeks, President Trump chose not to wear the protection mask requested by several health organizations. 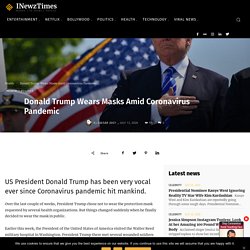 But things changed suddenly when he finally decided to wear the mask in public. Earlier this week, the President of the United States of America visited the Walter Reed military hospital in Washington. President Trump there met several wounded soldiers and health care workers, and a protective measure, he chose to cover his face with the mask. While talking about using the mask, President Trump stated he has “never been against masks” but he believes that there are times and places to wear it. Donald Trump on 2020 Election Results: 'I’m not losing' - INewzTimes. The entire world, especially millions of Americans are thoroughly concentrating on the forthcoming election as Democratic nominee Joe Biden leads Donald Trump by 8 percent. 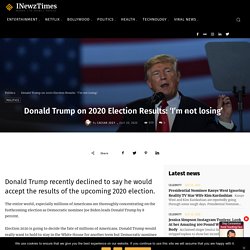 Election 2020 is going to decide the fate of millions of Americans. Donald Trump would really want to hold to stay in the White House for another term but Democratic nominee Joe Biden is leading him by several major points. However, President Trump made this clear that he is not going to believe the poll results as he knows that they are fake. While talking to Fox News Sunday host Chris Wallace in which President Trump repeatedly downplayed the coronavirus pandemic — the serious outbreak that has infected 3.7 million people in the United States alone and killed over 140,000 people. During the interview, Wallace talked about Fox News’ latest national poll results that show Joe Biden leading Trump by 8 percent. Netflix's Dark TV Show Is...Terrible - International Newz Times. Netflix’s Dark TV show season 1 and season 3 is poorly executed on multiple layers. When you talk about a show where there’s no storyline, no sense of direction, unempathetic characters, one of the worst background scores (in Dark season 1), you get something like Netflix’s Dark — something which is not even half of the Dark as the name tries to suggest here.

There are several people, including some of the great reviewers of our time who have compared Netflix’s Dark TV show to Stranger Things or David Lynch’s Twin Peaks. Free Netflix Subscription Charlize Theron Movie - International Newz Times. Netflix has announced it is giving away 83 years (1000 months) of subscription completely free to that user who can get the highest score in “The Old Guard” videogame. Earlier this week, Netflix released The Old Guard movie starring Charlize Theron. Sushant Singh Rajput Dil Bechara Title Track Latest Cover - INewzTimes. The movie is surely going to touch the hearts of Sushant’s millions of fans as everyone is doing something to show their love for the Bollywood star who committed suicide in June this year.

Nitin Akhand – a singer from Central India, along with an acclaimed movie director Pratik Mittal has come up with their version of a tribute to Sushant and his love for life. The singer has created a cover of A.R.Rahma’s composition and sung it in a way that it resonates with you for a long time. Check out the cover below: Dil Bechara movie is based on the much-acclaimed The Fault in Our Stars by John Green. The Bollywood adaptation is directed by Mukesh Chhabra and will star Sushant Singh Rajput and Sanjana Sanghi in the lead roles.

The Last of Us Part 2 Deserves All The Love & Admiration - International Newz Times. The game is set five years after the 2013’s The Last of Us and shows the adventure of Ellie in a more lonesome and cruel world. Minor Spoilers ahead: The Last of Us 2 shows two main protagonists, Ellie – who sets out for revenge, and Abby, a soldier who is deeply involved in a conflict between a cult and mercenaries. The game is played from the third-person perspective and allows the players to use firearms, improvised weapons, and stealth to defend themselves against enemies and cannibalistic creatures infected by a mutated strain. Breaking Bad Star Giancarlo Esposito May Star In MCU - International Newz Times. John Travolta Pays Tribute To Late Wife Kelly Preston - International Newz Times.

Amber Heard Allegedly Punched Johnny Depp After He Lost $750M - International Newz Times. If the recent reports are to be believed then the Aquaman movie actress, Amber Heard, allegedly punched her ex-husband Johnny Depp the very same day when he had lost a whopping $750 million and had massive financial troubles. Johnny Depp and Amber Heard are in the midst of an ugly lawsuit after Amber wrote an op-ed for The Washington Post, where she talked about her married life with Fantastic Beasts movie star Johnny Depp. Game of Thrones Is And Will Remain Best-Show Despite Season 8 - International Newz Times. Game of Thrones season 8 received criticism from all the fronts, but as it turns out, fans are still rewatching it and reliving one of the best TV-show of all time.

Paranormal Expert Claims to Summon Sushant Singh Rajput's Spirit [WATCH] - INewzTimes. A famous YouTuber and a paranormal expert allegedly summoned Sushant Singh Rajput’s spirit and even talked to it about the night before Sushant committed suicide. Steve Huff is known amongst his peers for his reviews on YouTube. He started making videos in 2012, but he got into the limelight after he started sharing videos of him talking to dead people’s spirits.