Online Peer Feedback For Indie Film Makers. In today’s culture, the practice of attending movie theaters is slowly being replaced by a growing number of online streaming services. 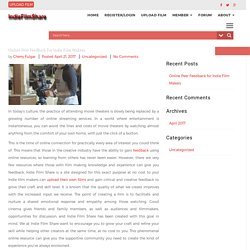 In a world where entertainment is instantaneous, you can avoid the lines and costs of movie theaters by watching almost anything from the comfort of your own home, with just the click of a button. This is the time of online connection for practically every area of interest you could think of. This means that those in the creative industry have the ability to gain feedback using online resources, so learning from others has never been easier. However, there are very few resources where those with film making knowledge and experience can give you feedback. Why Are Indie Films Better Than Conventional Films. Are you fed up of watching regular Hollywood movies? 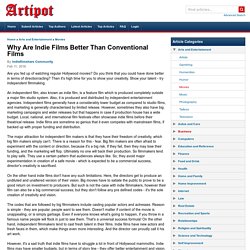 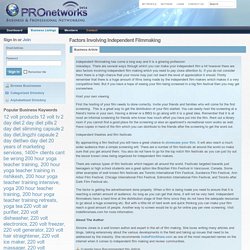 There are several ways through which you can make your independent film a hit however there are also factors involving independent film making which you need to pay close attention to. If you do not consider them there is a high chance that your movie may just not reach the level of appreciation it should. Firstly remember that there is a huge amount of films being made by the independent film makers which makes it a very competitive field. But if you have a hope of seeing your film being screened in a big film festival then you may get somewhere. Host your own viewing.

Independent Filmmaking Through The Ages. If you wish to be an independent filmmaker then trust me, you could not have been born in better times. 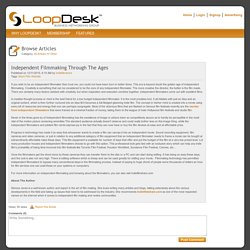 This era is beyond doubt the golden age of independent filmmaking. Creativity is something that can be considered to be the core of any independent filmmaker. The more creative the director, the better is the film made. There are certainly many factors clubbed with creativity, but when inspiration and execution combine together, independent filmmakers come out with excellent films.

A creative thought process or mind is the best friend for a low budget independent filmmaker. Progress in technology has made it so easy that whosoever wants to create a film can canvas it into an independent movie. Finding The Ideal Platform For Independent Filmmakers To Promote Their Productions (with image) · indiefilmshare.

There has always been huge support for commercial directors and film makers – primarily for the reason that these mainstream films are promoted through advertisements and made available to viewers via different media. 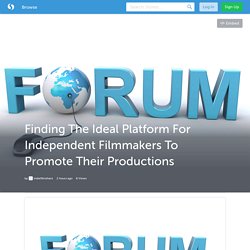 In addition to this most of these films automatically receive much fanfare and naturally require less promotional efforts. This has always been the norm for traditional mainstream cinema now and we also must admit the fact that this type of film making offers little room for change, experimentation and originality. On the other hand independent filmmaking gives one the scope of indulging in his creativity for coming up with original productions and can also explore unconventional methods difficult to find in commercial productions. Factors Contributing To the Growth of Independent Film Making. Anyone who regularly spends time on the web must have noticed a huge rise on the internet videos during the last year or so. 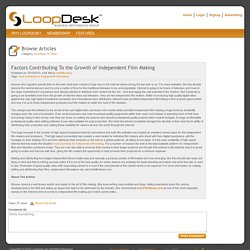 For many websites, this has already become the central element and it is only a matter of time for the traditional television to be unrecognizable. Internet is going to be future of television and most of the major entertainment companies have already started to distribute their content via the net – thus leveraging the vast potential of the medium. Short Films as a New Genre of Creative Film Making. Is the present generation witnessing a revolution in short independent film making? 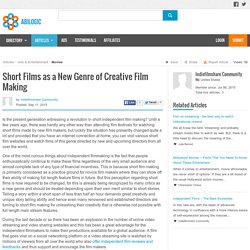 Until a few years ago, there was hardly any other way than attending film festivals for watching short films made by new film makers, but luckily the situation has presently changed quite a lot and provided that you have an internet connection at home, you can visit various short film websites and watch films of this genre directed by new and upcoming directors from all over the world. Indiefilmshare For Independent Film Making & Reviews. Independent Filmmaking At Indiefilmshare. Factors Responsible For The Growth Of Independent Filmmaking. Presently film industries from all over the world are facing a huge problem and that is a majority of their audience has moved onto the internet and no more depends upon traditional modes of consumption like movie theaters or DVDs for watching movies. 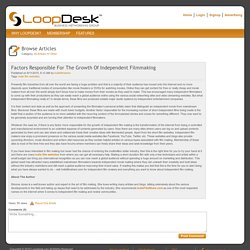 Online they can get content for free or really cheap and movie makers from all over the world simply don’t know how to make money from their movies as they used to make. This has encouraged many independent filmmakers to come up with their productions as they can easily reach a global audience online using the various social networking sites and video streaming websites. But what independent filmmaking really is? In simple terms, these films are produced outside major studio systems by independent entertainment companies. It is their content and style as well as the approach of presenting the filmmaker’s personal artistic vision that distinguish an independent movie from mainstream films. 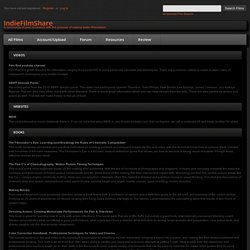 There are numerous videos to watch to learn many of hollywood's techniques on a smaller budget. SBIFF Director Panel Recorded panel from the 2010 SBIFF director panel. Websites The most exhaustive movie database there is. Books The Filmmaker's Eye: Learning (and Breaking) the Rules of Cinematic Composition This book combines conceptual and practical instruction on creating polished and eloquent images for film and video with the technical know-how to achieve them. The Five C's of Cinematography: Motion Picture Filming Techniques.