Godrej Properties net profit slides 65% in Q4 to Rs 18 crore. MUMBAI: The process to sell Tata Steel's UK assets has slowed down as the British government tries to convince the company to keep the business, three people familiar with the matter said, even as some potential buyers claimed that the steelmaker is dragging its feet. 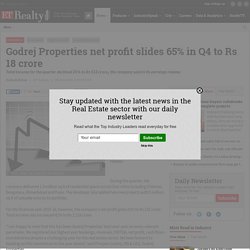 Tata Steel is exploring the reversal of the sale decision due to pressure from the referendum-bound UK government, sources said. The UK government is said to believe that Tata's exit will reflect badly on the country's business competitiveness. The Port Talbot plant is losing &pound;1 million (Rs 9.7 crore) a day. Ghaziabad devpt body invites tenders for projects.

MUMBAI: Lenders to Essar Steel have asked the company to prepare a new debt repayment plan. 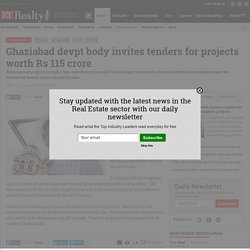 Bank officials will meet later this month to examine the company's proposal to repay loans of around Rs 40,000 crore. While two senior bankers said the need to come up with a fresh repayment plan was conveyed to the company after a core committee of bankers met on May 30 at the offices of the State Bank of India (SBI), an Essar Steel spokesperson said the company was unaware of any such meeting. Essar Steel had borrowed Rs 40,000 crore from 30 banks. The loan account has been classified as a non-performing asset after the steelmaker failed to repay on due dates.

Essar Steel owns India's most modern steel production complex with a capacity of 10 million tonnes. TMC running real estate syndicate in Kolkata, BJP says. Infosys gets govt nod to set up SEZ in Bengaluru - India Property Journal. NEW DELHI: The government has approved the proposal of Infosys to set up an IT/ITeS special economic zone in Bengaluru in an area spread over 4 hectares. 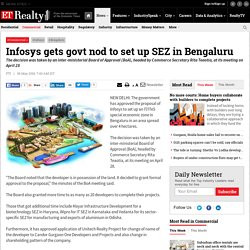 The decision was taken by an inter-ministerial Board of Approval (BoA), headed by Commerce Secretary Rita Teaotia, at its meeting on April 28. Microsoft scouts for 1.1 million sq ft office space in Bengaluru. SHENZHEN: A housing boom in China's wannabe "Silicon Valley" of Shenzhen risks undermining the city's tech boom as young professionals consider moving out to avoid the highest residential prices in the country. 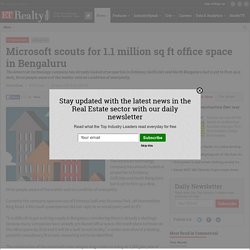 In the space of four decades, Shenzhen has transformed itself from a fishing village into a manufacturing centre and now a tech hub - attracting top firms and young talent in sectors including technology, advertising and design. But a property frenzy, which has driven prices up by 580 percent in the past 10 years, is beginning to weigh on the city's competitiveness, tech firms, professionals, industry groups and officials say, just as it strives to develop new economic drivers and pull away from old-economy manufacturing. The tech hub has drawn some of China's top names including internet giant Tencent and telecoms firm Huawei, plus emerging new leaders such as DJI, the world's biggest commercial drone maker, and gene mapping company BGI. Delhi-NCR has highest unsold housing inventory: Assocham. NEW DELHI: Levels of unsold inventory in the residential and commercial real estate segments have risen to between 18% and 40% in different cities with the maximum unsold stock lying in the Delhi NCR over the last one year, according to a new study by industry body Assocham. 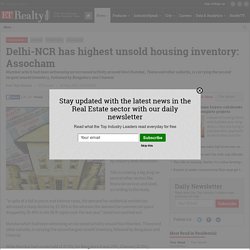 This is creating a big drag on several other sectors like financial services and steel, according to the study. "In spite of a fall in prices and interest rates, the demand for residential market has witnessed a steep decline by 25-30% in the whereas the demand for commercial space dropped by 35-40% in the NCR region over the last year," Assocham pointed out. Mumbai which had been witnessing an increased activity around Navi Mumbai, Thane and other suburbs, is carrying the second largest unsold inventory, followed by Bengaluru and Chennai. 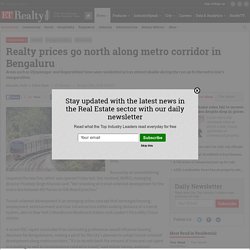 A report by Mumbai-based property research firm Liases Foras estimates that the unsold inventory in eight top cities rose by 22% in 2015-16. In the Mumbai Metropolitan Region alone, around 2.26 lakh apartments are lying unsold. In the National Capital Region, the unsold inventory rose 12% from 322 million sq ft in March 2015 to 361 million sq ft in March 2016. Assuming a flat size of 1,200 sq ft, that's more than 3 lakh units lying unsold in what was once regarded as the hottest real estate market in the country. While this may be heartening news for prospective buyers, it spells trouble for those on the other side of the table. With increased concerns around delays by developers in handing over possession of new properties, buyers are increasingly looking at ready-to-move-in or resale properties. Spruce up your home to boost its valueBefore you go hunting for a buyer, make your house attractive. Selling a house with an outstanding loan No loan. 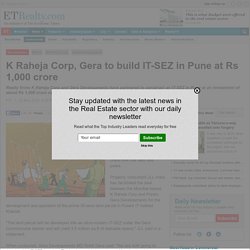 Property consultant JLL India has facilitated the deal between the Mumbai-based K Raheja Corp and Pune's Gera Developments for the development and operation of the prime 30-acre land parcel in Pune's IT hotbed Kharadi. "The land parcel will be developed into an ultra-modern IT-SEZ under the Gera Commerzone banner and will yield 3.5 million sq ft of leasable space," JLL said in a statement. When contacted, Gera Developments MD Rohit Gera said: "We are both going to develop this IT-SEZ together.

Nisus Finance invests in affordable housing with Shriram Land Development. An average delay of two three years, going up to seven or eight and even 12 years on the longer end, is symptomatic of the deep malaise in the real estate industry in NCR today. 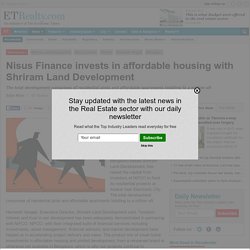 The flat market has been, well, flat for at least a couple of years now, kept in prolonged downturn by a vicious cycle -long delays in possession eroding buyer confidence, in turn drying up cash flow and leaving builders who had diver ted funds to launch new projects with little to finish the old ones. Why did this happen? 40 get notice for commercial use of property in Gr Noida. Projects in Noida Sec 107 stuck, buyers meet senior officers. An average delay of two three years, going up to seven or eight and even 12 years on the longer end, is symptomatic of the deep malaise in the real estate industry in NCR today. 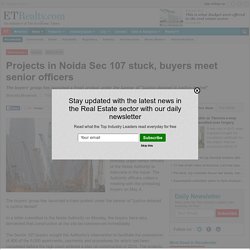 The flat market has been, well, flat for at least a couple of years now, kept in prolonged downturn by a vicious cycle -long delays in possession eroding buyer confidence, in turn drying up cash flow and leaving builders who had diver ted funds to launch new projects with little to finish the old ones. Why did this happen? Sebi comes out with FAQs in 13 languages for PACL investors - India Property Journal. KOCHI: The Local Fund Audit Department has found severe anomalies in recent land transactions by Greater Cochin Development Authority (GCDA). 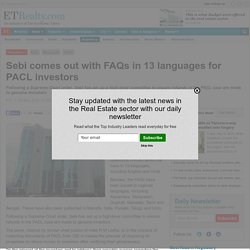 According to the audit report, GCDA authorities have caused huge revenue loss to the development agency by selling prime holdings at lower rates. HDFC Bank signs agreement with Lucknow Development Authority - India Property Journal. BEIJING: Chinese investments in India grew six-fold in 2015 to $ 870 million from the previous year while more investments are in the pipeline following easing of restrictions on Chinese firms and favourable tax rates, a state-run daily said ahead of President Pranab Mukherjee's visit.

Investment in India by Chinese companies in 2015 reportedly rose six-fold from 2014, partly thanks to low investment restrictions and favourable tax and land rent policies in the country, Global Times quoted Chinese business experts as saying. Maha govt refuses to ease TDR use restrictions - India Property Journal. KOLHAPUR: The state government has turned down the demand of the municipal corporation and city-based developers to ease the restrictions on using transfer development rights (TDR) for plots with road width less than 9m.

In the draft development control rules (DCR) framed in November last year, the state government had restricted the use of TDR for such plots. Moreover, the government had also linked the use of TDR with the actual plot size. TDR means making available certain amount of additional built-up area in lieu of the area relinquished or surrendered by the owner of the land, so that he can use the extra built-up area either for himself or transfer it to another in need of the area for an agreed sum of money. It is designed to steer growth and not to limit or stop development. Big cheer for home buyers as Real Estate Bill becomes an Act now. NEW DELHI: The Real Estate (Regulation and Development) Bill, 2016, became an Act on May 1, kick-starting the process of making rules as well as putting in place institutional infrastructure to protect the interests of home buyers in India.

While acknowledging that the act is a positive development, property experts said the new rules should address problems faced by builders in getting sanctions and approvals in a timely manner. "Government authorities should also be made accountable for timebound approvals through the rules that will be made," said Anshuman Magazine, managing director of property advisory firm CBRE South Asia. He said that if this happens, it will be one of the major steps towards the recovery of the Indian real estate market and will improve the confidence of both consumers and institutional investors - domestic or foreign. "Of course, it should not become another hurdle for development, which will then raise property prices in the long term," said Magazine. Redevelopment stops, 500 Dadar families lose roof and rent.

MUMBAI: In the heart of Dadar, the bastion of 'Marathi Manoos', a human tragedy is silently unfolding. An estimated 500 families, mainly middle and lower income Maharashtrian tenants, are languishing after builders, redeveloping their properties, stopped paying rents for their alternative accommodations. Developers have been unable to complete the projects, and worse, residents are now stranded because their buildings were demolished several years ago.

At least three of these redevelopment projects are within a couple of hundred metres of each other in Dadar (west)--one of the major ones right next to Sena Bhavan. Last year, an 80-year-old woman, Prabha Anande, wrote a heart-rending letter to chief minister Devendra Fadnavis about her plight. She is one of the over 160 tenants of Chapra building near Dadar's Plaza cinema, who have been stranded since almost a decade after work stopped on their project. "Over 120 families are virtually on the road. Pay Rs 5 lakh rent if you want to stay in SoBo flat : Bombay HC. MUMBAI: Mumbai Port Trust (MbPT) chairman Sanjay Bhatia, on Monday, said a global tender will be floated in 10 days to appoint a project management and implementation consultant, who will create a master-plan for the proposed port-land development at the country's oldest harbour.

Creating basic infrastructure will take two to four years, he said, adding the final action plan will draw from the numerous committee reports which have been presented till now by a slew of stakeholders, including citizen groups, industry lobbies, etc. "Till now, the plans that have been made are general. We do not have a detailed master-plan enlisting where to build a road, a marina or a restaurant. I need to appoint a consultant for that," Bhatia, who took over as the chairman recently, said.