All-New Tata Safari Vs 2021 MG Hector Plus - Specs And Dimensions Compared. Hyundai Kona EV Gets Discounts of Up To Rs 1.5 Lakh. Ahead of the launch of the new Kona facelift, Hyundai is offering huge benefits for buyers of this electric SUV. 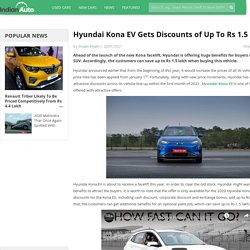 Accordingly, the customers can save up to Rs 1.5 lakh when buying this vehicle. Hyundai announced earlier that from the beginning of this year, it would increase the prices of all its vehicles in India. The price hike has been applied from January 1st. Fortunately, along with new price increments, Hyundai has offered some attractive discounts across its vehicle line-up within the first month of 2021. Hyundai Kona EV is one of the models to be offered with attractive offers. 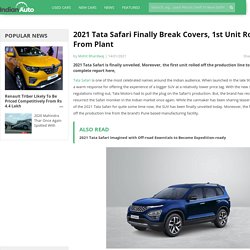 Moreover, the first unit rolled off the production line today. Read the complete report here, Tata Safari is one of the most celebrated names around the Indian audience. When launched in the late 90s, the Safari received a warm response for offering the experience of a bigger SUV at a relatively lower price tag. 2021 Tata Safari Teased Again, Shows Second-row Captain Seats. Tata has been releasing teasers for the new Safari every day and will keep doing it till it launches later this month. 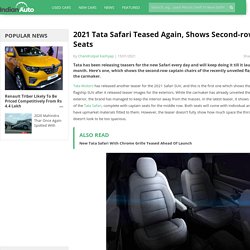 Here's one, which shows the second-row captain chairs of the recently unveiled flagship offering of the carmaker. Tata Motors has released another teaser for the 2021 Safari SUV, and this is the first one which shows the interiors of the new flagship SUV after it released teaser images for the exteriors. While the carmaker has already unveiled the new-gen Safari's exterior, the brand has managed to keep the interior away from the masses. In the latest teaser, it shows the 6-seater version of the Tata Safari, complete with captain seats for the middle row. Both seats will come with individual armrests and looks to have upmarket materials fitted to them. Everything You Need To Before Buying Pre-owned Honda City. Here are a few tips one should keep in mind before purchasing a pre-owned Honda City. 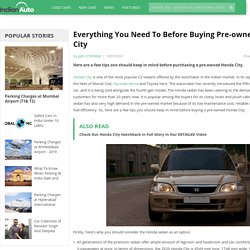 Honda City is one of the most popular C2-sedans offered by the automaker in the Indian market. In its segment, it rivals with the likes of Maruti Ciaz, Hyundai Verna and Toyota Yaris. The automaker has recently introduced the fifth-gen model of the car, and it is being sold alongside the fourth-gen model. The Honda sedan has been catering to the demands of the Indian customers for more than 20 years now. It is popular among the buyers for its classy looks and plush cabin. Firstly, here's why you should consider the Honda sedan as an option. IndianAuto — Nissan Magnite XV Detailed in Walkaround Video,... Jeep Compass Facelift Price List To Be Revealed On February 4. Jeep Compass facelift is ready to go on sale in India. 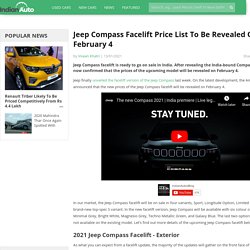 After revealing the India-bound Compass facelift, Jeep now confirmed that the prices of the upcoming model will be revealed on February 4. Jeep finally unveiled the facelift version of the Jeep Compass last week. On the latest development, the American car brand announced that the new prices of the Jeep Compass facelift will be revealed on February 4. In our market, the Jeep Compass facelift will be on sale in four variants, Sport, Longitude Option, Limited Option along with a brand-new top-spec S variant. In the new facelift version, Jeep Compass will be available with six colour options, Exotica Red, Minimal Grey, Bright White, Magnesio Grey, Techno Metallic Green, and Galaxy Blue. New MG Electric Compact SUV Planned For India, To Rival Tata Nexon EV.

The electric car market remains very small in India currently, but will have to expand rapidly to meet with stricter emissions. 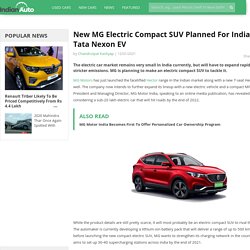 MG is planning to make an electric compact SUV to tackle it. MG Motors has just launched the facelifted Hector range in the Indian market along with a new 7-seat Hector Plus variant as well. The company now intends to further expand its lineup with a new electric vehicle and a compact MPV. Rajeev Chaba, President and Managing Director, MG Motor India, speaking to an online media publication, has revealed that the company is considering a sub-20 lakh electric car that will hit roads by the end of 2022. While the product details are still pretty scarce, it will most probably be an electric compact SUV to rival the Tata Nexon EV. 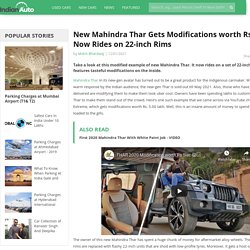 It now rides on a set of 22-inch rims and features tasteful modifications on the inside. Mahindra Thar in its new-gen avatar has turned out to be a great product for the indigenous carmaker. Welcomed with a warm response by the Indian audience, the new-gen Thar is sold-out till May 2021. Also, those who have got their cars delivered are modifying them to make them look uber cool. Owners have been spending lakhs to customize their new-gen Thar to make them stand out of the crowd. The owner of this new Mahindra Thar has spent a huge chunk of money for aftermarket alloy wheels. Its interior now dons a brown theme with custom finished door panels, quilted roof liners, custom seat covers and more. 2021 Tata Safari Imagined with Off-road Essentials to Become Expedition-ready. Tata Safari is finally making a comeback in the form of Tata Gravitas. 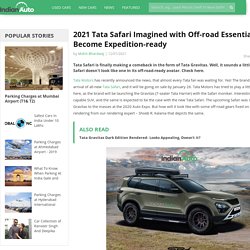 Well, it sounds a little quirky, but the Safari doesn't look like one in its off-road-ready avatar. Check here. Tata Motors has recently announced the news, that almost every Tata fan was waiting for. Kia Motors India Gets Really Close to Tata Motors Last Month. Kia has a very successful beginning in the Indian market. 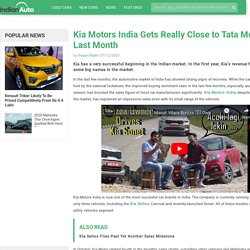 In the first year, Kia's revenue has surpassed some big names in the market. In the last few months, the automotive market of India has showed strong signs of recovery. While the car market was severely hurt by the national lockdown, the improved buying sentiment seen in the last few months, especially around the festive season, has boosted the sales figure of most car manufacturers significantly. Upcoming Tata Tiago NRG Facelift Spied Testing.

Upcoming Tata Tiago NRG has been spied while getting tested. 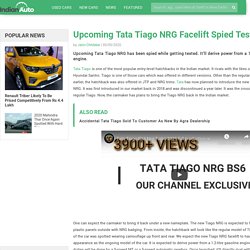 It’ll derive power from a 1.2-litre petrol engine. Tata Tiago is one of the most popular entry-level hatchbacks in the Indian market. It rivals with the likes of Maruti WagonR and Hyundai Santro. Tiago is one of those cars which was offered in different versions. New Look Toyota Innova Crysta Reaches Dealerships, Prices to be Out VERY SOON. The new Toyota Innova Crysta facelift has started reaching dealerships ahead of its price announcement set to happen today. Here are the latest details on the new MPV. The Toyota Innova Crysta, one of the most popular MPVs in the Indian car market, is all set to receive an update very soon. Right before the launch of the Innova Crysta facelift, the MPV has been spotted completely without any camouflage at the dealership stockyards. All-new Hyundai i20 Launched, Full Details - VIDEO. All-new Hyundai i20 finally goes on sale in the country today.

The prices start at Rs. 6.79 lakh and the variant line-up starts from the Magna trim. Read the complete report here. Hyundai has launched the new-gen i20 in the country at a starting price of Rs. 6.79 Lakh. Maruti Suzuki Sells Over 340 Vitara Brezza a Day Since 2016. Maruti Vitara Brezza has achieved 5.5 lakh sales mark. It was first launched back in 2016 and has been selling in great numbers ever since India’s biggest carmaker Maruti Suzuki has recently reported that Vitara Brezza has crossed 5.5 lakh of sales mark within a short time span of 4.5 years. It is the fastest-growing model in its segment to achieve this milestone. Tata Nexon Ditches Tri-arrow Pattern for Bi-arrow Design. Tata Nexon has witnessed a replacement of the regular tri-arrow grille with bi-arrow design. However, this grille will be only available on higher variants Earlier this year, Tata Motor has launched the facelift Tata Nexon.

The new model comes with some significant exterior updates. However, recently, it is reported that Tata Motor will include a small design update for the existing Nexon model. Hyundai Verna’s Prices Increase By Up To Rs 18,000 This Month. Hyundai has recently added a new base variant to the range of the Hyundai Verna. The prices of other variants are also revised. The new prices are higher than the previous prices by Rs 9,000 to Rs 18,000.

MG Hector Gets Dual-tone Look, Dual Delight Launched. MG Hector Dual Delight has been launched in India at Rs 16.84 lakh that is Rs 20,000 pricier than the equivalent monotone variant. Check out the latest details on MG Hector Dual Delight design, features, prices and more. After the introduction of MG Hector Special Anniversary Edition a while ago, MG Motor launches the latest Hector Dual Delight variant in India. All-new Hyundai i20 To Enter Indian Market in November. 2020 Hyundai i20 is scheduled to launch this November. 34 Units of 2020 Mahindra Thar Booked Every Hour. Mahindra Thar has received over 15,000 bookings ever since its launch. Honda Amaze, WR-V Exclusive Editions Launched In India. More than 3 Maruti WagonR CNG Models Sold Every Hour!