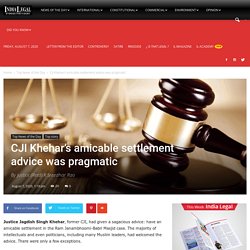 The majority of intellectuals and even politicians, including many Muslim leaders, had welcomed the advice. There were only a few exceptions. Supreme Court asks Centre if there is a possibility of 4G internet restoration in some parts of J&K - India Legal. The bench said that it will decide whether there is contempt or not after hearing from the Centre New Delhi: The Supreme Court today directed Solicitor General Tushar Mehta to seek instructions from the Centre on the possibility of opening 4G internet services in some parts of the Union Territory of Jammu and Kashmir. 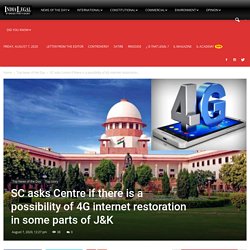 The bench, comprising Justices NV Ramana, BR Gavai and Subhash R Reddy, was hearing a contempt petition filed by Foundation of Media Professionals, seeking immediate restoration of 4G in the UT of Jammu and Kashmir. Constitutional lessons from the Rajasthan political crisis - India Legal. The Governor should have called for a floor test or an Assembly session a long time back The 10th schedule of the Constitution deals with the disqualification on grounds of defection. 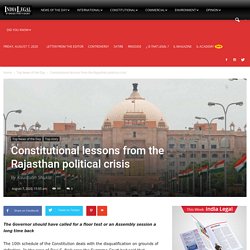 In the case of Ravi S. Naik case the Supreme Court had said that voluntarily giving up membership of a political party may be express or implied by conduct. The political turmoil in Rajasthan brings a proposition to ponder, as to whether the court can interfere with the power of the Speaker, even before the Speaker has made any decision on defection. If we are considering a situation where the Speaker has taken a decision, we must then understand Clauses 6 & 7 of 10th schedule, read with Article 212.

Activist Rehana Fathima’s advance plea dismissed by SC - India Legal. New Delhi: The Supreme Court today dismissed the anticipatory bail plea by Kerala activist Rehana Fathima in a case in which she has been hauled up for making her minor children paint her half nude body and then uploading that video online. 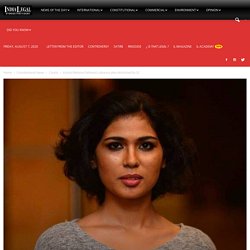 A three-judge bench of Justices Arun Mishra, BR Gavai and Krishna Murari noted that the act was obscene and would prima facie fall under child pornography. During the hearing, the bench noted that this clearly was obscenity and the petitioner tried to spread it, which could leave the society with a very bad taste. “Why do you do all this? You might be an activist, but why do this? 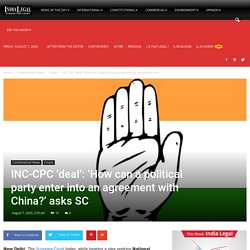 The bench, comprising Chief justice SA Bobde and Justices AS Bopanna and V Ramasubramanian, was hearing a petition filed by advocate Shashank Shekhar Jha and journalist Savio Rodrigues, seeking investigation under Unlawful Activities Prevention Act by the NIA into a 2008 agreement signed between the Indian National Congress (INC) and the Communist Party of China in Beijing for exchanging high-level information and co-operation between them. Supreme Court sets aside conviction, says it cannot be based on conjectures - India Legal. Conviction could not be based on a foundation of conjectures and surmises to conclude guilt of the accused without establishing it beyond reasonable doubt, Supreme Court The Supreme Court has set aside an individual’s conviction under the Narcotics Drugs and Psychotropic Substances Act while stating that the police investigation extremely casual, perfunctory and shoddy in nature. 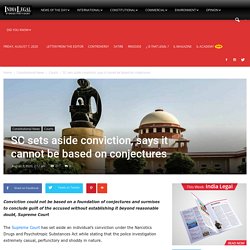 A Division Bench of Justice RF Nariman and Justice Navin Sinha observed that the appellant was denied the right to a fair investigation, which is but a facet of a fair trial guaranteed to every accused under Article 21 of the Constitution, which resulted in the appellant having to suffer incarceration for an offence he had never committed. An appeal was filed challenging conviction under relevant sections of the Narcotics Drugs and Psychotropic Substances Act, 1985 for recovery of 48 Kgs 200 gms. cannabis (ganja), and sentence of 10 years of rigorous imprisonment with a default stipulation. Rhea Chakraborty reaches ED office - India Legal. Mumbai: When deceased actor Sushant Singh Rajput’s girlfriend Rhea Chakraborty reached the office of the ED in Mumbai this morning, her lawyer said: “Rhea Chakraborty is a law abiding citizen. 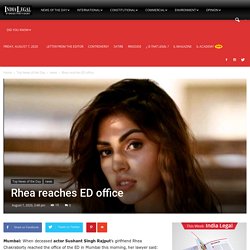 In view of the fact that the ED has informed the media that the request to postpone the attendance is rejected, she has appeared in the ED at the appointed time and date.” She was wearing a blue and white salwar suit and a scarf. Petition in SC seeking initiation of suo motu contempt against AIMPLB - India Legal. New Delhi: A letter petition, addressed to Chief Justice SA Bobde, seeks initiation of a suo motu contempt petition against All India Muslim Personal Law Board (AIMPLB) in connection with a tweet which allegedly lowered the dignity of the Supreme Court. 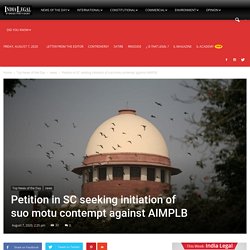 The letter has been written by advocate Vinay Vats, over a tweet published by AIMPLB on its official twitter handle dated August 4. It reads: “#Babri Masjid was and will always be a Masjid. #HagiaSophia is a great example for us. Usurpation of the land by an unjust, oppressive, shameful and majority appeasing judgment can’t change its status. No need to be heartbroken. Bihar Police IPS officer released from BMC’s ‘forced quarantine’ - India Legal.

New Delhi: The Habeas Corpus petition in the Supreme Court to release Bihar IPS officer Vinay Tiwari from forced quarantine in Mumbai seems to have paid off. 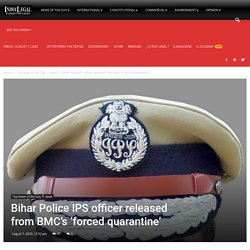 He was released from quarantine, today and asked to return to Patna by tomorrow. Foreigners facing trial in Tablighi case may leave during pendency of case, says govt in SC - India Legal. New Delhi: The Supreme Court was today informed that foreigners facing trial for attending the Tablighi Jamaat activities in Delhi may leave the country during the pendency of the cases. 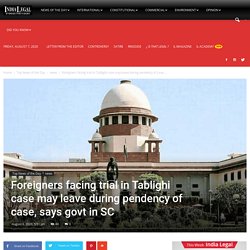 A three-judge bench of Justices AM Khanwilkar, Dinesh Maheshwari and Sanjiv Khanna was hearing a plea filed by 34 foreign nationals challenging the decision of the Ministry of Home Affairs (MHA) to blacklist over 3,000 of them from travelling to India for a period of 10 years. The Bureau of Immigration under the MHA had blacklisted these individuals under Category A. According to Solicitor General Tushar Mehta, most of these people are facing criminal charges and blacklisting an individual was a sovereign plenary function. According to the Central government these people violated the Visa Manual 2019 by taking part in Tablighi Jamaat activities and also committed an offence punishable the Foreigners Act, 1946. Read Also: China’s attempt to bring up J&K at UNSC makes no headway. China’s attempt to bring up J&K at UNSC makes no headway - India Legal. New Delhi: The Ministry of External Affairs (MEA) today issued a statement saying that yet another attempt by China, trying to meddle in “India’s internal matter” and trying to bring it up at the United Nations Security Council (UNSC) has met with “little support from the international community”.

The statement said that India rejected China’s attempt to discuss the issue of Jammu and Kashmir in the UNSC. The ministry noted that while China initiated a discussion in the UNSC on issues pertaining to the Indian Union Territory of Jammu & Kashmir, it’s not the first time that China has attempted to raise a subject that is India’s internal matter. Like previous instances, this attempt too met only with a little support from the international community, said the statement from the MEA. The statement says that the government, therefore, rejected China’s interference in India’s internal affairs and urges it to draw proper conclusions from such infructuous attempts. Grassroots Empowerment. The online audit of gram panchayats for the first time is expected to ensure transparency.

But for its complete success, high speed and uninterrupted connectivity are a must. By Devender Singh Aswal Sweet are the uses of adversity Which, like the toad, ugly and venomous, Wears yet a precious jewel in his head; And this our life, exempt from public haunt, Finds tongues in trees, books in the running brooks, Sermons in stones, and good in everything. —As You Like It. Online classes: Gujarat High Court sets aside govt order for tuition fees of pvt schools’ - India Legal. New Delhi: The Gujarat High Court has set aside certain clauses of a government order that restrained private, unaided schools from collecting tuition fees until they reopened, according to information reaching here. A division bench of Chief Justice Vikram Nath and Justice JB Pardiwala heard the petition filed by an association of unaided schools and set aside the following clauses: · Clause stating that no fees to be charged by any unaided schools either towards the tuition fees or in relation to any optional activity as long as online classes are being held. · Clause stating that the expenditure incurred in the salary of teaching and non teaching staff of the Schools to be considered while determining the fees for the next year. · Clause stating that fees already paid, to be adjusted against the fees which would become payable upon physical opening of schools.

While Oza, president of the GHCAA, today said he was willing to apologise again, in front of the full court, Justice Kaul pointed out that the bench did not agree with the kind of imputations Oza had made. The judge also said: “Grievances people can have – but to say that only certain category of matters are being listed, to make imputations that certain other matters are being listed and not the rest — is not correct. Registry is working very hard indeed.”

Allahabad High Court warns state govt of strict action if Corona guidelines are not followed - India Legal. New Delhi: The Allahabad High Court has warned the state government of stern action if it did not strictly follow the rules pertaining to COVID management as set out by the court. The court was reacting to a complaint of negligence in following the guidelines of the central and state governments regarding the Coronavirus. The court said that the slogan ‘Two yards away, mask is necessary’ is not being followed. People have misinterpreted the unlock procedure and are roaming freely. A division bench of Justices Siddharth Verma and Ajit Kumar, hearing the public interest litigation on the plight of quarantine centers and better treatment facilities in hospitals, expressed dissatisfaction with the government’s measures regarding Corona. Supreme Court stays Allahabad High Court order restraining police from arresting govt counsel accused of rape - India Legal.

Banking Sector: Discordant Notes. Strength of a nation lies in Science,Technology and civilisational Ethos - India Legal. Lord Shri RAM is a unifier. Top Legal Opinion by Experts, Opinion & Analysis of Legal Matters - IndialegalLive. Environmental Law & Regulation News, Environment News & Articles - IndialegalLive. The Big Fuss at Times Square. By Kenneth Tiven Times Square on this Wednesday morning in New York City looks pretty much as it has since early March when the pandemic caused New York to lockdown. Since then, this iconic location has been without tourists or theatergoers. Broadway Shows are closed for the remainder of the year putting some 2,50,000 workers, from actors to theatre ushers, on unemployment. Delhi High Court heard petitioners in length, will now hear Delhi Police on August 14: Delhi Riots- Jamia Millia Islamia - India Legal.