A Farmer. A sailor of dreams, a harpooner of reality. 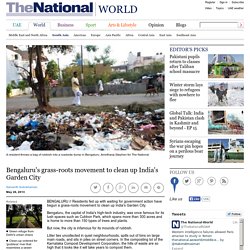 Bengaluru, the capital of India's high-tech industry, was once famous for its lush spaces such as Cubbon Park, which spans more than 300 acres and is home to more than 150 types of trees and plants. But now, the city is infamous for its mounds of rubbish. Litter lies uncollected in quiet neighbourhoods, spills out of bins on large main roads, and sits in piles on street corners. In the composting lot of the Karnataka Compost Development Corporation, the hills of waste are so high that it looks like it will take years to compost them. Rubbish is a blight across India. In Bengaluru, residents have banded together to come up with immediate solutions - including hiring private contractors even though they pay tax to have the rubbish removed - as well as working on bigger ideas. HC gets tough with slaughterhouse pollution. Government rejects parliamentary committee's call to ban food waste from landfill. KSPCB Nod for Waste Management Unit.

BANGALORE: The Karnataka State Pollution Control Board (KSPCB) has given conditional approval to Bruhat Bangalore Mahanagara Palike (BBMP) for setting up of a municipal solid waste (MSW) plant at Lingadheeranhalli, Banashankari 6th Stage. 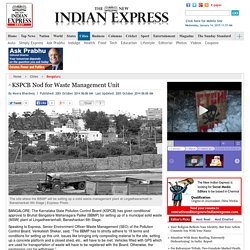 Speaking to Express, Senior Environment Officer-Waste Management (SEO) of the Pollution Control Board, Venkatesh Shekar, said, “The BBMP has to strictly adhere to 19 terms and conditions for setting up this unit. Issues like bringing only composting material to the site, setting up a concrete platform and a closed shed, etc., will have to be met. Vehicles fitted with GPS which are used for transportation of waste will have to be registered with the Board. Otherwise, the permission can be withdrawn.” On September 2, the regional officer of the KSPCB had recommended that the Lingadheeranhalli site was unsuitable for establishment of a MSW processing plant.

Karnataka HC restrains BBMP and others from constructing waste management facility on a private land. 'Soudhas, High Court should set example on waste management' Mayor Lays Stress on Waste Segregation at Source. BENGALURU: Mayor Shanthakumari on Thursday said the city would become free of garbage in the next three to four months provided citizens segregate waste at source. 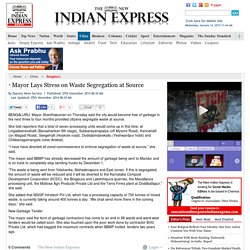 She told reporters that a total of seven processing units would come up in this time, at Lingadeeranahalli (Banashankari 6th stage), Subbarayanapalya (off Mysore Road), Kannahalli (on Magadi Road), Seegehalli (Hoskote road), Doddabindarekallu (Yeshwantpur hobli) and Chikkanagamangala (near Anekal). “I have have directed all zonal commissioners to enforce segregation of waste at source,” she said. The mayor said BBMP has already decreased the amount of garbage being sent to Mandur and is on track to completely stop sending trucks by December 1.

“The waste is being sent from Yelahanka, Mahadevapura and East zones. The Kitchen Gardener: Priya Anand and her pest friends. “I don’t use any pesticide, I just let nature do the job: pests in my garden are removed by natural predators like birds and other insects, turning my garden into a self-propelled natural ecosystem.” 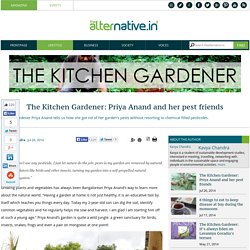 Growing plants and vegetables has always been Bangalorean Priya Anand’s way to learn more about the natural world. “Having a garden at home is not just healthy, it is an educative tool by itself which teaches you things every day. Today my 2-year-old son can dig the soil, identify common vegetables and he regularly helps me sow and harvest. I am glad I am starting him off at such a young age.” Pesticide on your plate. Vegetables are the noble folk of food world, loved equally by doctors and grandmothers. 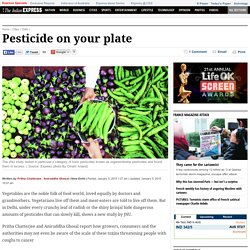 Vegetarians live off them and meat-eaters are told to live off them. But in Delhi, under every crunchy leaf of radish or the shiny brinjal hide dangerous amounts of pesticides that can slowly kill, shows a new study by JNU. Pritha Chatterjee and Aniruddha Ghosal report how growers, consumers and the authorities may not even be aware of the scale of these toxins threatening people with coughs to cancer When you eat your leafy greens and those elegant bhindis, you are doing yourself and the earth a world of good.

Universally accepted as repositories of vitamins and minerals crucial to keeping good health, vegetables also help us do our bit for the environment and turn us into animal rights champions by default. 450 tonnes of mixed waste gets processed in this plant every day. Workers in hats and boots stand beside a big machine, while a few stand in a corner sipping hot tea. 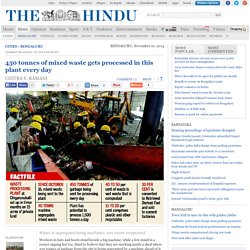 Hard to believe that they are working inside a shed where 450 tonnes of garbage from the city is being segregated by a machine ahead of it being processing. For the past 20 days, each day 450 tonnes of garbage has been sent to the waste processing plant at Chigaranahalli in Doddaballapur taluk. MSGP Infratech Pvt. Ltd. established the plant on 15 acres of land. Garbage: notices to 15,000 bulk generators. Around 15,000 bulk generators, including hotels, apartments and business establishments who have failed to process the waste they generate, have been identified and the BBMP has issued notices to them, stated Mayor N. 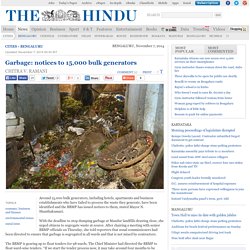 Shanthakumari. With the deadline to stop dumping garbage at Mandur landfills drawing close, she urged citizens to segregate waste at source. After chairing a meeting with senior BBMP officials on Thursday, she told reporters that zonal commissioners had been directed to ensure that garbage is segregated in all wards and that is not mixed by contractors. The BBMP is gearing up to float tenders for 98 wards. The Chief Minister had directed the BBMP to float ward-wise tenders. Dry waste collection sabotaged. Drains, the new dumping ground.

This could intensify after December 1, as an easy way to get rid of garbage is by dumping them in SWDs and vacant plots, worry solid waste management officials of the BBMP. 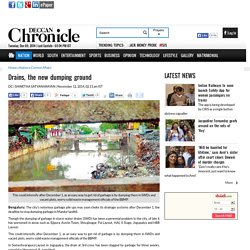 Bengaluru: The city’s notorious garbage pile ups may soon choke its drainage systems after December 1, the deadline to stop dumping garbage in Mandur landfill. Though the dumping of garbage in storm water drains (SWD) has been a perennial problem in the city, of late it has worsened in areas such as Ejipura, Austin Town, Shivajinagar, Pai Layout, HAL II Stage, Jogupalya and HBR Layout. In Someshvarapura Layout in Jogupalya, the drain at 3rd cross has been clogged by garbage for three weeks, complains Venugopal. Have you seen a biogas plant in your neighbourhood?: News Desk - Citizen Matters, Bangalore News. Here is BBMP's list of biomethanisation plants across Bengaluru. 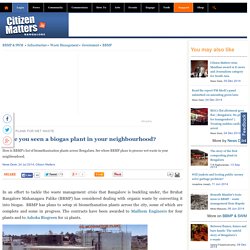 See where BBMP plans to process wet waste in your neighbourhood. In an effort to tackle the waste management crisis that Bangalore is buckling under, the Bruhat Bangalore Mahanagara Palike (BBMP) has considered dealing with organic waste by converting it into biogas. BBMP has plans to setup 16 biomethanation plants across the city, some of which are complete and some in progress. The contracts have been awarded to Mailhem Engineers for four plants and to Ashoka Biogreen for 12 plants. Illustrative picture of Bio-methanation plant. On 22-Jun-2014, the biomethanation plant at KR Market was inaugurated. BBMP filed the following submission in Writ Petition 24739.2012, Kavitha Shankar vs. Share your observations related to your neighbourhood, in the Comments thread below -- where the plant is, if you have seen it functioning etc.

Click on the preview to view the map of biomethanisation plants.