Here’s What the U.S. Has to Do to Deal With the Mad Middle East. Glenn Greenwald described Laura Poitras as “Keyser Soze,” someone “at once completely invisible and yet ubiquitous,” while James Clapper, the Director of National Intelligence, branded her and Greenwald “accomplices” to espionage at a Senate hearing in January. 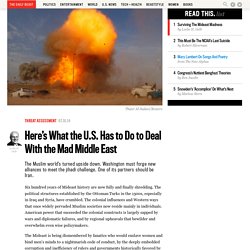 She’s been on the Department of Homeland Security’s watch list since 2006, and is regularly harassed and interrogated by border agents. Now we’re huddled together in the back of a coffee shop in Tribeca. I had chosen a seat by the window, but Poitras vetoed the location. Despite her apparent sense of paranoia, she’s placed her CryptoPhone out on the table and is showing me the ins and outs. “It was purchased by First Look, so I don’t know the cost of it,” says Poitras. Poitras is perhaps the person most responsible for bringing Edward Snowden’s NSA leaks to the front pages of newspapers, and the story of her first meeting with the whistleblower reads like a le Carré novel.

You’ve got the full Snowden archives. [Laughs] Henry Kissinger on the Assembly of a New World Order - WSJ. Japan, China seek to hold summit at APEC in November: media. A Time of Unprecedented Instability? The following is an edited exchange of emails between Michael Oren, former Israeli ambassador to the United States, and David Rothkopf, CEO and editor of the FP Group, the publisher of Foreign Policy magazine and ForeignPolicy.com. 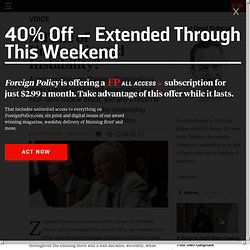 The first of the emails came after Oren asked Rothkopf how he felt about a trip to Israel he made in late 2013, the first time he had visited the country. Longtime friends, Oren and Rothkopf were roommates and classmates at Columbia University in New York City. The question, while simple enough, ignited a discourse on the United States, Israel, American Jews, Israeli Jews, and the state of the relationship as seen from two different perspectives -- that of two men who started out with similar backgrounds and views and who, over time, reached some strikingly different conclusions on one subject important to them both. Michael, You asked me a pretty simple, straightforward question in your email that has beencareening around my brain like a stray pinball. Can the US tone down to ASEAN’s tune? Author: Andrew Chubb, UWA This month’s Sino–Vietnamese confrontation in the South China Sea, which began when China unilaterally sent a large oil drilling platform to disputed waters 220 kilometres from the Vietnamese coast, raises the question of how to deter unilateral provocations in maritime East Asia. 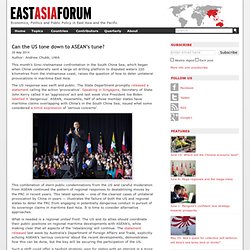 The US response was swift and public. The State Department promptly released a statement calling the action ‘provocative’. Speaking in Singapore, Secretary of State John Kerry called it an ‘aggressive’ act and last week Vice President Joe Biden labelled it ‘dangerous’. ASEAN, meanwhile, half of whose member states have maritime claims overlapping with China’s in the South China Sea, issued what some considered a timid expression of ‘serious concerns’.

This combination of stern public condemnations from the US and careful moderation from ASEAN continued the pattern of regional responses to destabilising moves by the PRC in recent years. What is needed is a regional united front. Richard N. Haass: Obama’s Unclear Foreign Policy Path. President Barack Obama has laid out a vision for U.S. foreign policy calling for the need to avoid both unnecessary military entanglements and isolationism. 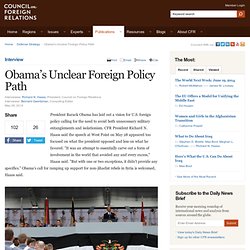 CFR President Richard N. Haass said the speech at West Point on May 28 appeared too focused on what the president opposed and less on what he favored. "It was an attempt to essentially carve out a form of involvement in the world that avoided any and every excess," Haass said. "But with one or two exceptions, it didn't provide any specifics. " Obama's call for ramping up support for non-jihadist rebels in Syria is welcomed, Haass said. U.S. president Barack Obama speaks at the commencement ceremony at the United States Military Academy at West Point, New York, May 28, 2014. What did you think of President Obama's major foreign policy speech to West Point graduates today? It seemed to be a speech that didn't so much lay out a clear path of what he favored so much as what he opposed. That's correct. Some of that is probably inevitable.

A Disparity Impossible to Ignore. Hammered from the right and the left, U.S. 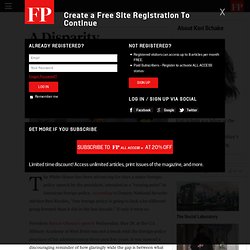 President Barack Obama's foreign policy has begun to acquire quite a negative brand and reputation, however unfair that may appear to his acolytes and supporters. Bereft of vision, weak and directionless, some critics charge, the president has abdicated responsibility -- both moral and strategic. Others say that, at a minimum, he has corrected course too strongly in the wake of Afghanistan and Iraq and has emerged as a risk-averse president in a world that cries out for risk readiness and American leadership. The president's predicament is made worse because he raised expectations early and often, allowing his rhetoric to go well beyond his capacity. There was the Cairo speech in 2009, with its uplifting rhetoric about how U.S. policy toward the Middle East was going to be fundamentally different. Unlike good scotch and wine, this poor image of Obama's foreign policy may not improve with time.