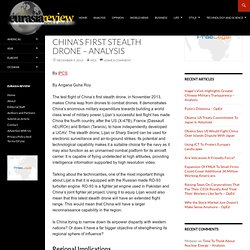 It demonstrates China’s enormous military expenditure towards building a world class level of military power. Lijian’s successful test flight has made China the fourth country, after the US (X-47B), France (Dassault nEUROn) and Britain (Taranis), to have independently developed a UCAV. The stealth drone, Lijan or Sharp Sword can be used for electronic surveillance and air-to-ground strikes.

Talking about the technicalities, one of the most important things about Lijat is that it is equipped with the Russian made RD-93 turbofan engine. Is China trying to narrow down its airpower disparity with western nations? Regional Implications Lijan’s test flight is important in the light of the intensifying island dispute between Beijing and Tokyo in East China Sea.

Weeks after this, China came up with the multi-capacity Lijan. 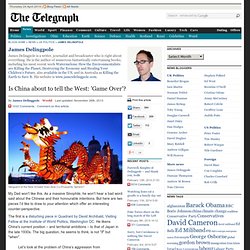 My Dad won't like this. As a massive Sinophile, he won't hear a bad word said about the Chinese and their honourable intentions. But here are two pieces I'd like to draw to your attention which offer an interesting counter-perspective. The first is a disturbing piece in Quadrant by David Archibald, Visiting Fellow at the Institute of World Politics, Washington DC. He likens China's current position – and territorial ambitions – to that of Japan in the late 1930s. Let’s look at the problem of China’s aggression from China’s perspective. It gets worse: With its fuel needs accounted for, China’s next decision is whether or not to pre-emptively attack US bases in the Western Pacific as part of its attack on Japan and the Philippines.

This dread moment may be closer than we think: A further indication of Chinese timing is the tone of rhetoric being used by China in describing what it will do. You're welcome to disagree. US Political, Financial & Business News. The Most Dangerous Continent. Some problems travel well. 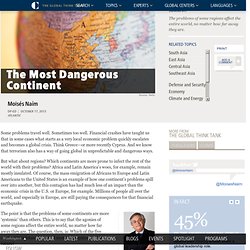 Sometimes too well. Financial crashes have taught us that in some cases what starts as a very local economic problem quickly escalates and becomes a global crisis. Think Greece—or more recently Cyprus. And we know that terrorism also has a way of going global in unpredictable and dangerous ways. But what about regions? The point is that the problems of some continents are more ‘systemic’ than others. One way to answer is to think about which threats travel the easiest and with no trouble skirt borders, fortifications, or the public policies that we naïvely believe protect us. Nor may we be able to dodge the consequences of the nuclear experiments of a young, inexperienced North Korean tyrant. But the problems that originate in Asia will prove more and more complicated, as their already gigantic economies continue to grow, albeit at a slower pace than in the last several decades. 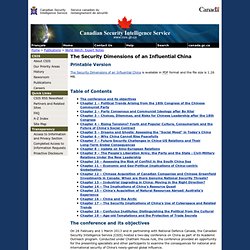 Table of Contents The conference and its objectives On 28 February and 1 March 2013 and in partnership with National Defence Canada, the Canadian Security Intelligence Service (CSIS) hosted a two-day conference on China as part of its Academic Outreach program. Conducted under Chatham House rule, the conference provided an opportunity for the presenting specialists and other participants to examine the consequences for national and international security of China's newly-gained global influence. The papers contained in this conference report reflect the views of the independent scholars and analysts who presented them, not those of CSIS. The China conference welcomed an impressive roster of researchers from Canada, Europe, Asia and the United States.

Political Trends Arising from the 18th Congress of the Chinese Communist Party Xi, however, is not Mao.