Cyber. Military. Overview. Outlook on the Global Agenda 2015. In the years following the Cold War, the prevailing view was that the world had moved towards a liberal, democratic consensus. 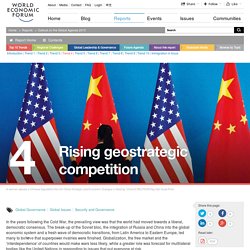 The break-up of the Soviet bloc, the integration of Russia and China into the global economic system and a fresh wave of democratic transitions, from Latin America to Eastern Europe, led many to believe that superpower rivalries were finished. Globalization, the free market and the ‘interdependence’ of countries would make wars less likely, while a greater role was forecast for multilateral bodies like the United Nations in responding to issues that put everyone at risk. This did not relieve us of security concerns, but from the 1990s onward, the so-called new challenges were regarded as asymmetric.

Rather than fearing strong, opposing states, we worried about state weakness, the breakup of countries, or the global reach of non-state, terrorist networks. Geopolitics – and realpolitik – is once again taking centre stage. Source: Survey on the Global Agenda 2014.

Paradiplomacy: A New Way for Indian Foreign Policy? Narendra Modi calls for a greater role for the states in India’s economic diplomacy. 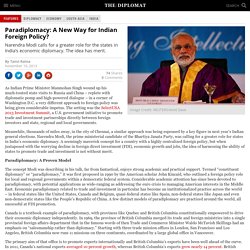 The idea has merit. By Tanvi Ratna for The Diplomat November 10, 2013 Facebook55 Twitter18 Google+0 LinkedIn1 As Indian Prime Minister Manmohan Singh wound up his much-touted state visits to Russia and China – replete with diplomatic pomp and high-powered dialogue – in a corner of Washington D.C. a very different approach to foreign policy was being given considerable impetus. Meanwhile, thousands of miles away, in the city of Chennai, a similar approach was being espoused by a key figure in next year’s Indian general elections. Paradiplomacy: A Proven Model The concept Modi was describing in his talk, far from fantastical, enjoys strong academic and practical support. 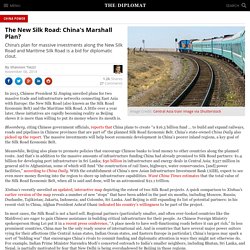 In 2013, Chinese President Xi Jinping unveiled plans for two massive trade and infrastructure networks connecting East Asia with Europe: the New Silk Road (also known as the Silk Road Economic Belt) and the Maritime Silk Road. A little over a year later, these initiatives are rapidly becoming reality as Beijing shows it is more than willing to put its money where its mouth is. Bloomberg, citing Chinese government officials, reports that China plans to create “a $16.3 billion fund … to build and expand railways, roads and pipelines in Chinese provinces that are part of” the planned Silk Road Economic Belt. China’s state-owned China Daily also picked up the report.

The Bay of Bengal: The Maritime Silk Route and China’s Naval Ambitions. 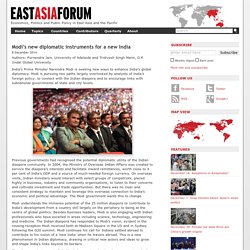 Jindal Global University India’s Prime Minister Narendra Modi is seeking new ways to enhance India’s global diplomacy. Modi is pursuing two paths largely overlooked by analysts of India’s foreign policy: to connect with the Indian diaspora and to encourage links with subnational governments at state and city levels. Global Trends 2030. Global Trends 2030 is intended to stimulate thinking about the rapid and vast geopolitical changes characterizing the world today and possible global trajectories over the next 15 years. 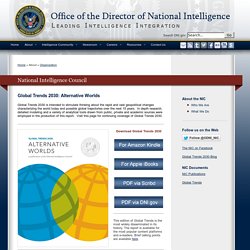 In depth research, detailed modeling and a variety of analytical tools drawn from public, private and academic sources were employed in the production of this report. Visit this page for continuing coverage of Global Trends 2030. Download Global Trends 2030. Edward John: Why BC’s First Nations Need a China Strategy.

Regional Institutions References. Population by Ethnic Origin by Province. A Middling Power: Why Australia's defence is all at sea: In trying to explain the purpose of our armed forces, defence ministers often fall back on that plangent phrase “the defence of Australia”. 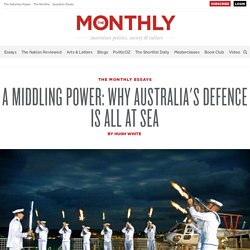 In a recent speech to the Australian Strategic Policy Institute (ASPI), Defence Minister Stephen Smith reminded his audience that the 2009 Defence White Paper “underlined that Australia’s most basic strategic interest remained the defence of Australia against direct armed attack”. He then foreshadowed that the next White Paper, promised some time next year, would come to the same conclusion. This appealingly simple idea, that the reason we have a defence force is to defend ourselves against direct attack, has been central to defence policy for at least the past 40 years, and the public seems to accept it.

But few people in government or Defence think that Australia faces any credible risk of major military attack, and fewer still believe we could defend ourselves if we did. Headmark - A middling power: What is the ADF meant to do, exactly? (Humanities & Social Sciences Collection) - Informit. Is Canadian support for engagement with Asia declining? - GLOBE-Net. Vancouver, BC – June 10, 2014 – According to the 2014 National Opinion Poll (NOP) of Canadian Views on Asia released today by the Asia Pacific Foundation of Canada (APF Canada), Canadian support for engagement with Asia is declining, despite increased trade and investment with the region. 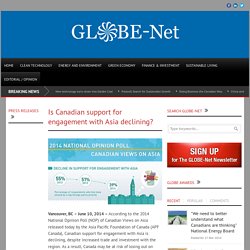 As a result, Canada may be at risk of losing out on opportunities in Asia that other western industrialized countries are actively pursuing.