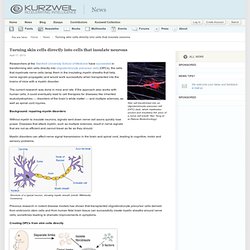 /Nature Biotechnology) Researchers at the Stanford University School of Medicine have succeeded in transforming skin cells directly into oligodendrocyte precursor cells (OPCs), the cells that myelinate nerve cells (wrap them in the insulating myelin sheaths that help nerve signals propagate) and would work successfully when transplanted into the brains of mice with a myelin disorder. The current research was done in mice and rats. If the approach also works with human cells, it could eventually lead to cell therapies for diseases like inherited leukodystrophies — disorders of the brain’s white matter — and multiple sclerosis, as well as spinal cord injuries. Background: repairing myelin disorders Without myelin to insulate neurons, signals sent down nerve cell axons quickly lose power. Creating OPCs from skin cells directly.

Why ‘neuroskeptics’ see an epidemic of brain baloney. Earlier this month, Barack Obama unveiled a grand, new U.S. government initiative called BRAIN (Brain Research through Advancing Innovative Neurotechnologies) that he said would provide “a dynamic picture of the brain in action” and help humanity “better understand how we think and how we learn and how we remember.” 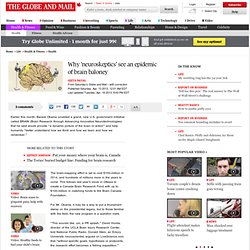 The brain-mapping effort is set to cost $100-million in 2014, and hundreds of millions more in the years to come. This follows last year’s move in Ottawa to create a Canada Brain Research Fund with up to $100-million in matching funds to the Brain Canada Foundation. For Mr. How the BRAIN intiative will support national security. Obama to Unveil Initiative to Map the Human Brain. A senior administration scientist compared the new initiative to the Human Genome Project, in that it is directed at a problem that has seemed insoluble up to now: the recording and mapping of brain circuits in action in an effort to “show how millions of brain cells interact.” 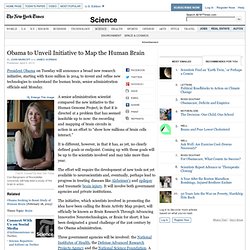 It is different, however, in that it has, as yet, no clearly defined goals or endpoint. Coming up with those goals will be up to the scientists involved and may take more than year. The effort will require the development of new tools not yet available to neuroscientists and, eventually, perhaps lead to progress in treating diseases like and and traumatic . It will involve both government agencies and private institutions. Three government agencies will be involved: the , the and the . The initiative exists as part of a vast landscape of neuroscience research supported by billions of dollars in federal money. “The goal here is a whole new playing field, whole new ways of thinking,” he said.

Science & Environment - Ten extraordinary Pentagon mind experiments. The Pentagon's growing interest in the brain for everything from mind-controlled vehicles to advanced prosthetics. 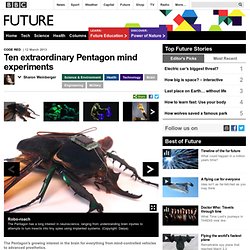 It’s been 30 years since the first message was sent over initial nodes of the Arpanet, the Pentagon-sponsored precursor to the internet. But this month, researchers announced something that could be equally historic: the passing of messages between two rat brains, the first step toward what they call the “brain net”. Connecting the brains of two rats through implanted electrodes, scientists at Duke University demonstrated that in response to a visual cue, the trained response of one rat, called an encoder, could be mimicked without a visual cue in a second rat, called the decoder.

The 12 cognitive biases that prevent you from being rational. The Baby Lab. On weekday mornings at nine o’clock, at Harvard University’s Laboratory for Developmental Studies, the babies start arriving in a long procession, looking like young pashas in their luxurious, oversized strollers. 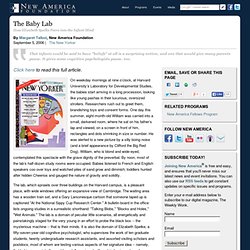 Researchers rush out to greet them, brandishing toys and consent forms. One day this summer, eight-month-old William was carried into a small, darkened room, where he sat on his father’s lap and viewed, on a screen in front of him, rectangles and dots shrinking in size or number. Neuroscience News, Videos, Reviews and Gossip - io9. Scientific evidence that you probably don’t have free will. I might note that you're citing experiments, which while not entirely debunked are in many circles considered to be highly flawed. 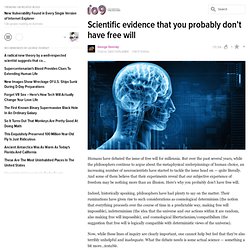 For example, the "when did you decide to move your finger," experiment. This experiment is considered flawed because moving your finger is purely a motor response, and an incredibly simplistic one at that. The motion of our hands is one of the things we have the least control over, we're constantly twitching, scratching itches, or simply stretching our fingers out without realizing it.

Simply put, moving your fingers is such a small and inconsequential decision that it largely falls under the unconscious decision category. This however, is entirely different from decisions that by necessity require a great deal of forethought. Re-Wiring the Brain: The Science of Nexus. Secrets of a Mind-Gamer. Why Cognitive Enhancement Is in Your Future (and Your Past) - Ross Andersen. Using technology to enhance our brains sounds terrifying, but using tools to make ourselves smarter may be part of humans' nature. 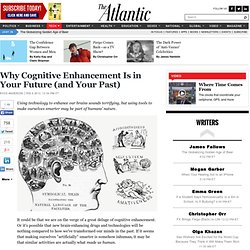