The cubicle deconstructed: Simple visual enclosure improves perseverance. Corporate Culture Matters, a lot! And now you can measure it. According to Harvard Business Review, the benefits of a strong corporate culture are both intuitive and supported by social science. 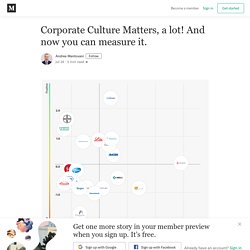 And according to James L. Heskett, culture “can account for 20–30% of the differential in corporate performance when compared with ‘culturally unremarkable’ competitors.” The same HBR magazine has identified 6 key elements that help building a differentiated culture and a lasting organization. 1. Vision & Mission: A great culture starts with a vision and a mission statement. A Mission Statement defines the company’s business, its objectives and its approach to reach those objectives.A Vision Statement describes the desired future position and deep purpose of the company. 2. 3. 4. 5. 6. . → But how can you measure the Culture of a company? →You can find the new tool online here: How is your company ranking according to this intelligent tool?

Although, you should also keep into account that: All your comments are welcome below and would love to hear your thoughts! 13 Signs That Someone Is About to Quit, According to Research. Executive Summary If asked to identify the most telling signs that an employee is about to quit, many managers would list behaviors like wearing interview attire to the office, or leaving a resume lying around. 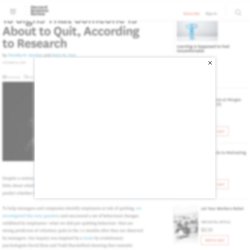 According to Gardner and Horn, however, the cues are much more subtle. They identified 13 key behaviors that employees typically exhibit before they quit. While no one factor is indicative of turnover, Gardner and Horn found that the more an employee exhibited pre-quitting behaviors, the more likely he was to leave an organization within 12 months. Being able to recognize these 13 behaviors is an essential skill for managers and employees considering leaving their current positions. Despite a century of speculation by managers and scholars, we know very little about whether certain cues or signs exhibited by employees can predict whether they’re about to quit. But the romantic realm isn’t the only place where cues can take place. And if you’re in the market for a new job? Leading Change in a Company That’s Historically Bad At It. Executive Summary If you are driving major change at a organization, you are likely stepping into some track record of failure. 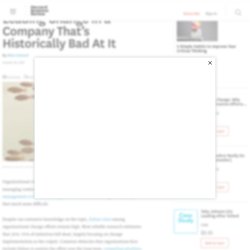 Until you acknowledge the failures your employees have suffered, they won’t believe that committing to change again will be worth it. To rebuild their resilience and win back their confidence, you’ll need to take three important steps at the outset of your initiative. First, acknowledge the pain of the past by apologizing for previous failures. Too many leaders charge ahead, trying to inspire people as though their effort is the first.

Organizational change was once a seasonal experience. Despite our extensive knowledge on the topic, failure rates among organizational change efforts remain high. An executive client I’ve worked with for years — let’s call him Craig — offers an example. Change fatigue, the exhaustion that comes from excessive change, is one of the most common reasons for failure. This scenario is not uncommon. Acknowledge the pain of the past. Explore Popular Debates, Discussions and Critical Thinking… If Your Team Agrees on Everything, Working Together Is Pointless. Untitled. The economy of the future. When it comes to considering the economy of the future, it should be encouraging that none other than the Government of Canada not only recognizes that we’re in an era of fast and substantial change, but also that Canadians must be adaptable and resourceful to succeed in this digital age. 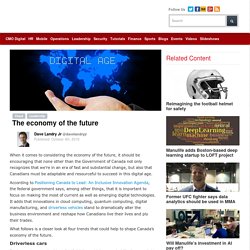 According to Positioning Canada to Lead: An Inclusive Innovation Agenda, the federal government says, among other things, that it is important to focus on making the most of current as well as emerging digital technologies. It adds that innovations in cloud computing, quantum computing, digital manufacturing, and driverless vehicles stand to dramatically alter the business environment and reshape how Canadians live their lives and ply their trades. What follows is a closer look at four trends that could help to shape Canada’s economy of the future.