Researchers develop a drug-sniffing car that can pinpoint your stash. The device, designed by Dr. 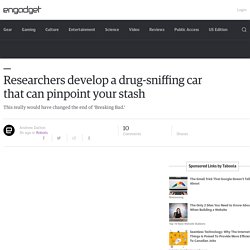 Guido Verbeck of the University of North Texas and East Syracuse-based Inficon, was originally intended to measure highway pollution and other environmental applications, Vice News reports.

Our future of unlimited wealth. Technology advances are making amazing things possible: we finally have a chance to solve the problems that have long plagued humanity such as hunger, disease, energy, and education. 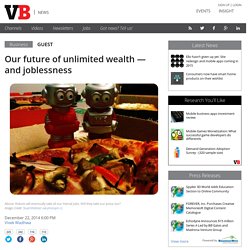 The same technologies that make this abundance possible are however setting the stage for the elimination of the majority of human jobs. Within two decades, we will have almost unlimited energy, food, and clean water; advances in medicine will allow us to live longer and healthier lives; robots will drive our cars, manufacture our goods, and do our chores.

5 waves of technology disruption that are just getting started. Changes in technology are happening at a scale which was unimaginable before and will cause disruption in industry after industry. 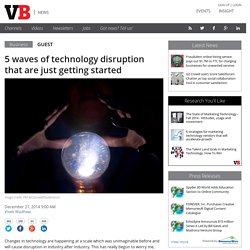 This has really begun to worry me, because we are not ready for this change and most of our leading companies won’t exist 15–20 years from now. Here are five sectors to keep an eye on: 1. 3DPRINTCANALHOUSE by DUS Architects. Step Into The Future: Meet Amelia. IPsoft invites you to join us at Cipriani’s 25 Broadway Landmark Building in New York on Thursday, December 4th, when we will preview the transformation technology of our time: cognitive business automation. 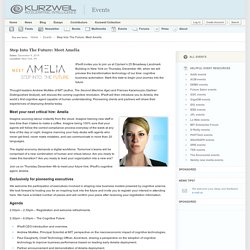 Mark this date to begin your journey into the future. Humans Need Not Apply. FBI warns driverless cars could be used as 'lethal weapons' A Contraceptive Implant with Remote Control. Solar FREAKIN' Roadways! High-tech gadgets for the office of the future - Digital Archives - CBC Player. Elon Musk, Stephen Hawking sound alarm about robots, artificial intelligence. Two leading voices in the world of science and technology warn that robots equipped with artificial intelligence could be leading humanity down a dangerous path. 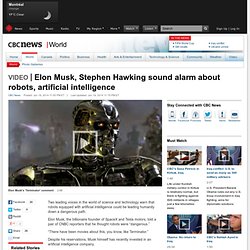 Elon Musk, the billionaire founder of SpaceX and Tesla motors, told a pair of CNBC reporters that he thought robots were “dangerous.” “There have been movies about this, you know, like Terminator.” Despite his reservations, Musk himself has recently invested in an artificial intelligence company. The Future of Work. Video: MetaScan 3 - Emerging Technologies. Multimedia Help Alternative Format - Metascan3_Web_Eng.wmv Transcript (The Policy Horizons Canada’s nexus appears. 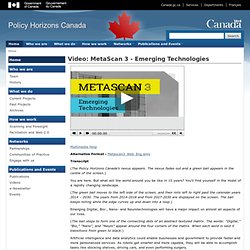 The nexus fades out and a green ball appears in the centre of the screen.) You are here. (The green ball moves to the left side of the screen, and then rolls left to right past the calendar years 2014 – 2030. Computers Are Getting Better Than Humans at Facial Recognition - Norberto Andrade. Summary: Emerging and Readily Available Technologies and National Security: A Framework for Addressing Ethical, Legal, and Societal Issues. ‘Thermal Touch’ will turn any surface into an AR touch screen. “Thermal Touch” senses thermal energy associated with a touch, converting any surface or object into an AR-enhanced touch screen (credit: Metaio) Metaio (as in meta I/O) has developed a prototype of a system called “Thermal Touch” that the Germany-based company says would allow a user of a future wearable headset to make any object touchable. 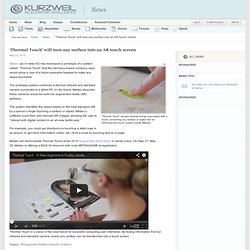 The prototype system combines a thermal infrared and standard camera connected to a tablet PC (in the future, Metaio assumes, these cameras would be built into augmented reality (AR) glasses). Google 'poised to produce 3D imaging tablet' 23 May 2014Last updated at 06:31 ET Google announced its plans for Project Tango in March A tablet computer capable of taking 3D images is set to be put into production by Google, according to reports. 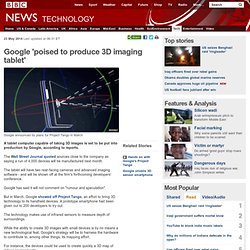 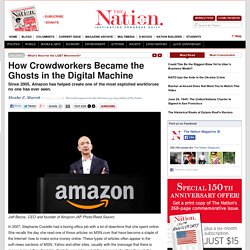 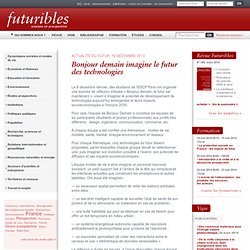 Facebook launches internet.org in an effort to connect the world. Facebook’s Mark Zuckerberg has announced the launch of Internet.org, a website with the goal of making internet available to 5 billion people. Currently 2.7 billion people in the world — just over one-third of the Earth’s population — has access to the Internet. Internet adoption has also grown at a rate of slightly less than 9 per cent per year. The founding members of Internet.org — Facebook, Ericsson, MediaTek, Nokia, Opera, Qualcomm and Samsung — will develop joint projects and share knowledge, regarding the Internet.org initiative. Designer Edge Image of the Day - Super Strong Synthetic Spider Web. Kyle Maxey posted on July 11, 2013 | 3 Comments | 4393 views A Japanese company, Spiber, has just debuted it’s a new synthetic material it calls Qmonos.

Named for the Japanese word for spider web, the new material has the tensile strength of steel and the flexibility of rubber. Researchers at Spiber believe that their new fiber could be used to strengthen products from clothing to cars to medical devices and space suits. Fabbing + Hacking. Development May Do Away With the Need For Fertilizers As Plants Made To Fix Own Nitrogen. The Wheelchair Is 2,300 Years Old. There’s Finally A Better Option. Tacocopter Aims To Deliver Tacos Using Unmanned Drone Helicopters. Technology, Not Law, Limits Mass Surveillance. The most badass thing you'll see today: a bald eagle with 3D-printed beak. Future-Changing Inventions Ready to Launch. Fire with Fire - Ross Kauffman - GE FOCUS FORWARD. Human organs 'could be grown in animals within a year' Researchers Use 3D Printing To Create Microbatteries. Disruptive technologies: Advances that will transform life, business, and the global economy.

Technology - 3D printing powered by thought. Search results for grin and bear it. Sullivan: These are the 50 Most Innovative Technologies in 2013. LONDON - 8 May, 2013 - Up to 85 per cent of technologies developed globally never make it to the commercial world. Business and investors need to closely assess the potential of a given technology platform to understand the true market prospects it holds and to evaluate the risk-reward elements. 8 Exponential Trends That Will Shape Humanity. Our global society has entered a period of accelerated change, and these changes are reshaping entire industries, economic models and institutions. The Rise of Big Data. Mechanical energy harvester replaces small batteries. 3D-imaging brain tissue at 1 micron resolution. Government lab reveals it has operated quantum internet for over two years. Turning human stem cells into brain cells sheds light on neural development. News - 3D printed gun shoots real bullets.