Businessinsider. As Uber, the San Francisco-based ride-booking service, begins expanding in China, the mainland’s two largest providers of apps that link passengers to drivers announced their merger on Saturday, forming a $6 billion company. 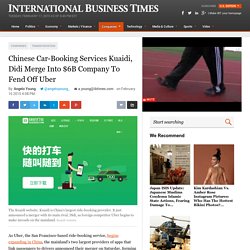 The new entity brings together two rivals that will retain their separate brand identities and will have the home-field advantage against the foreign rival. "The new company after the merger will be an important provider in the global mobile transport sector," said a joint statement from Kuaidi Dache, which is controlled by Chinese e-commerce company Alibaba Inc., and Didi Dache, which boasts media and Internet company Tencent Holdings as a major investor.

The two ride-booking services, which until Saturday were locked in close competition, together almost completely control the Chinese ride-booking market, which hit 150 million users last fall, according to Chinese data-tracking firm Analysis International. Mapping the Four C's of Chinese Wealth. SHANGHAI — Conversations about China have long stopped asking if decades of breakneck growth have widened the gap between rich and poor. 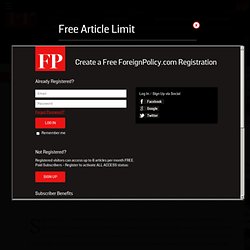 English-language media is now more likely to focus on whether the country's inequality is merely as deplorable as the United States', or if it has already joined Latin America and sub-Saharan Africa to become one of the globe's most socially stratified places. The map below gives a vivid picture of that (click any image to enlarge): China's inequality is regional, as it is in many large countries. Think services, inclusion and green[1] Updated: 2014-03-26 09:07 By Christine Lagarde (China Daily) Two defining features of today's new global economy are the rise of Asia and the power of interconnections. 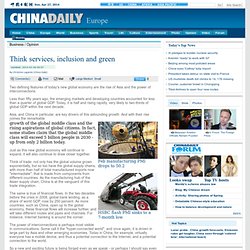 Less than fifty years ago, the emerging markets and developing countries accounted for less than a quarter of global GDP. Today, it is half and rising rapidly, very likely to two-thirds of global GDP within the next decade. Asia, and China in particular, are key drivers of this astounding growth. China Third Plenum: Leaders unveil key reforms. 12 November 2013Last updated at 10:42 ET There was tight security for the summit in Beijing China's leaders have unveiled a series of reforms aimed at overhauling its economy over the next decade. 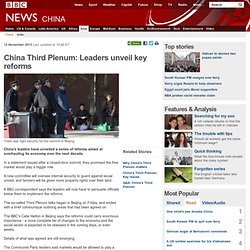 In a statement issued after a closed-door summit, they promised the free market would play a bigger role. A new committee will oversee internal security to guard against social unrest, and farmers will be given more property rights over their land. A BBC correspondent says the leaders will now have to persuade officials below them to implement the reforms. China: A New Approach for Efficient, Inclusive, Sustainable Urbanization. Report Makes the Case for Market-Based Allocation of Land, People and Capital BEIJING, March 25, 2014 – A new report recommends that China curb rapid urban sprawl by reforming land requisition, give migrants urban residency and equal access to basic public services, and reform local finances by finding stable revenues and by allowing local governments to borrow directly within strict central rules. 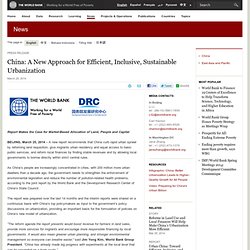 As China’s people are increasingly concentrated in cities, with 200 million more urban dwellers than a decade ago, the government needs to strengthen the enforcement of environmental legislation and reduce the number of pollution-related health problems, according to the joint report by the World Bank and the Development Research Center of China’s State Council. “The reform agenda the report presents would boost revenue for farmers in land sales, provide more services for migrants and encourage more responsible financing by local governments.

Reforming land management and institutions. When a Cold War in East Asia is not a Cold War. Author: Stephan Frühling, ANU In recent months, it has become fashionable to describe the emerging strategic rivalry between China and the US and its allies as a new Cold War — even rival trade negotiations are likened to an ‘economic Cold War’. 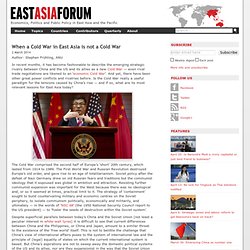 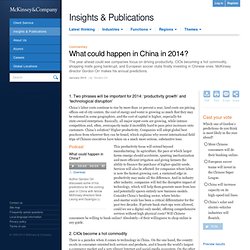 Two phrases will be important for 2014: ‘productivity growth’ and ‘technological disruption’ China’s labor costs continue to rise by more than 10 percent a year, land costs are pricing offices out of city centers, the cost of energy and water is growing so much that they may be rationed in some geographies, and the cost of capital is higher, especially for state-owned enterprises. Basically, all major input costs are growing, while intense competition and, often, overcapacity make it incredibly hard to pass price increases onto customers. 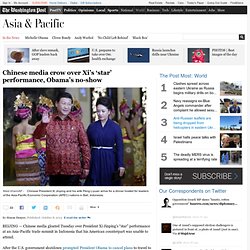 In contrast, America has lost an important chance to perform,” the Hong Kong-based Communist Party newspaper Ta Kung Pao said in an editorial. “The influence of the U.S. is questioned more and more.” The government in Beijing has long been uneasy about Obama’s strategic goal of rebalancing U.S. foreign policy toward Asia, which many here saw as an attempt to contain China. Wen Wei Po, another Party newspaper paper based in Hong Kong, said the impasse in Washington proves that the United States no longer has the clout to back up its Asian strategy. 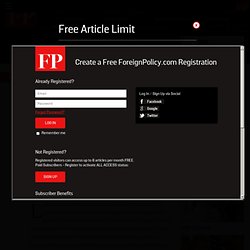 U.S. President Barack Obama must manage the time he spends on domestic and international politics, so he doesn't neglect thorny national issues, or overlook international situations where the United States claims to desire to play an important role. When a nation's foreign policy is more assertive than its domestic policy, problems can arise. Strategic-proposal-ENGLISH-25-oct-low-resolution.pdf. Talking point. China in Africa – New challenges beyond the commodities supercycle November 1, 2013 Following the decline in China's demand for commodities during the summer months, its imports of crude oil, copper and iron ore are slowly beginning to recover again.

To this day, China's economic relations with Africa are shaped by securing the supply of resources by financing infrastructure and other major projects. There is indeed much to suggest that China's future activities will be more complex and by no means limited to the commodities sector. Africa's importance for Chinese external trade has increased steadily over the last ten years.

China's energy requirements remain huge, even though weaker growth, the changeover to alternative energies and reining in coal consumption should curb demand over the medium term. Firstly, Africa is becoming increasingly attractive as a market where products can be sold, and not just labour-intensive imported items. . © Copyright 2013. China's State Council think tank sets out roadmap for reform.

A top government think tank has unveiled a detailed road map for a series of far-reaching economic policy changes, in one of the strongest indications yet that the Communist Party intends to stay on the path of reform. 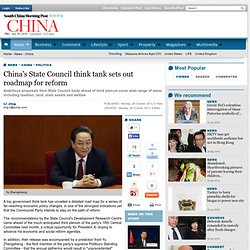 In particular, China has rapidly expanded its environmental footprint in Africa, largely because of its burgeoning economic presence through trade and aid projects such as infrastructure and public works. These large-scale projects, commonly managed by state-owned enterprises (SOEs), tend to be in sectors that are environmentally sensitive such as oil and gas exploration and construction of major infrastructure. At the international level, global financial institutions along with growing pressure from civil society organizations are encouraging China to demonstrate a commitment to addressing the environmental impacts of its overseas projects.

Imminent Threats to U.S.-China Relations. What Is a 'Human Flesh Search,' and How Is It Changing China? - Jessica Levine. "In a way, this is like an ad hoc, ground-up rule of law. " Shaanxi Safety Supervision Bureau chief Yang Dacai became the object of intense online scrutiny and caricature after a photo surfaced of him grinning beside a burning bus.

(Tea Leaf Nation) As it smoldered, Yang Dacai (杨达才) smiled. Then the chief of the Shaanxi Safety Supervision Bureau, Yang had been dispatched to the scene of an August bus fire that killed 36 people along a stretch of Yan'an (延安) highway in the central Chinese province. China into the Arctic - As ice cover yields to global warming, many countries are eying a range of economic benefits, but they may be harder to attain than imagined By Richard N. Cooper. What China’s five-year plan means for business. China’s recently announced 12th five-year plan aims to transform the world’s second-largest economy from an investment-driven dynamo into a global powerhouse with a steadier and more stable trajectory. The plan affects domestic and foreign companies in all industries. To help senior managers decode and understand its provisions, we analyzed the potential impact on 33 industries. Xinhua Insight: Why the CPC's third plenary session is important.

China’s environmental future: The power of the people. China faces a deep and enduring environmental crisis. Less than 1 percent of the country’s 500 largest cities meet World Health Organization clean-air criteria. China's Internet User Base Hits 591 Mln in H1 2013. China's Internet Growth In Two Charts : Parallels. China has by far the most Internet users in the world, and it appears that soon half the country will be on the Web, thanks largely to cellphones and other mobile devices. In percentage terms, Iceland, Norway and Sweden have the highest Internet penetration, with more than 90 percent of residents online.

The U.S. is 27th, with 78 percent of Americans online. New law in China requires adults to visit elderly parents often. Louise Watt, The Associated Press Published Monday, July 1, 2013 1:03PM EDT Last Updated Monday, July 1, 2013 1:50PM EDT BEIJING -- Mothers and fathers aren't the only ones urging adult children to visit their parents. Wukan: After the Uprising. China is no stranger to rural uprisings. China: The electronic wastebasket of the world. Did you ever wonder what happens to your old laptop or cellphone when you throw it away? Henry Kissinger: China, the US, and a Common Challenge. Small B.C. First Nation challenging Canada-China free trade agreement. Members of the Hupacasath First Nations, seen in 2008 at a forestry protest, are now challenging a Canada-China free trade agreement. Photograph by: Wayne Leidenfrost , PNG file photo June 5, 2013 Small B.C.

China's Search for A New Energy Strategy. Much like the United States, China has an “all of the above” energy strategy: it plans to continue to rely on traditional sources of energy even as it makes the transition to cleaner fuels. America and China: The summit. China to Seek More Equal Footing With U.S. in Talks. The Rise of China's Reformers? Study Finds Massive Investment in Europe by Chinese State Companies. Premier stresses foresight in economic policymaking.