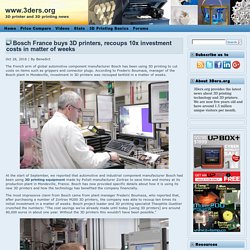 According to Frederic Boumaza, manager of the Bosch plant in Mondeville, investment in 3D printers was recouped tenfold in a matter of weeks. At the start of September, we reported that automotive and industrial component manufacturer Bosch had been using 3D printing equipment made by Polish manufacturer Zortrax to save time and money at its production plant in Mondeville, France. Bosch has now provided specific details about how it is using its new 3D printers and how the technology has benefited the company financially. 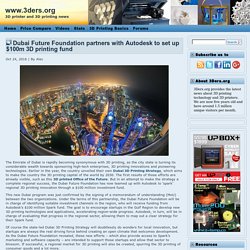 Earlier in the year, the country unveiled their own Dubai 3D Printing Strategy, which aims to make the country the 3D printing capital of the world by 2030. The first results of those efforts are already visible, such as this 3D printed Office of the Future. But in an attempt to make the strategy a complete regional success, the Dubai Future Foundation has now teamed up with Autodesk to ‘spark’ regional 3D printing innovation through a $100 million investment fund. UAE 'Smart Buildability Index' to standardize 3D printed buildings and construction. Oct 26, 2016 | By Tess With every new development in the construction industry, one of the hardest and most crucial steps of having them implemented on a large scale is having them tested and standardized. 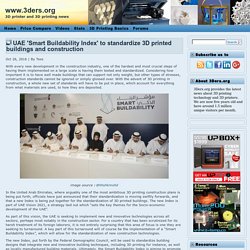 Considering how important it is to have well made buildings that can support not only weight, but other types of stresses, construction standards cannot be ignored or simply glossed over. With the advent of 3D printing in construction, a whole new set of standards will have to be put in place, which account for everything from what materials are used, to how they are deposited. image source：@hhshkmohd. TU Delft researchers pioneer self-folding medical implants using 3D printing and origami techniques. Oct 24, 2016 | By Alec The 3D bioprinting of organ and human tissue implants is fantastic, but it’s just one part of the larger field of tissue regeneration – the most widely anticipated medical breakthrough field, which could enable damaged tissues, organs and bones to simply grow back again. 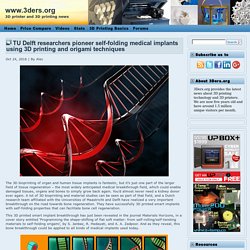 You’d almost never need a kidney donor ever again. A lot of 3D bioprinting and material studies can be seen as part of that field, and a Dutch research team affiliated with the Universities of Maastricht and Delft have realized a very important breakthrough on the road towards bone regeneration. They have successfully 3D printed smart implants with self-folding properties that can facilitate bone cell regeneration. This 3D printed smart implant breakthrough has just been revealed in the journal Materials Horizons, in a cover story entitled ‘Programming the shape-shifting of flat soft matter: from self-rolling/self-twisting materials to self-folding origami’, by S.

Mihai Chiriac believes 3D printed aquaponic homes can bring ecosystems back to urban areas. Oct 25, 2016 | By Alec Even the most optimistic futurist will tell you that significant challenges await future generations. 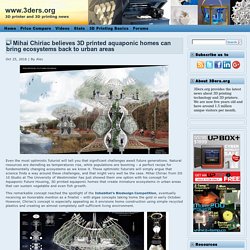 Natural resources are dwindling as temperatures rise, while populations are booming – a perfect recipe for fundamentally changing ecosystems as we know it. Those optimistic futurists will simply argue that science finds a way around these challenges, and that might very well be the case. Mihai Chiriac from DS 10 Studio at The University of Westminster has just showed them one option with his concept for Aquaponic Future Housing, 3D printed aquaponic homes that create miniature ecosystems in urban areas that can sustain vegetable and even fish growth.

This patient defied doctors and 3D printed his own heart. Nov 9, 2016 | By Benedict After being diagnosed with Marfan syndrome, a disorder which affects the body's connective tissues, engineer Tal Golesworthy refused to undergo invasive and risky preemptive surgery. 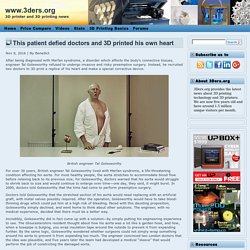 Instead, he recruited two doctors to 3D print a replica of his heart and make a special corrective device. British engineer Tal Golesworthy For over 30 years, British engineer Tal Golesworthy lived with Marfan syndrome, a life-threatening condition affecting his aorta. For most healthy people, the aorta stretches to accommodate blood flow before relaxing back to its previous size; for Golesworthy, doctors warned that his aorta would struggle to shrink back to size and would continue to enlarge over time—one day, they said, it might burst.

Université Rennes students well on their way to 3D printing a functional code breaking Enigma Machine. Oct 29, 2016 | By Andre Keeping secrets from one's enemy is and always has been integral to gaining an upper hand in the strategic battlefield that is war. 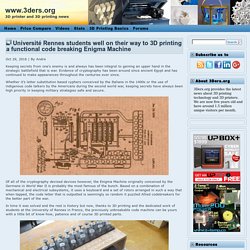 Evidence of cryptography has been around since ancient Egypt and has continued to make appearances throughout the centuries ever since. Whether it’s letter substitution based cyphers conceived by the Italians in the 1400s or the use of indigenous code talkers by the Americans during the second world war, keeping secrets have always been high priority in keeping military strategies safe and secure. Of all of the cryptography devised devices however, the Enigma Machine originally conceived by the Germans in World War II is probably the most famous of the bunch.

Based on a combination of mechanical and electrical subsystems, it uses a keyboard and a set of rotors arranged in such a way that when tapped, the code letter that is outputted is seemingly so random it puzzled Allied codebreakers for the better part of the war. Les ventes d'imprimantes 3D auraient doublé entre 2015 et 2016. Durée d'impression maximum - Discussion - Forum pour les imprimantes 3D et l'impression 3D. 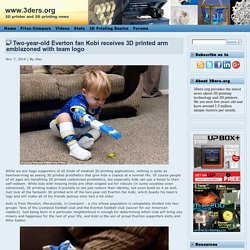 Of course people of all ages are benefiting 3D printed customized prosthetics, but especially kids can use a boost to their self-esteem. While kids with missing limbs are often singled out for ridicule (in some societies even ostracized), 3D printing makes it possible to not just restore their identity, but even build on it as well. Just look at the fantastic 3D printed arm of the two-year-old Everton fan Kobi, which boasts his team’s logo and will make all of his friends jealous once he’s a bit older. Kobi is from Moreton, Merseyside, in Liverpool – a city whose population is completely divided into two groups: fans of the Liverpool football club and the Everton football club (soccer for our American readers).

Most importantly, Kobi likes it too. 3D Veterans completes first educational 3D printing bootcamp, aims to train 400 vets per year. Oct 31, 2016 | By Alec It’s one of the hidden problems of American society, only visible if it affects you or one of your family members or close friends: veteran reintegration. 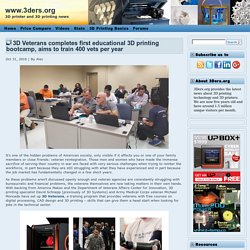 Those men and women who have made the immense sacrifice of serving their country in war are faced with very serious challenges when trying to reinter the workforce, in part because they are still struggling with what they have experienced and in part because the job market has fundamentally changed in a few short years. As these problems aren’t discussed openly enough and veteran agencies are consistently struggling with bureaucratic and financial problems, the veterans themselves are now taking matters in their own hands. The concept is ambitious. As the Obama administration revealed during Manufacturing Day 2016, 3D Veterans is seeking to train 400 veterans every year through a special bootcamp that will be held at locations in Los Angeles, Carson, San Francisco, Philadelphia and El Paso. Retired U.S. 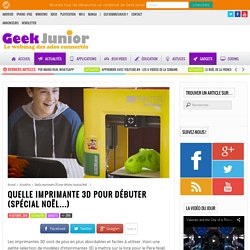 Il y avait des ateliers très nombreux, variés, et plein de “Makers” plus talentueux les uns que les autres. Paraguayan company Po aims to make 3D printed prosthetic hands accessible to all. Une semaine d’impression 3D #46. Scientists have developed a zero-gravity metal 3D printer for space. Nov 22, 2016 | By Tess With the International Space Station’s Additive Manufacturing Facility (AMF) in full swing, the concept of having a 3D printer in space is becoming increasingly familiar. Despite these advances, however, there are still a number of hurdles and challenges that must be met in order for additive manufacturing to be used to its full potential in the cosmos. Metal 3D printing, for instance, remains a difficult task, but one that could prove essential for maintaining equipment and creating parts necessary for journeys to Mars. German 3D printed prosthetics manufacturer Mecuris secures major investment.

Nov 22, 2016 | By Tess Mecuris GmbH, a 3D printed orthotics and prosthetics manufacturer based in Munich, Germany, has just announced that it has secured a significant investment through a successful seed funding round. The funding, though of an undisclosed amount, comes from high-profile backers, including High-Tech Gründerfonds (HTGF) and Bayern Kapital.

According to Mecuris, the new investment funds will be put towards expanding and further developing its cloud-based AI design technology and 3D printed prosthetics. Krone Golf comes to the fore with 3D printed KD-1 driver. Nov 22, 2016 | By Benedict Krone Golf and CRP Group have joined forces to develop a partially 3D printed golf driver. The club is made using both additive and subtractive manufacturing techniques, and features optimized surface thicknesses, a controlled head weight, and a tuned center of gravity. 3D printing is being used more and more in the world of sport, with high-tech equipment like 3D printed running shoes, 3D printed lacrosse sticks, and 3D printed footballs changing the way the sporting arena thinks about producing its gear. Golf, unique both in its gameplay and its culture, could become the latest sport to adopt 3D printing technologies in the name of improved player performance, as golfing goods supplier Krone Golf has teamed up with CRP Group, an Italian industrial group and racing specialist, to develop a set of high-performance 3D printed golf clubs.

The KD-1 drivers, made from Windform SP carbon composite, utilize both additive and subtractive manufacturing. 3D bioprinting market dominated by North America, expected to grow at CAGR of 35.9% Nov 11, 2016 | By Benedict According to a report from P&S Market Research, North America holds the largest share in the global 3D bioprinting market, which was valued at almost $100 million in 2015. The global market is expected grow at a CAGR of 35.9% between 2016 and 2022. Russian bioprinting company 3D Bioprinting Solutions The medical sector and its millions of patients suffering from a major problem: there is a massive imbalance between the number of people waiting for critical organ transplants and the number of donated organs actually available. Simply put, the lack of available organs means that more patients are dying than could otherwise be the case.

North America Accounts for the Largest 3D Bioprinting Market Due to Technological Advancements and Innovations - openPR. The global 3D bioprinting market was valued at $98.6 million in 2015, and it is expected to grow at a CAGR of 35.9% during 2016 - 2022. The growth of the global market is largely driven by increasing large demand of tissues and organs for transplantation and the innovations and advancements in technology for 3D bioprinting. A large number of people across the globe are waiting for organ or tissue transplant, due to the huge gap in demand for organs transplant and donors. This has created huge traction in the 3D printing industry for developing live tissues and organs.