Menswear: the front row power list. The words “power front row” conjure images of an inscrutable Anna Wintour, but in 2014 there are a lot of globally important front rows she doesn’t sit on. 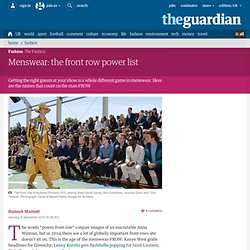 This is the age of the menswear-FROW. Kanye West grabs headlines for Givenchy; Lenny Kravitz gets flashbulbs popping for Saint Laurent; Tinie Tempah Instagrams at Burberry. The profile of the man-FROW has risen as menswear sales have boomed by 18% in the past five years. We have London Collections: Men now as well as the shows in Paris and Milan. As the shows have become more important, so have the people who attend them. “Across all markets,” Bidder says, “menswear consumers tend to be less influenced by celebrity endorsement than women - so the curation of a front row can be rooted in a designer’s personal choice of creatives they respect or know, irrespective of celebrity.” No Signs of Slowing in the Global Menswear Market. LONDON, United Kingdom — In 1994, journalist Mark Simpson coined the term ‘metrosexual’ to describe contemporary, city-dwelling men who placed increased emphasis on personal grooming and fashion. 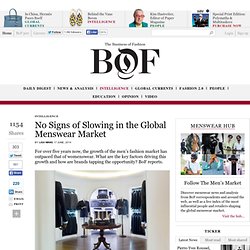 At the time, the often-lampooned stereotype of the well-moisturised modern dandy stood in direct contrast to traditional notions of masculinity. Two decades on, the archetype has become commonplace. It is not only socially acceptable but desirable for men to care about (and spend money on) their personal appearance, driving a veritable boom in the men’s fashion market that shows no signs of abating. (In fact, Simpson has just coined a new term — the ‘spornosexual’ — to describe today’s even more extreme, body, image and styled-obsessed version of the metrosexual). “I think the world’s attitudes towards masculinity have really progressed. Men's fashion: Online suits you sir.

The men’s fashion market is enjoying strong growth thanks to online channels and better brand marketing. 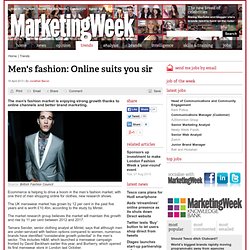 Ecommerce is helping to drive a boom in the men’s fashion market, with one third of men shopping online for clothes, new research shows. The UK menswear market has grown by 12 per cent in the past five years and is worth £10.4bn, according to the study by Mintel. The market research group believes the market will maintain this growth and rise by 11 per cent between 2012 and 2017. Tamara Sender, senior clothing analyst at Mintel, says that although men are under-serviced with fashion options compared to women, numerous brands have identified “considerable growth potential” in the men’s sector. This includes H&M, which launched a menswear campaign fronted by David Beckham earlier this year, and Burberry, which opened its first menswear store in London last October. Fashion 'accounts for around 83% of young men’s online spend' - Digital Intelligence daily digital marketing research. Ofcom estimates that UK consumers spend an average of £1,083 each year online*, and Rakuten LinkShare’s research reveals that nearly one in four 26-35 year old men spends at least £900 per year on clothing online (24%), the equivalent of 83 percent of their annual online spend. 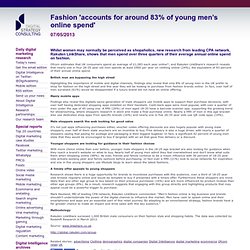 British men are bypassing the high street Highlighting the importance of mobile and digital channels, findings also reveal that only 8% of young men in the UK prefer to shop for fashion on the high street and this year they will be looking to purchase from fashion brands online. In fact, over half of men surveyed (61%) would be disappointed if a luxury brand did not have an online offering. Manly mobile apps Findings also reveal this digitally savvy generation of male shoppers use mobile apps to support their purchase decisions, with over half having dedicated shopping apps installed on their handsets. Male shoppers search the web looking for good value A timely offer appeals to young shoppers Methodology. All sewn up - UK menswear market grows 18% in the last 5 years. Ahead of LC:M (London Collections: Men) latest research from Mintel finds British men really are dedicated followers of fashion, as the UK menswear market grew by an impressive 18% between 2008 and 2013 to reach £12.9 billion in 2013. 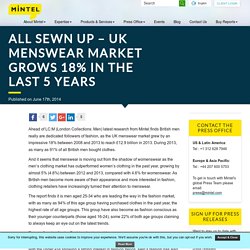 During 2013, as many as 91% of all British men bought clothes. Mobile Statistics - Exclusive: The best mobile customer is a man on an iPad. When it comes to mobile average order value, tablets beat smartphones, Apple tops Android, and men spend more than women, according to the Internet Retailer-exclusive, 5,500-retailer Shopgate Mobile Commerce Index. 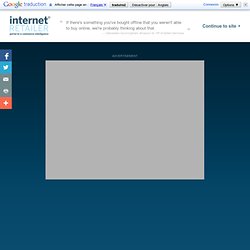 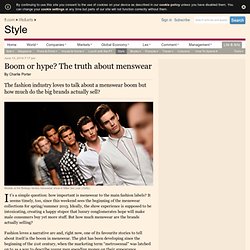