I Am Jewish and a Person of Color. Mexican Tostadas Recipe. Ep-84 Outward and Inward Conversations. Zohran Kwame Mamdani is an Indian-Ugandan New Yorker, housing counselor, a democratic socialist, and a candidate to represent Astoria in the State Assembly. 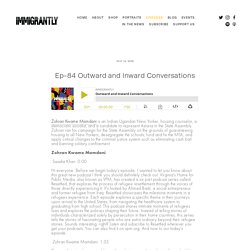 Zohran ran his campaign for the State Assembly on the grounds of guaranteeing housing to all New Yorkers, desegregate the schools, fund and fix the MTA, and apply critical changes to the criminal justice system such as eliminating cash bail and banning solitary confinement Zohran Kwame Mamdani Saadia Khan 0:00 Hi everyone. Before we begin today's episode, I wanted to let you know about this great new podcast I think you should definitely check out. Zohran Kwame Mamdani 1:35. Ep-83 "Decolonizing Self-Love" Today's guest, DJ Bembona, is taking the New York music scene by storm. 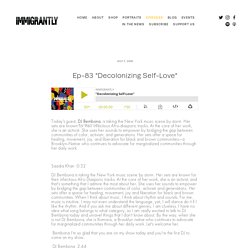 Her sets are known for their infectious Afro-diasporic tracks. At the core of her work, she is an activist. She uses her sounds to empower by bridging the gap between communities of color, activism, and generations. Her sets offer a space for healing, movement, joy, and liberation for black and brown communities—a Brooklyn-Native who continues to advocate for marginalized communities through her daily work.

Saadia Khan 0:32 DJ Bembona is taking the New York music scene by storm. Ep-82 A Time for Reflection. A Perpetual State of Irony. Shreya Tanisha is a multi-media artist and the founder of MZL Productions, a London-based film and theatre company promoting the work of artists of color. 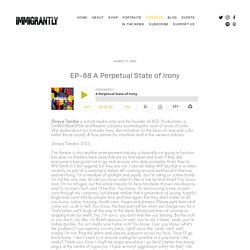 We spoke about our nomadic lives, discrimination on the basis of race and color within the art world, & how patriarchy manifests itself in the western cultures. "We're Different Chapters of the Same Book" Asifa Lahore is Britain’s first out Muslim Drag Queen. 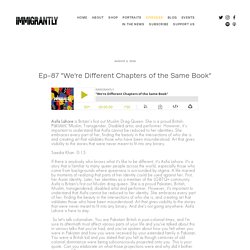 She is a proud British-Pakistani, Muslim, Transgender, Disabled artist, and performer. However, it’s important to understand that Asifa cannot be reduced to her identities. She embraces every part of her, finding the beauty in the intersections of who she is and creating art that validates those who have been misunderstood. Art that gives visibility to the stories that were never meant to fit into any binary. Saadia Khan 0:15. Her Bold sense of Purpose. Maytha Alhassen is a multi-hyphenated career woman and activist. 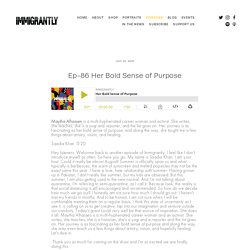 She writes, she teaches, she is a yogi and reporter, and the list goes on. Her journey is as fascinating as her bold sense of purpose, and along the way, she taught me a few things about artistry, vision, and healing. Saadia Khan 0:20 Hey listeners. Welcome back to another episode of Immigrantly. Thank you so much for coming on the show and I'm so excited we are finally doing this. Maytha Alhassen 3:05 Yes, yes, yes. Listen to What Your Kids Are Saying. Our today's guest is Maliha Abidi. 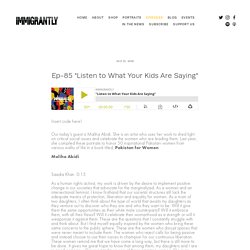 She is an artist who uses her work to shed light on critical social issues and celebrate the women who are leading them. Ep-81 Underrepresentation in Hollywood. Ep-97 "Politics of Authenticity" In a time where the current events in America feel like they’re moving us closer to a dystopian reality, it’s hard not to feel frazzled by it all. 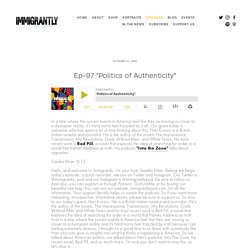 Our guest today is someone who has spent a lot of time thinking about this. Pico de Gallo Recipe. By Cassandra Clifford My mother once offered to make pico de gallo for a family party with my father’s side of the family and absolutely everyone asked her for the recipe. 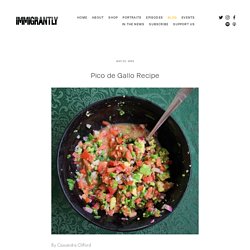 The next time my dad hosted a party, my mom tasked me with making the pico de gallo in front of everyone in a cooking demo, though pico de gallo is really more chopping and assembling than anything else--no flame involved! I didn’t realize this until going to a favorite Tex-Mex restaurant months ago, but most pico de gallo recipes do not include avocado. This one does, and in my opinion, that makes it the best ever pico de gallo recipe. A Bit of History of Immigration in the U.S. By Cassandra Clifford June is Immigrant Heritage Month, a celebration of the accomplishments and contributions immigrants and their children have made in shaping the history, strengthening the economy, and enriching the culture of the United States. 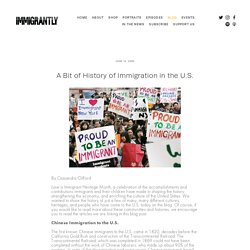 We wanted to share the history of just a few of many, many different cultures, heritages, and people who have come to the U.S. today on the blog. Of course, if you would like to read more about these communities and histories, we encourage you to read the articles we are linking in this blog post. Chinese Immigration to the U.S. The first known Chinese immigrants to the U.S. came in 1820, decades before the California Gold Rush and construction of the Transcontinental Railroad.

Since the vast majority of Chinese immigrants were men, growth of the Chinese American population was initially limited and further stifled when Congress passed the Chinese Exclusion Act in 1882. Tortillas, Guacamole, and Reflections on Family Food History. By Cassandra Clifford To wrap up our recipe Monday series with the conclusion of season 6 of Immigrantly, I thought that I would share two very simple recipes from my mom which very much remind me of my childhood and remind her of hers. 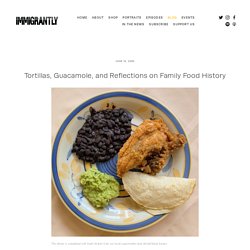 For me, I remember spending rainy or snowy days at home, making tortillas from scratch with my mom or going to a party with a big bowl of guacamole and just barely dipping the edge of a tortilla chip in the guacamole because it was too spicy for me. For my mother, tortillas and beans are her bread and butter. Both of them are peasant food in Mexico, but she isn’t shy about or ashamed of eating them, now or ever. In fact, there are plenty of days when all she wants to eat is a plate of tortillas and beans. The Unclenched Fist. By Tanya Khan It’s not that I didn’t know I was different from everyone around me; after all, I didn’t have pin-straight blonde hair, porcelain skin, or gemstone-like colored eyes. Growing up in white suburbia was all I had ever known. I never questioned why everyone around me was Caucasian or why there was not a single person within a 20-mile radius of me that spoke my mother tongue.

I never questioned why people would give me odd stares inside the local grocery store. How Do I Measure My Identity? By Joanna Miral What comes to your mind when I say I’m Greek-American? My Big Fat Greek Wedding, John Stamos, maybe Percy Jackson? We’re not a big bunch (Wikipedia says we number about 1.4 million, or roughly 0.6% of the U.S. population), but we’ve certainly made an impact on pop culture. When my dear friend Cassandra asked me to write a blog post for Immigrantly, I was a little stumped about what to write about. Though I talk about being Greek a decent amount, in many ways I’ve always felt my connection to Greece and Greek culture was superficial. This is probably aggravated by the fact that I have generally had unpleasant experiences in the Greek community spaces I was exposed to. Speaking of Christ, I’m not very connected to the Greek Church either, which is basically the center of Greek-American community. Let's Talk British Colonialism.