Nerves of the Arm. Sciatic Nerve Anatomy. The sciatic nerve is the largest and longest single nerve in the human body, about as big around as a man's thumb at its largest point. 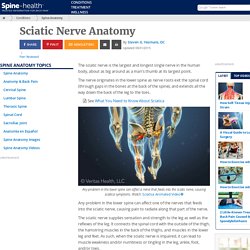 See Spinal Anatomy and Back Pain. Chap 8 nervous tissue. Animal Systems: Nervous System. Since you're reading this page, we figure you've got a nervous system. 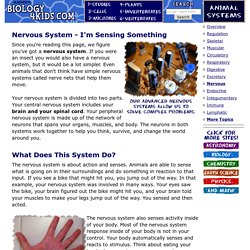 Nervous System. The nervous system is an organ system in charge of sending messages to and from the brain and spinal cord to and from all parts of the body. 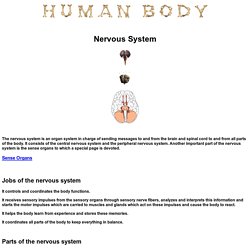 It consists of the central nervous system and the peripheral nervous system. Another important part of the nervous system is the sense organs to which a special page is devoted. Sense Organs Jobs of the nervous system It controls and coordinates the body functions. It receives sensory impulses from the sensory organs through sensory nerve fibers, analyzes and interprets this information and starts the motor impulses which are carried to muscles and glands which act on these impulses and cause the body to react. Object moved. The brain is what it is because of the structural and functional properties of interconnected neurons. 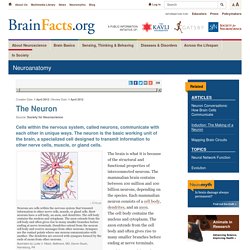 The mammalian brain contains between 100 million and 100 billion neurons, depending on the species. Each mammalian neuron consists of a cell body, dendrites, and an axon. Cells of the Nervous System. Neurons There are two broad classes of cells in the nervous system: neurons, which process information, and glia, which provide the neurons with mechanical and metabolic support.Three general categories of neurons are commonly recognized (Peters, Palay, & Webster, 1976). 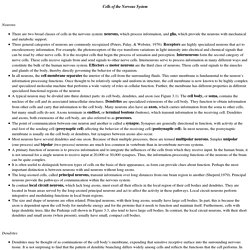 Receptors are highly specialized neurons that act to encodesensory information. For example, the photoreceptors of the eye transform variations in light intensity into electrical and chemical signals that can be read by other nerve cells. It is the receptor cells that begin the process of sensation and perception. Interneurons form the second category of nerve cells. Dendrites Dendrites may be thought of as continuations of the cell body’s membrane, expending that sensitive receptive surface into the surrounding nervous tissue.

The Cell Body The cell body integrates synaptic input and determines the message to be transmitted to other cells by the axon, but that is not its only function. Mitochondria Nucleus Axon Endfeet. Nervous System: Explore the Nerves with Interactive Anatomy Pictures. [Continued from above] . . . conditions inside and outside of the body and send this information to the CNS. 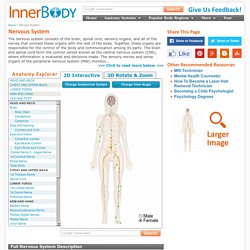 Efferent nerves in the PNS carry signals from the control center to the muscles, glands, and organs to regulate their functions. Nervous TissueThe majority of the nervous system is tissue made up of two classes of cells: neurons and neuroglia. Neurons. Neurons, also known as nerve cells, communicate within the body by transmitting electrochemical signals. Neurons look quite different from other cells in the body due to the many long cellular processes that extend from their central cell body.

Brain The brain, a soft, wrinkled organ that weighs about 3 pounds, is located inside the cranial cavity, where the bones of the skull surround and protect it.