Plan 9 from Outer Space (1959) Is there any classification of academic disciplines? : General Science & Technology. Systemics. In the context of systems science and systems philosophy, the term systemics refers to an initiative to study systems from a holistic point of view. 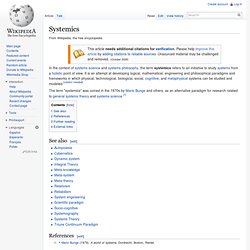 It is an attempt at developing logical, mathematical, engineering and philosophical paradigms and frameworks in which physical, technological, biological, social, cognitive, and metaphysical systems can be studied and modeled. [citation needed] The term "systemics" was coined in the 1970s by Mario Bunge and others, as an alternative paradigm for research related to general systems theory and systems science.[1] See also[edit] References[edit] Further reading[edit] External links[edit]

Statement of Intent. The achievements of modern neuroscience are staggering. 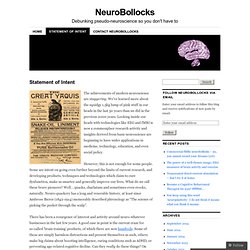 We’ve learned more about the squidgy 1.5kg lump of pink stuff in our heads in the last 50 years than we did in the previous 2000 years. Looking inside our heads with technologies like EEG and fMRI is now a commonplace research activity and insights derived from basic neuroscience are beginning to have wider applications in medicine, technology, education, and even social policy. However, this is not enough for some people. Some are intent on going even further beyond the limits of current research, and developing products, techniques and technologies which claim to cure dysfunction, make us smarter and generally improve our lives. What do we call these brave pioneers? 100 Ideas That Changed Art. By Maria Popova From cave paintings to the internet, or how art and cultural ideology shape one another. 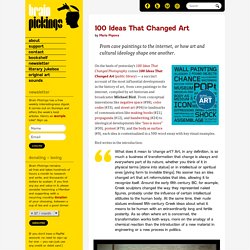 On the heels of yesterday’s 100 Ideas That Changed Photography comes 100 Ideas That Changed Art (public library) — a succinct account of the most influential developments in the history of art, from cave paintings to the internet, compiled by art historian and broadcaster Michael Bird. Leonie Cox. If Cops Understood Crowd Psychology, They'd Tone Down The Riot Gear. One of the clearest lessons from Ferguson is that the militarization of local police has become a major problem across the United States. 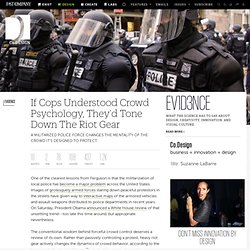 Images of grotesquely armed forces staring down peaceful protestors in the streets have given way to interactive maps of the armored vehicles and assault weapons distributed to police departments in recent years. On Saturday, President Obama announced a White House review of that unsettling trend--too late this time around, but appropriate nevertheless. The conventional wisdom behind forceful crowd control deserves a review of its own. Rather than passively controlling a protest, heavy riot gear actively changes the dynamics of crowd behavior, according to the best new behavioral evidence. The twisted outcome is one that too many police forces have yet to learn: the military-style equipment intended to enhance public safety often ends up threatening it. Coding is a New Language for all 6th Graders in Minnesota School District. 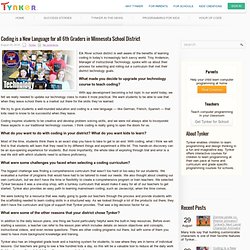 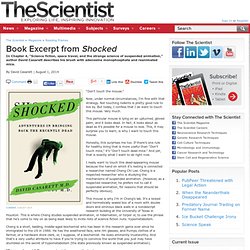 CURRENT, AUGUST 2014“Don’t touch the mouse.” The rise and fall of bitcoin: Inside the virtual currency you can actually spend (Wired UK) This article was taken from the January 2012 issue of Wired magazine. 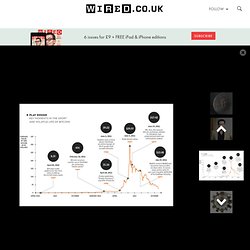 Bitcoin P2P e cash paper. Pregnancy Stress Spans Generations. The stressors a female rat experiences during pregnancy can have repercussions for her granddaughters, a study shows. 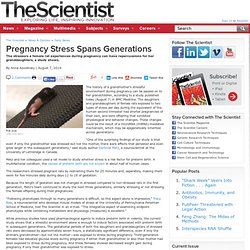 Rat pupGERLINDE METZ The history of a grandmother’s stressful environment during pregnancy can be passed on to her grandchildren, according to a study published today (August 7) in BMC Medicine. The daughters and granddaughters of female rats exposed to two types of stress per day during the equivalent of the human second trimester had shorter pregnancies of their own, and bore offspring that exhibited physiological and behavior changes. Why People (Incorrectly) Think They Are Not Creative.

A General Writes the First After-Action Report on the Wars in Afghanistan and Iraq: Why We Lost. Former Defense Secretary Robert Gates’ book sparked a firestorm upon its release in January, although you would never have predicted it by its humdrum title: Duty. 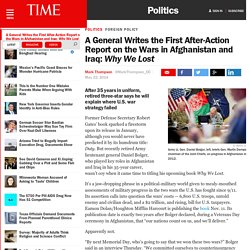 But recently retired Army lieutenant general Daniel Bolger, who played key roles in Afghanistan and Iraq in his 35-year career, wasn’t coy when it came time to titling his upcoming book Why We Lost. Experimental Epistemology Research Group. Criminal investigation in England. In the previous lecture I talked about policing in general. 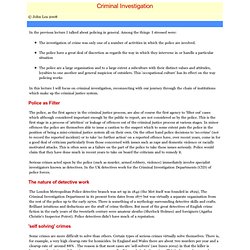 Among the things I stressed were: The investigation of crime was only one of a number of activities in which the police are involved. The police have a great deal of discretion as regards the way in which they intervene in or handle a particular situation The police are a large organisation and to a large extent a subculture with their distinct values and attitudes, loyalties to one another and general suspicion of outsiders. This 'occupational culture' has its effect on the way policing works In this lecture I will focus on criminal investigation, reconnecting with our journey through the chain of institutions which make up the criminal justice system. Police as Filter The police, as the first agency in the criminal justice process, are also of course the first agency to 'filter out' cases which although considered important enough by the public to report, are not considered so by the police.

It's Mothers' Day and a woman's thoughts turn to eating her young. So. It turns out Mothers' Day was conceived by a woman who was never a mother herself. Dealing with Irreproducibility. Researchers discuss the growing pressures that are driving increases in retraction rates at AACR. FLICKR, UNIVERSITY OF EXETERRecent years have seen increasing numbers of retractions, higher rates of misconduct and fraud, and general problems of data irreproducibility, spurring the National Institutes of Health (NIH) and others to launch initiatives to improve the quality of research results.

Yesterday (April 7), at this year’s American Association for Cancer Research (AACR) meeting, researchers gathered in San Diego, California, to discuss why these problems to come to a head—and how to fix them. Isaac Asimov on the Thrill of Lifelong Learning, Science vs. Religion, and the Role of Science Fiction in Advancing Society. By Maria Popova “It’s insulting to imply that only a system of rewards and punishments can keep you a decent human being.” Isaac Asimov was an extraordinary mind and spirit — the author of more than 400 science and science fiction books and a tireless advocate of space exploration, he also took great joy in the humanities (and once annotated Lord Byron’s epic poem “Don Juan”), championed humanism over religion, and celebrated the human spirit itself (he even wrote young Carl Sagan fan mail).

“A new scientific truth does not triumph by convincing its opponents and making them see the light, but rather because its opponents eventually die…” Thomas Kuhn quoting Max Planck. Science is about Ideas – ideas that stick. Well, perhaps that should be the history of science is about ideas. Problems with scientific research: How science goes wrong. What If Everything You Were Ever Taught Was A Lie? Wall. Dvdp. Animated Gifs. An artist known only as Rrrrrrrroll will leave you spinning with some gif art that works hard to put the art in the gif genre.

The new digital customer journey: Cross-channel, mobile, social, self-service, and engaged. Businesses planning today to improve their connection to customers in digital channels are increasingly looking at the discipline of mapping out what's being called the 'customer journey'. Over the last ten years, the fragmentation of customer engagement across dozens of channels has turned into both a highly vexing problem and an increasingly disruptive challenge to businesses that still keep doing what used to work, but are getting sharply falling off results from old touchpoints like TV, phone, and e-mail. This fragmentation of customer touchpoints cuts across marketing, sales, customer service, and even product development. In short, customers have moved to the digital world en masse , and companies have not kept up. Yes, it's true that most businesses currently realize they need to evolve. Yet the historical vagaries of how companies have applied technology to the customer relationship has meant that solutions have long been channel-centric, instead of customer-centric.

Sacred Texts: Ancient Egypt. Jonathan Drori on what we think we know. The Unicist Approach to Marketing. Science-fiction classics that have rewired your brain - Image 3. Time to turn on the tardis at Birmingham Science City. Life and Time. Science Fiction and Philosophy: From Time Travel to Superintelligence. Scientific Method: Relationships Among Scientific Paradigms.