ZipperSwitch - ZenSwitch Freestyle Drill TI Coach Gadi Total Immersion שחייה. TI Swimmer Yoram 10 Strokes Freestyle 25M. SwimVICE with Coach Mandy: Freestyle Recovery Arm and Swimming Quiet! Swimming Made Easy: The Total Immersion Way for Any Swimmer to Achieve ... - Terry Laughlin - Google Books. Exhaling—The Hidden Secret to Swimming Farther and Faster. Why breathing out is just as important as breathing in Even before the development of scientific studies and advanced laboratories for metabolic analysis, swimmers became aware of the following basic facts: Breathing in while your face is underwater is NOT the best respiratory strategy, andAir is absolutely necessary if you’re planning to swim more than about 50 yards. 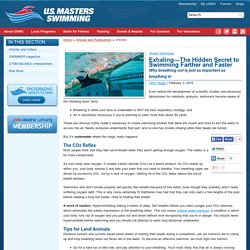 These two obvious truths made it necessary to create swimming strokes that allow the mouth and nose to exit the water to access the air. Nearly everyone understands that part, and no one has trouble inhaling while their heads are turned. But it’s underwater where the magic really happens. The CO2 Reflex Most people think that they feel out-of-breath when they aren’t getting enough oxygen. As your body uses oxygen, it creates carbon dioxide (CO2) as a waste product. Swimmers who don’t exhale properly will quickly feel winded because of this reflex, even though they probably aren’t really suffering oxygen debt. All About The Freestyle Leg Kick - inc front crawl kicking drills to improve your kicking technique. Leg kick technique is often misunderstood by swimmers and triathletes Triathletes - You're Not Looking For Propulsion Our swimming animation Mr Smooth demonstrates an effective 6-beat kick. 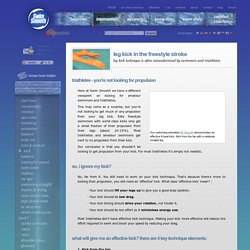 Kick from the hip with a relatively straight leg. Here at Swim Smooth we have a different viewpoint on kicking for amateur swimmers and triathletes. This may come as a surprise, but you're not looking to get much or any propulsion from your leg kick. Our conclusion is that you shouldn't be looking to get propulsion from your kick. So, I ignore my kick? No, far from it. How To Swim Freestyle by Shinji Takeuchi - Acceleration. 2 Beat Kick and Effective Propulsion Demo/Analysis. The 4 Phases Of The Freestyle Swim Stroke. For pro triathlete and swim coach Anna Cleaver, swim insight is a sixth sense—she grew up in the waves of her native New Zealand and today is first out of the water at most any race she enters. 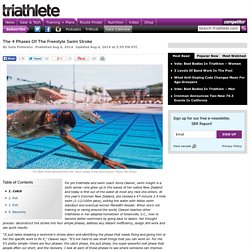 At this year’s Ironman New Zealand, she clocked a 47-minute 2.4-mile swim (1:12/100m pace), exiting the water with fellow swim standout and eventual winner Meredith Kessler. When she’s not training or racing around the world, Cleaver teaches other triathletes in her adopted hometown of Greenville, S.C., how to become better swimmers by going back to basics. Her thought process: deconstruct the stroke into four simple phases, address any blatant inefficiency, assign drill work and see quick results. “It just takes breaking a swimmer’s stroke down and identifying the phase that needs fixing and giving him or her the specific work to fix it,” Cleaver says.

“It’s not hard to see small things that you can work on. What you’re doing wrong: Over-reaching, crossing over. Front crawl. Swimmer breathing during front crawl The front crawl or forward crawl is a swimming stroke usually regarded as the fastest of the four front primary strokes.[1] As such, the front crawl stroke is nearly universally used during a freestyle swimming competition, hence freestyle is used metonymically for the front crawl. 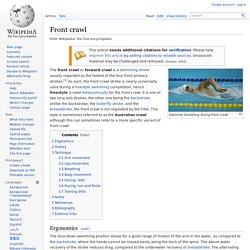 It is one of two long axis strokes, the other one being the backstroke. Unlike the backstroke, the butterfly stroke, and the breaststroke, the front crawl is not regulated by the FINA. Grant Hackett Front Crawl Technique. Alexander Popov swimming technique. The Most Common Freestyle/Front Crawl Errors I see at all levels and what can be done to correct them. : Swimming. Front Crawl Stroke Lessons,Freestyle Swimming Technique,Learn to Swim Online Tips. The Front crawl is commonly regarded as the fastest swimming style (also known as Freestyle). 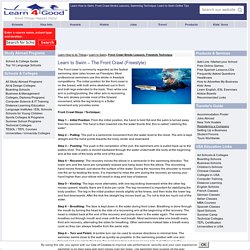 Most professional swimmers use this stroke in freestyle competitions. The initial position for the front crawl is on the breast, with both arms stretched out in front and both legs extended to the back. Then while one arm is pulling/pushing, the other arm is recovering. Freestyle Catch and Feel For The Water. The High-Elbow Pull Of The Freestyle Stroke.

One of the most difficult swimming concepts to understand is why one should pull with the elbows near the surface, also referred to as “high-elbow pull” or the early vertical forearm position (EVF). 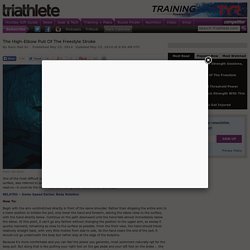 If you’re not familiar, read on—it could be the most important change you make in your technique. Freestyle - Relax and Feel. All Strokes - Trailing-Hands Sculling. Kicking is not only for propulsion. Good article, and some of the points in the article are quite interesting, but I think you need to put them in context of the swim technique you're using. 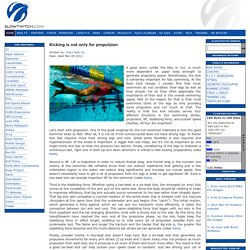 I've recently started using the Total Immersion system, and can say from first hand experience that I no longer need my legs to provide lift. Lift in the water comes from being properly balanced. I also find that inertia isn't a concern anymore, because as you improve your hydrodynamics you greatly reduce the amount of energy you need to put in to reduce drag.

In fact, because of the turbulence generated by a flutter kick, I find it hurts my inertia. A 2-beat kick creates almost no turbulence, while providing enough propulsion (or rather, allowing the body to create propulsion by rolling) to keep me moving forward. But it's different strokes for different folks. TI Kona Camp- Terry Laughlin discusses propulsion and positioning. Total ImmersionTotal Immersion. After seven years of teaching TI Freestyle Workshops, I’ve learned I can nearly always recognize those swimmers who have prepared for the workshop by practicing with the guidance of the TI Easy Freestyle DVD. 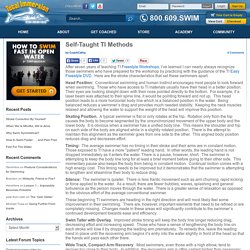 Here are the stroke characteristics that set these swimmers apart: Head Position: Conventional swimming and human instinct encourages most people to look forward when swimming. Those who have access to TI materials usually have their head in a better position. Their eyes are looking straight down with their nose pointed directly to the bottom. For example, if a laser beam was attached to their spine line, it would be pointing forward and not up. Skating Position. Timing: The average swimmer has no timing in their stroke and their arms are in constant motion.

Traditional swim coaching taught everyone to swim with a flutter kick: The legs are kept nearly straight with only a subtle bending of the knee and pointed toes behind the swimmer. 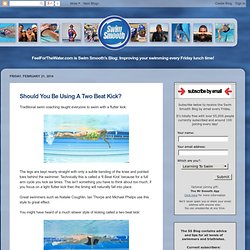 Technically this is called a '6 Beat Kick' because for a full arm cycle you kick six times. This isn't something you have to think about too much, if you focus on a light flutter kick then the timing will naturally fall into place. Great swimmers such as Natalie Coughlin, Ian Thorpe and Michael Phelps use this style to great effect. You might have heard of a much slower style of kicking called a two beat kick: For a full arm cycle, the swimmer kicks twice. The advantage of this kicking style is that it uses less energy and so can be more energy efficient over longer distances. 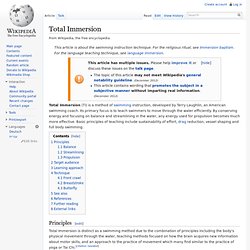 [citation needed] Balance[edit] Total Immersion focuses on a handful of core principles that apply to any body moving through a fluid medium whether it be a boat, a submarine, an aquatic mammal or a fish. It emphasizes greater efficiency and lowered resistance by teaching drills and focal points that keep the swimmer's hips near the surface, reducing the drag profile of the body. Streamlining[edit] Common Freestyle Breathing Mistakes - SWIMMER Magazine. Freestyle swimming technique: tips to improve your speed. Whether you are a master swimmer trying to get some seconds off your freestyle record or you just want to get better at swimming, go on reading.

The Most Graceful Freestyle Swimming by Shinji Takeuchi.