Vodafone Becomes a Part of Via Licensing's Consortium. Via Licensing’s Consortium’s LTE Patent pool is a holistic platform in itself which drives all innovators of vital LTE patents towards a single offering. 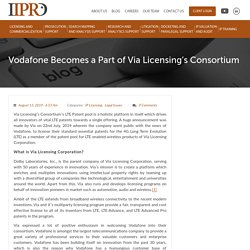 Via’s mission is to create a platform which enriches and multiplies innovations using intellectual property rights by teaming up with a diversified group of companies like technological, entertainment and universities around the world. Apart from this, Via also runs and develops licensing programs on behalf of innovation pioneers in market such as automotive, audio and wireless.[1] What Should Be Your Key Considerations While Licensing From Patent Pledges? Toyota, a Japanese MNC recently decided to grant approximately 24,000 ‘vehicle electrification’ patent licenses on the technologies used by them in making of their cars, specifically in “green” cars i.e. 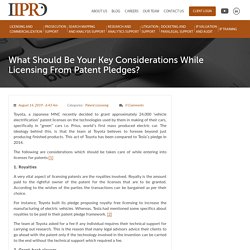 Prius, world’s first mass produced electric car. The ideology behind this, is that the team at Toyota believes to foresee beyond just producing finished products. This act of Toyota has been compared to Tesla’s pledge in 2014. The following are considerations which should be taken care of while entering into licenses for patents:[1] 1. Untitled — Patent Prosecution in India – Restoration of...

Asian Innovation Surge. Patents have an incorrect notion of secrecy attached to them. 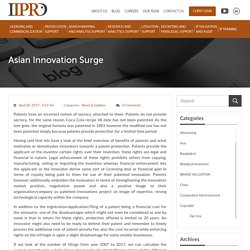 Patents do not provide secrecy, for the same reason Coca Cola recipe till date has not been patented. As the lore goes, the original formula was patented in 1893 however the modified one has not been patented simply because patents provide protection for a limited time period. Having said that lets have a look at the brief overview of benefits of patents and what motivates or demotivates innovators towards a patent protection. Patents provide the applicant or the inventor certain rights over their invention, these rights are legal and financial in nature.

Legal enforcement of these rights prohibits others from copying, manufacturing, selling or importing the invention whereas financial enforcement lets the applicant or the innovator derive some sort of Licensing deal or financial gain in terms of royalty being paid to them for use of their patented innovation. References: [1] [2] [3] Patent Wars And Frand Licensing by iiprd. The smartphone industry nowadays is branded by a myriad of patents and its litigations in terms of infringement. 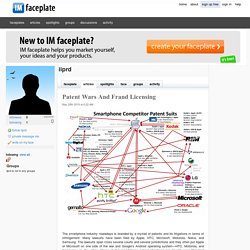 Many lawsuits have been filed by Apple, HTC, Microsoft, Motorola, Nokia, and Samsung. The lawsuits span cross several courts and several jurisdictions and they often put Apple or Microsoft on one side of the war and Google’s Android operating system—HTC, Motorola, and Samsung—on the other. Many of the smartphone patent litigations are fought over Standard Essential Patents Standards are central in development interoperability, and are normally set by standard-setting organizations (“SSOs” :These organizations works mainly on the use of standards in the making of goods and services that are safe, reliable and of good quality.

The standards help trade, increase efficiency while lessening errors and waste. like International Organization for Standardization. These technologies are classified as SEP (standard essential patents). “Image Trademark”- The Evolving Concept in IPR Jurisprudence. Online Music Licensing in India (PLUS) and How is this a revolutionary change? Intellectual Property Protection in Software Industry. The computer was born not out of a need to solve a serious number-crunching crisis.[1] By 1880, the U.S. population had risen so much that it took more than seven years to tabulate the U.S. 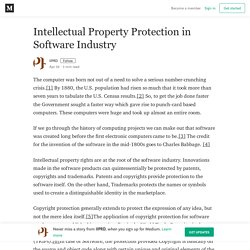 Census results.[2] So, to get the job done faster the Government sought a faster way which gave rise to punch-card based computers. These computers were huge and took up almost an entire room. If we go through the history of computing projects we can make out that software was created long before the first electronic computers came to be.[3] The credit for the invention of the software in the mid-1800s goes to Charles Babbage. [4] Intellectual property rights are at the root of the software industry.

Innovations made in the software products can quintessentially be protected by patents, copyrights and trademarks. Section 2 (o)[7] defines ‘literary work’ which includes “computer programs, tables and compilations including computer databases.” Patent Licensing. Patent Licensing. What is Patent Licensing? 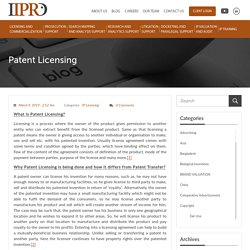 Licensing is a process where the owner of the product gives permission to another entity who can extract benefit from the licensed product. Same as that licensing a patent means the owner is giving access to another individual or organisation to make, use and sell etc. with his patented invention. Usually license agreement comes with some terms and condition agreed by the parties, which have binding effect on them. Patent Agent Exam Study Material Available At IIPRD. Who is a Patent Agent: A Patent Agent is a Legal Counsellor who advises its Clients on how to their Intellectual Property (IP), Patents in particular. 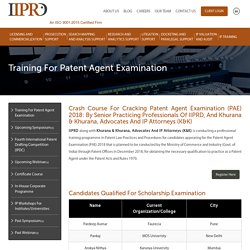