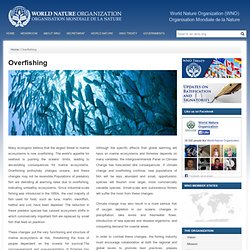 The world’s appetite for seafood is pushing the oceans’ limits, leading to devastating consequences for marine ecosystems. Overfishing profoundly changes oceans, and these changes may not be reversible.Populations of predatory fish are dwindling at alarming rates due to overfishing, indicating unhealthy ecosystems. Since industrial-scale fishing was introduced in the 1950s, the vast majority of fish used for food, such as tuna, marlin, swordfish, halibut and cod, have been depleted. The reduction in these predator species has caused ecosystem shifts in which commercially important fish are replaced by small fish that feed on plankton. Climate change exacerbates the stress already experienced by marine stocks. Snowball effect of overfishing highlighted. Florida State University researchers have spearheaded a major review of fisheries research that examines the domino effect that occurs when too many fish are harvested from one habitat. 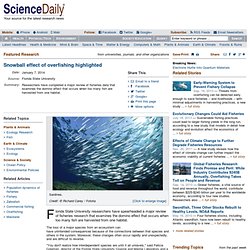 The loss of a major species from an ecosystem can have unintended consequences because of the connections between that species and others in the system. Moreover, these changes often occur rapidly and unexpectedly, and are difficult to reverse. "You don't realize how interdependent species are until it all unravels," said Felicia Coleman, director of the Florida State University Coastal and Marine Laboratory and a co-author on the study. Threats: Overfishing. Publication - April 8, 2008 One of the biggest threats to marine ecosystems today is overfishing. 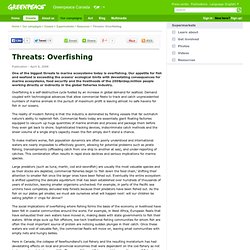 Our appetite for fish and seafood is exceeding the oceans’ ecological limits with devastating consequences for marine ecosystems, food security and the livelihoods of the 200&nbsp;million people working directly or indirectly in the global fisheries industry. Overfishing is a self-destructive cycle fuelled by an increase in global demand for seafood. Demand coupled with technological advances that allow commercial fleets to track and catch unprecedented numbers of marine animals in the pursuit of maximum profit is leaving almost no safe havens for fish in our oceans. The reality of modern fishing is that the industry is dominated by fishing vessels that far outmatch nature’s ability to replenish fish. Economic Costs of Historic Overfishing on Recreational Fisheries: South Atlantic & Gulf of Mexico Regions. 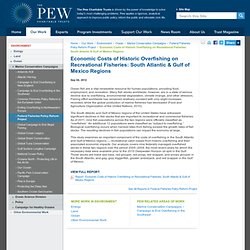 Many fish stocks worldwide, however, are in a state of serious decline due to overfishing, environmental degradation, climate change, and other stressors. Study: Overfishing has cost millions. PENSACOLA, Fla. -- The Gulf of Mexico's recreational fishing industry has lost millions of dollars in recent years because of overfishing, a study from a national environmental group says. 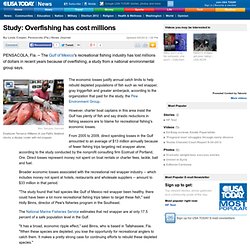 The economic losses justify annual catch limits to help rebuild depleted populations of fish such as red snapper, gray triggerfish and greater amberjack, according to the organization that paid for the study, the Pew Environment Group. Economic and Social Effects - Portland State University. Southeast Suffered Millions in Economic Losses from Overfishing. Orlando, Fla. 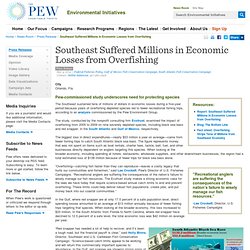 Resources: Pew-commissioned study underscores need for protecting species The Southeast sustained tens of millions of dollars in economic losses during a five-year period because years of overfishing depleted species led to fewer recreational fishing trips, according to an analysis commissioned by the Pew Environment Group. The study, conducted by the nonprofit consulting firm Ecotrust, examined the impact of overfishing from 2005 to 2009 on nine severely depleted species, including black sea bass and red snapper, in the South Atlantic and Gulf of Mexico, respectively. The biggest loss in direct expenditures—nearly $53 million a year on average—came from fewer fishing trips to catch South Atlantic black sea bass. "Recreational anglers are suffering the consequences of the nation's failure to wisely manage our fish resources. 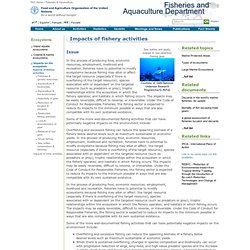 Related Writings. The Effects of Overfishing on Marine Biodiversity by Mercedes Lee and Carl Safina. 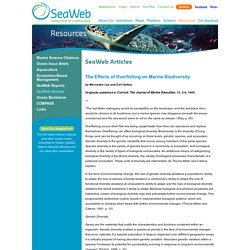 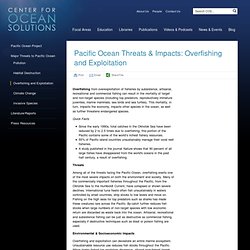 This mortality, in turn, impacts the economy, impacts other species in the ocean, as well as further threatens endangered species. Quick Facts Since the early 1990s, total catches in the Okhotsk Sea have been reduced by 2 to 2.5 times due to overfishing; this portion of the Pacific contains some of the world’s richest fishery resources.55% of Pacific island countries unsustainably manage their coral reef fisheries.A study published in the journal Nature shows that 90 percent of all large fishes have disappeared from the world's oceans in the past half century, a result of overfishing.

The Threats of Overfishing: Consequences at the Commercial Level. According to marine ecologists, overfishing is the greatest threat to ocean ecosystems today (1). 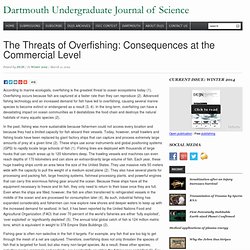 Overfishing occurs because fish are captured at a faster rate than they can reproduce (2). Advanced fishing technology and an increased demand for fish have led to overfishing, causing several marine species to become extinct or endangered as a result (3, 4). In the long-term, overfishing can have a devastating impact on ocean communities as it destabilizes the food chain and destroys the natural habitats of many aquatic species (2). In the past, fishing was more sustainable because fishermen could not access every location and because they had a limited capacity for fish aboard their vessels. Today, however, small trawlers and fishing boats have been replaced by giant factory ships that can capture and process extremely large amounts of prey at a given time (2).

Fishing gear is often non-selective in the fish it targets. Many modern fishing methods are also irreversibly destructive. 1. 2. RJ Dunlap Marine Conservation Program. Overfishing is among the greatest threats facing marine biodiversity. Many species of top ocean predators, such as billfish, tunas and sharks, are experiencing unprecedented population declines worldwide. Sharks are among the most threatened marine animals worldwide. Recent estimates suggest that populations of many large sharks have declined by 90% or more in areas where they were once abundant. We are conducting a series of integrated field and laboratory studies in the Florida Keys to understand the ecosystem role of marine predators and the potential cascading effects of their declines on fish communities.

This work will provide insights for predicting how both predators and prey are likely to respond to overfishing with implications for developing effective conservation and management strategies. Figure 1 (above): Predator-prey interactions between bull sharks and Atlantic tarpon in the southern Florida ecosystem. Figure 2 (above): Evidence of a bull shark attacking a tarpon. Overfishing. If global overfishing continues, wild fish populations will be further reduced, regardless of how many boats are used or what techniques are employed. Today, most of the world’s major commercially valuable fish populations are overfished , and the remainder is exploited at their maximum possible level.

(National Oceanic Atmospheric Administration) In 1999, the United Nations Food and Agriculture Organization estimated that 70-78% of worldwide marine fish stocks require urgent intervention to prevent population declines and to help rebuild species depleted by over fishing. In the waters surrounding the United States, the U.S. Department of Commerce listed 959 different fish stocks in the 2001 Annual Report to Congress on the Status of U.S. Fisheries. The wild fish in our oceans are the last wild creatures that people hunt on a global scale. Overfishing Means Marine Animals Are Starving: Report. More fisheries are relying on smaller prey fish such as anchoveta - with more than 10.7 million metric tons pulled in, depriving seabirds and other marine animals of food (FAO "Ten Biggest Fisheries in the World" 2006) It seems that humanity's voracious appetite for fish — be it wild or farmed — is depleting the ocean so much of its smaller "prey fish" and krill that marine predators, such as dolphins, seals, whales, are facing starvation.

A new report by ocean conservation group Oceana describes how "scrawny predators — dolphins, sea bass and even whales — have turned up on coastlines all over the world", including seabirds "emaciated from lack of food, vulnerable to disease and without enough energy to reproduce". Oceana's "Hungry Oceans" report uses figures from the Food and Agriculture Organization (FAO) which found that since WWII, 88 species of small prey fish (a staple for larger marine animals and seabirds) have become major targets for seven of the 10 top fishing fleets.

Sustainable Fisheries. 32% of the world's fisheries are overexploited, depleted or recovering, which threatens the health, economy, and livelihoods of communities all over the world. The global fishing fleet is estimated to be 250% larger than needed to catch what the ocean can sustainably produce » Demand for fish hits record high - UN report shows that the global consumption of fish hits a record high, while the status of the world's fish stocks have not improved.

[The State of World Fisheries and Aquaculture 2010 UN report ] » Aquacalypse Now - The End of Fish There are a number of issues that need to be addressed quickly in order to preserve fish stocks as a natural resource. Overfishing threatens world food supplies, warns Global Ocean Commission. By Lewis Smith March 19 2014 Lewis Smith Failure to protect the seas from overfishing threatens to have a “significant impact” on food security, the Global Ocean Commission has warned.

Overfishing: a threat to marine biodiversity. Overfishing: a threat to marine biodiversity. Evidence of unsustainable fishing in the Great Barrier Reef. Environmental impact. Fishing has an impact on our marine environment, and it's not just fish stocks that are affected. Sensitive habitats, endangered species and the marine food chain need to be maintained to keep the oceans healthy and productive. Impact of Unsustainable Fishing Practices on Sea Bed and Ocean Productivity. Destructive Fishing Practices. Page - February 22, 2008 Ancient forests in danger ... deep under the ocean. Biologists estimate that somewhere between 500,000 and 5,000,000 marine species have yet to be discovered. Unsustainable fishing. As coastal and pelagic (open ocean) fisheries around the world have collapsed, fishing effort has shifted to the deep sea and previously unexploited fish species. Here, overfishing can quickly deplete local fish populations - even within a single season.

Fleet Overcapacity is Driving Overfishing. Summary We call on MEPs to: EU waters are already overfished. Why would we spend €1.6bn on new boats? July 4, 2013 // By: Griffin Carpenter Recent progress on sustainable fishing is now in danger as MEPs vote next week on the European Maritime and Fisheries Fund (EMFF) – the money used to implement the new Common Fisheries Policy. One key amendment to the EMFF would allow for €0.24 billion annually - a total of €1.6 billion over seven years - to be spent on new vessel construction for certain fleets. Measuring and assessing capacity in fisheries. 1. Basic concepts and management options. While excess capacity is often most apparent in a fishery as it is easiest to identify, the fundamental issue for capacity management involves overcapacity. Excess capacity may be an indicator of overcapacity, or may exist for other reasons.

In some cases, for example when strict effort controls are imposed on a temporary basis to allow stocks to recover, excess capacity may be a necessary by-product of effective management. Tackling fleet overcapacity - policy briefing. Publication - April 1, 2012. The Fisheries Secretariat.