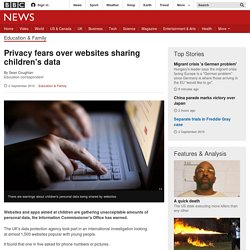 The UK's data protection agency took part in an international investigation looking at almost 1,500 websites popular with young people. It found that one in five asked for phone numbers or pictures. "These are concerning results," said Adam Stevens, head of the ICO's intelligence hub. The investigation looked at how websites were harvesting large amounts of personal information, with half sharing children's data with third parties. The research, co-ordinated by the Global Privacy Enforcement Network, an international umbrella group for privacy regulators, found concerns with 41% of the websites examined.

There were 50 UK-based websites among those investigated. The study has not identified the names of the websites and apps, but Mr Stevens said they would be contacted and action could be taken against them to enforce changes. Campaign calls for children's 'right to be forgotten' - BBC News. A campaign has launched to promote the idea that children should be able to delete their online past. 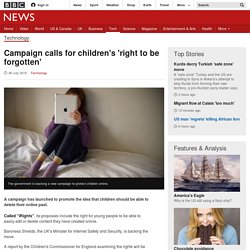 Called "iRights", its proposals include the right for young people to be able to easily edit or delete content they have created online. Baroness Shields, the UK's Minister for Internet Safety and Security, is backing the move. A report by the Children's Commissioner for England examining the rights will be published by the end of the year. The iRights framework is intended to inspire businesses to work with the government on better protecting and empowering young people in terms of their online activity. As well as supporting children's "right to be forgotten", iRights says young people have a right to digital literacy and should be well informed about how their data might be used. A host of companies and charities, including Barclays bank, the NSPCC and law firm Schillings, have signed up to the campaign. 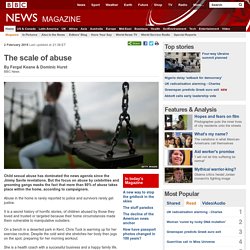 But the focus on abuse by celebrities and grooming gangs masks the fact that more than 80% of abuse takes place within the home, according to campaigners. Abuse in the home is rarely reported to police and survivors rarely get justice. Twitter. Internet safety film: The Anti-Social Network. Online Child Abuse Images 'Should Leave Us All Feeling A Little Guilty,' NSPCC Chief Says.

We should all feel "guilty" so long as there are still child abuse images on the internet, the head of the NSPCC said. 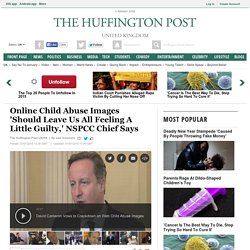 Peter Wanless called for the removal of all such pictures but admitted it would be a "gargantuan task" said "every one of us should feel at least a little guilty" while the problem persists. Last month, David Cameron told a child abuse summit that a joint specialist unit run by the National Crime Agency and listening post GCHQ will target the most prolific offenders who are using increasingly sophisticated techniques to hide their true identities and encrypt and share images online. SEE ALSO: Made A Dame - Despite Having To Resign As Child Abuse Inquiry Lead Child Grooming 'Happening Right Across The Country' Call To Reinvestigate 'Suspicious Deaths' Of Child Abuse Whistleblowers Writing in the Daily Mirror, Mr Wanless described the campaign against sexual abuse of children as "one of the biggest challenges facing society". 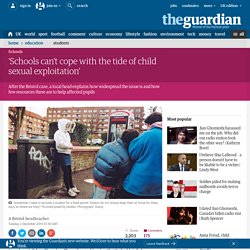 The police and local authority had briefed secondary headteachers twice in preparation this term. MP says schools are failing on cyberbullying. 16 November 2014Last updated at 20:18 ET By Liam Blyth & Gary Butcher BBC Radio 5 live Breakfast Convicted troll Isabella Sorley met college students to warn them of the dangers of online abuse The chairman of the Commons education select committee says schools in England are failing in their efforts to teach children about the dangers of online abuse and trolling. 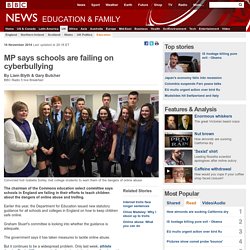 Earlier this year, the Department for Education issued new statutory guidance for all schools and colleges in England on how to keep children safe online. Google urged to change privacy rules by data regulators. 26 September 2014Last updated at 11:30 ET Google's changes to its privacy policies in March 2012 concerned many European data regulators European data privacy regulators have put renewed pressure on Google to alter its privacy policy. 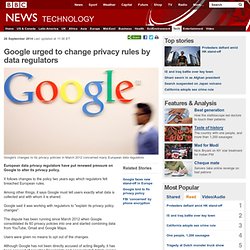 It follows changes to the policy two years ago which regulators felt breached European rules. Techie teens shaping communications. 06 August 2014 A 'millennium generation' of 14 and 15 year olds are the most technology-savvy in the UK, according to new Ofcom research, which shows that after our teens our digital confidence begins a long decline. 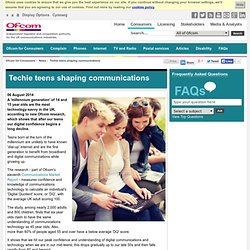 Teens born at the turn of the millennium are unlikely to have known 'dial-up' internet and are the first generation to benefit from broadband and digital communications while growing up. Youth Advice - Internet Privacy and Personal Data. Welcome to the Information Commissioner's Office (ICO) pages for young people – aimed at helping you protect your personal information. 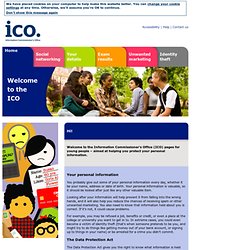 Your personal information You probably give out some of your personal information every day, whether it be your name, address or date of birth. Your personal information is valuable, so it should be looked after just like any other valuable item. Looking after your information will help prevent it from falling into the wrong hands, and it will also help you reduce the chances of receiving spam or other unwanted marketing. News-from-UK-Safer-Internet-Centre. We can now reveal that the theme of Safer Internet Day, 10 February 2015 will be again Let's create a better internet together. 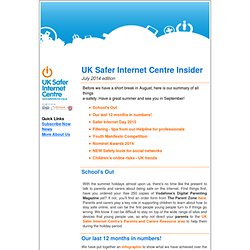 As we are starting to talk more often about a 'better' internet, not just a 'safer' internet we feel this theme lends a great opprtunity to look at how different stakeholders can contribute and have a role to play in creating a better internet. We'd love you to get involved in Safer Internet Day - as a school, youth organisation, service provider or company by: Parents rely too much on schools to teach online safety, say teachers. Nearly two thirds of teachers told online security company AVG that they have not been formally trained to teach their pupils internet safety, while 85 per cent of the 1,800 person sample said the topic should be a dedicated part of the education syllabus. Nearly two fifths of teachers, from countries including Australia, Brazil, Canada, the UK and New Zealand, said they had been approached by pupils concerned by internet safety issues, while over a quarter had spoken to students worried about cyberbullying.

When approached for advice on varies online safety issues, 28 per cent of the teachers questioned, on average, felt they were ‘insufficiently equipped’ or ‘not equipped at all’ to handle the issue. While 91 per cent of UK teachers indicated their school offered IT classes, compared to around 72 per cent globally, only 37 per cent of teachers had formal training in online safety. How do we keep our children safe online? The jury is out on whether family-friendly internet filters – which are being offered to virtually all households in Britain from later this year – will be a breakthrough in helping parents feel in control of their children's online activities. But whether they prove a popular tool or not, the consensus at a Guardian roundtable discussion was that filters could only be part of the solution to keeping children safe online.

Education, for children and their parents, was seen as the pressing need by many participants in the Virgin Media-sponsored discussion, entitled "Switched on families: Does the online world make good things happen? " "We've got a generation of parents who simply don't know what it takes to raise a child in the digital age," said Vicki Shotbolt, CEO and founder of the Parent Zone. "When you talk to them they say they have no idea what it takes to get it right. " Sea-change in attitude Several participants questioned whether family-friendly filters would work in practice.

The flap over Talking Angela the chatbot app. If you’re a parent, you know how little kids often want to be like their older sibs and other “big kids” they look up to. And that goes for technology too, of course. Enter Talking Angela, an iPhone and Android app designed for teens (and the teenager in all of us) but not for little kids. Though I can see why little ones would find Angela the talking cat fascinating. Yesterday morning I found myself having two conversations about “Angela,” one with a Net safety expert in the UK via Skype and the other with one in Mexico via email. They had both gotten calls from parents about a hoax about Talking Angela that had been circulating on Facebook and in the news media in their respective countries – a hoax that associated the app with a “pedophile ring” but that has also been “fully repudiated,” CNET reports. 57 million+ downloads so far.

Pupils see more online porn, a teachers' union warns. 10 February 2014Last updated at 13:30 GMT By Patrick Howse BBC News, Education reporter Pupils have easy access to pornography on mobile devices, the ATL says. SID Relay. Booklet about involving young people in Social Networks - Essential read for schools thinking of using Facebook etc. A few people have asked be recently for copies of the Social Media Youth Participation in Local Democracy resource I worked on with LGIU out of a practitioners action learning set last year. You can get hold of a print copy from the LGIU direct, or a PDF is available for download below or for viewing on Scribd. The guide contains four sections: