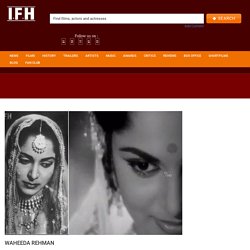 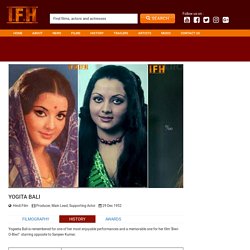 Yogeeta Bali is remembered for one of her most enjoyable performances and a memorable one for her film ‘Biwi-O-Biwi” starring opposite to Sanjeev Kumar. She retired from films permanently after she married Mithun Chakraborty to start a family. Latest News. Sanjay Dutt was seen at Taj Mahal in Agra celebrating his wedding anniversary with his family. 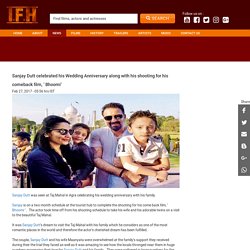 Sanjay is on a two month schedule at the tourist hub to complete the shooting for his come back film, ‘ Bhoomi ’ . Latest News. Bollywood megastars Amitabh Bachchan, Varun Dhawan and Alia Bhatt walked the ramp for the 12th edition of the ‘ Caring with style’ fashion show held in Mumbai in an event held in aid of cancer patients by the Cancer Patients Aid Association ( CPAA) . 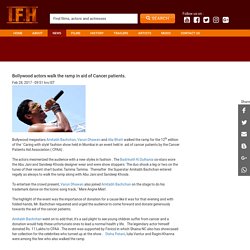 The actors mesmerized the audience with a new styles in fashion . The Badrinath Ki Dulhania co-stars wore the Abu Jani and Sandeep Khosla designer wear and were show stoppers. Latest News. Vikramaditya Motwane says he decided to make Trapped because he wanted to take a risk as a filmmaker and did not want to confine his directorial abilities. 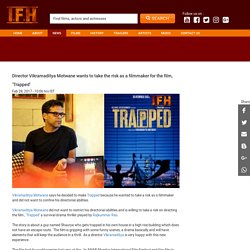 Vikramaditya Motwane did not want to restrict his directorial abilities and is willing to take a risk on directing the film , ‘Trapped’ a survival drama thriller played by Rajkummar Rao. Latest News. The trailer of Phillauri has been released on the screens in the theatre and the background score of the music is quite captivating . 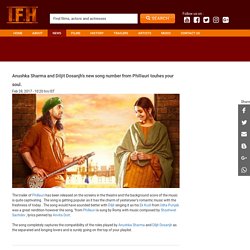 The song is getting popular as it has the charm of yesteryear’s romantic music with the freshness of today . The song would have sounded better with Diljit singing it as his Ek Kudi from Udta Punjab was a great rendition however the song, ‘from Phillauri is sung by Romy with music composed by Shashwat Sachdev , lyrics penned by Anvita Dutt. Latest News. Shah Rukh Khan is a speaker who can turn around any dull ceremony into one of the most interesting evenings with his eloquence and his great sense of humor, his wit that he is so popular that it has kind of become his middle name. ! 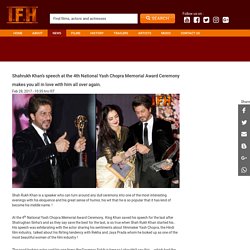 At the 4th National Yash Chopra Memorial Award Ceremony, King Khan saved his speech for the last after Shatrughan Sinha’s and as they say save the best for the last, is so true when Shah Rukh Khan started his.. Latest News. Shraddha Kapoor scored over Alia Bhatt to be the leading heroine in Aamir’s new venture, Thugs of Hindostan.! 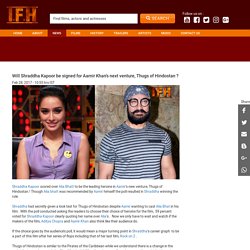 Though Alia bhatt was recommended by Aamir himself the poll resulted in Shraddha winning the role. Shraddha had secretly given a look test for Thugs of Hindostan despite Aamir wanting to cast Alia Bhat in his film. With the poll conducted asking the readers to choose their choice of heroine for the film, 59 percent voted for Shraddha Kapoor clearly quoting her name over Alia’s . Now we only have to wait and watch if the makers of the film, Aditya Chopra and Aamir Khan also think like their audience do. If the choice goes by the audience’s poll, it would mean a major turning point in Shraddha’s career graph to be a part of this film after her series of flops including that of her last film, Rock on 2 . Latest News. Latest News. Latest News. Manjari Fadnnis is excited to travel extensively to promote the film, ‘Jeena Isi Ka Naam Hai’ directed by Keshhav Panneriy and is happy with the response . 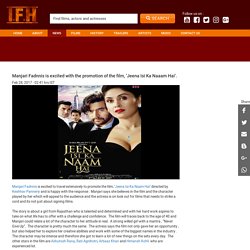 Manjari says she believes in the film and the character played by her which will appeal to the audience and the actress is on look out for films that needs to strike a cord and its not just about signing films. The story is about a girl from Rajasthan who is talented and determined and with her hard work aspires to take on what life has to offer with a challenge and confidence. Latest News. With Alia Bhatt and Varun Dhawan starrer film, Badrinath Ki Dulhania is released it opened up to a lot of discussion and age old genres of films where we see the Women stalker and how Bollywood has been demeaning women since then. 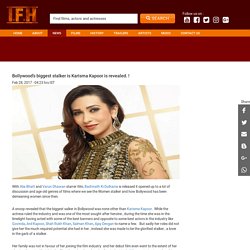 A snoop revealed that the biggest salker in Bollywood was none other than Karisma Kapoor. While the actress ruled the industry and was one of the most sought after heroine , during the time she was in the limelight having acted with some of the best banners and opposite to some best actors in the industry like Govinda, Anil Kapoor, Shah Rukh Khan, Salman Khan, Ajay Devgan to name a few. Latest News.

Imran Khan the chocolate faced hero was one of the most sought after star of Bollywood during his debut in the superhit film, Jaane Tu .. Ya Jaane Na.. he had emerged at being a bigger star than Ranbir Kapoor but the success was short lived In 2017 Imran is directing a film and is looking for a producer and has been meeting a number of producers , right from Atul Kasbekar and a few others but he has not been lucky as yet on finding the right one for his directorial debut.

The actor was last seen in the film, Katti Batti in the lead role. One of the producers whom he approached even suggested to him to change the script which he has obliged. A string of films to name in his career out of which Ek Main Aur Ekk Tu in 2012 received a fair share of success followed by other films that were a series of flops like Matru Ki Bijli Ka Mandola, Once Upon a Time In Mumbai Dobaara!

Latest News. The pretty actress Ayesha Takia Azmi who recently attended the launch of a café in Mumbai with her husband Farhan Azmi was unrecognizable. She had tried to look herself, but with the eye make up with the false lashes and pink lips wearing a smart trendy smart casual outfit . Ayesha has worked on her body and is in the news for getting a lip filler and a boob job done as well. A stark difference is her razor-sharp jawline, lifted cheeks, and a super tonned body that was being noticed while she also carried herself with the spider like eye lashes to give the Oomph look..