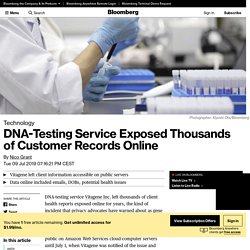 More than 3,000 user files remained accessible to the public on Amazon Web Services cloud-computer servers until July 1, when Vitagene was notified of the issue and shut down external access to the sensitive personal information, according to documents obtained by Bloomberg. The genealogy reports included customers’ full names alongside dates of birth and gene-based health information, such as their likelihood of developing certain medical conditions, a review of the documents showed. Vitagene said that the files dated from when the company was in “beta” testing and represented a small fraction of its customer base. Advocates say consumers may not understand the data privacy policies of at-home genealogy services.

Indefinite retention produces a DNA database that spans the population. - Haw... Most citizens in the UK should expect to be linked to the proposed DNA database. 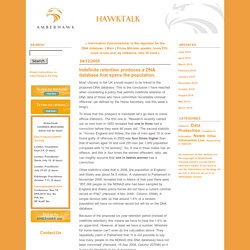 This is the conclusion I have reached when considering a policy that permits indefinite retention of DNA data of those who have committed “recordable criminal offences” (as defined by the Home Secretary, see this week’s blogs). To show that this prospect is inevitable let’s go back to some official statistics. The first one is: “Research recently carried out on men born in 1953 revealed that one in three had a conviction before they were 46 years old”. The second statistic is: “Across England and Wales, the rate of men aged 18 or over found guilty of offences in 2005 was four times higher than that of women aged 18 and over (55 men per 1,000 population compared with 12 for women)”.

So, if one in three males has an offence, and this is four times the women offenders’ ratio, we can roughly assume that one in twelve women has a conviction. Now ask yourself two questions: 23 reasons not to reveal your DNA — The Internet Health Report 2019 — The Int... Industry giants Ancestry.com, 23andMe, MyHeritage and FamilyTreeDNA market their services online, share test results on websites, and even offer tutorials on how to search for relatives in phone directories, or share results in social media. 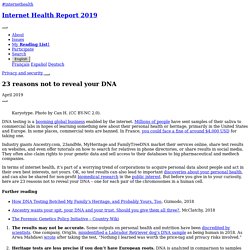 They often also claim rights to your genetic data and sell access to their databases to big pharmaceutical and medtech companies. In terms of internet health, it’s part of a worrying trend of corporations to acquire personal data about people and act in their own best interests, not yours. OK, so test results can also lead to important discoveries about your personal health, and can also be shared for non-profit biomedical research in the public interest.

But before you give in to your curiosity, here are 23 reasons not to reveal your DNA – one for each pair of the chromosomes in a human cell. The results may not be accurate. If you still decide to submit your DNA for testing, the U.S. Don’t buy online DNA ancestry tests. You are the real product. Genealogy website is accused of selling users' DNA data after GSK deal. Genealogy website is accused of selling users' DNA data to pharmaceutical companies after signing a $300million deal with giant GSK 23andme clients send in saliva samples for genetic testing by scientistsThe company has allegedly sold clients' data after to 'big pharma' firm GSKExpert has 'concern' for what companies would do with personal information By Izzy Ferris For The Daily Mail Published: 18:30 EDT, 27 May 2019 | Updated: 07:56 EDT, 5 June 2019 For many it is simply a novel way to find out more about the ancestors. 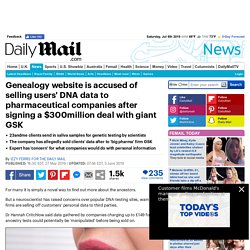 But a neuroscientist has raised concerns over popular DNA-testing sites, warning firms are selling off customers' personal data to third parties. Dr Hannah Critchlow said data gathered by companies charging up to £149 for ancestry tests could potentially be 'manipulated' before being sold on. Healthy-holistic-living. The Right to Know, or not Know, the Data From Medical Research - NewsCentral24x7. A familiar scenario: as part of having your cholesterol checked, your clinician also orders a standard blood panel – a red blood-cell count, and then a breakdown showing the proportions of five types of white blood cells. 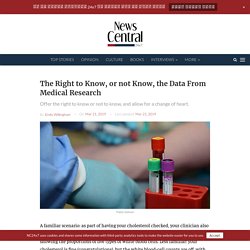 Less familiar: your cholesterol is fine (congratulations), but the white blood-cell counts are off, with values that could mean something fairly mild, such as a viral infection, or point to a serious, potentially fatal problem, such as cancer. Would you want your clinician to tell you about this abnormal finding? If you said ‘yes’, then you are expressing your right to know about the result. If you said ‘no’, then you are expressing the opposite: the right not to know. In most cases, the clinician would tell the patient about such an abnormal finding and discuss it. That’s exactly what’s happened in Iceland. Back when the collection started, deCODE did not get explicit consent from those donating samples to share such information with them. Are you a robot?