Apple Forces Recyclers to Shred All iPhones and MacBooks - Motherboard. Apple released its Environmental Responsibility Report Wednesday, an annual grandstanding effort that the company uses to position itself as a progressive, environmentally friendly company. Behind the scenes, though, the company undermines attempts to prolong the lifespan of its products. Apple's new moonshot plan is to make iPhones and computers entirely out of recycled materials by putting pressure on the recycling industry to innovate.

But documents obtained by Motherboard using Freedom of Information requests show that Apple's current practices prevent recyclers from doing the most environmentally friendly thing they could do: Salvage phones and computers from the scrap heap. Apple pledges to stop mining for iPhone materials. Adeus, mineração: Apple quer passar a usar materiais 100% reciclados na fabricação de seus produtos [atualizado 2x] What would it mean if Apple stopped mining for iPhone materials? Apple hopes that it’ll eventually be able to manufacture iPhones, iPads, Macbooks, and other products using exclusively recycled materials, rather than relying upon mining finite resources. 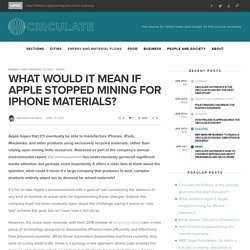 Released as part of the company’s annual environmental report, the announcement has understandably garnered significant media attention, but perhaps more importantly it offers a clear lens to think about the question, what could it mean if a large company that produces hi-tech, complex products entirely wiped out its demand for mined materials? It’s fair to take Apple’s announcement with a grain of salt considering the absence of any kind of timeline or action plan for implementing these changes. Indeed, the company itself has been relatively open about the challenge saying it wants to “one day” achieve the goal, but isn’t sure how it will do so. Perhaps the potential issues really lie with the original question. The Extraordinary Raw Materials in an iPhone 6s. Presented by: Red Cloud Klondike Strike (Equity crowdfunding in mining) Apple launched the first iPhone in 2007, and since then the iconic smartphone has sold over 700 million units around the world. 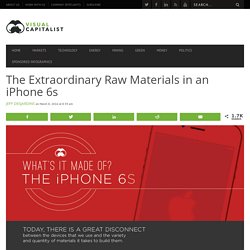 This best-selling handset sets the standard for smartphone performance and features. However, the iPhone would not be possible without the extraordinary raw materials that line the insides of the case.