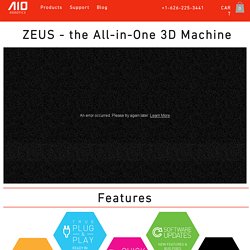 Education of Today Create unique & personalized objects that suit your lifestyle. FunToDo Standard Blend,Industrial Blend and Castable 3D dlp resin. Gizmo 3D Printers and DLP 3D Printers. Gizmo 3D Printers and DLP 3D Printers. MakePrintable - 3D models repair service. HyVISION System. Head to head: Potter versus 3D printer. Ceramics is an ancient, global art form, whose fundamentals have not changed for centuries. 3D printing on the other hand, has only been around for a couple of decades - but has attracted a wave of artists and craftspeople. 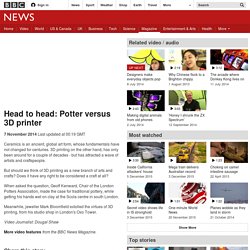 But should we think of 3D printing as a new branch of arts and crafts? Does it have any right to be considered a craft at all? When asked the question, Geoff Kenward, Chair of the London Potters Association, made the case for traditional pottery, while getting his hands wet on clay at the Scola centre in south London. Meanwhile, jeweller Mark Bloomfield extolled the virtues of 3D printing, from his studio shop in London's Oxo Tower. Video Journalist: Dougal Shaw More video features from the BBC News Magazine. Metal Powder Coating - 3Dizingof.com. 3DKITBASH. 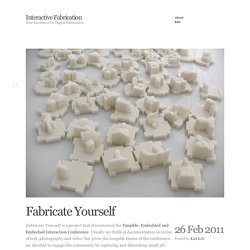 Usually we think of documentation in terms of text, photography and video, but given the tangible theme of the conference we decided to engage the community by capturing and fabricating small 3D models of attendees. This enabled us to build a tangible model of the event and fabricate it piece by piece during the conference. Attendees firstly capture their favorite pose using a Microsoft Kinect. The depth image from the Kinect is processed into a mesh and displayed onscreen in real-time. At any time they can capture the mesh and save it as an STL file. Dovetail joints are automatically added to the side of the models so they can be snapped together. Liverpool John Moores University. SprintRay. Top 10 New 3D Printing Materials You Should Try. The 3D printing industry has been growing rapidly in recent years. 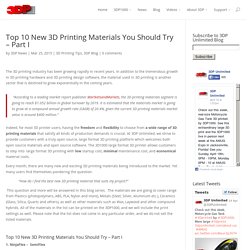 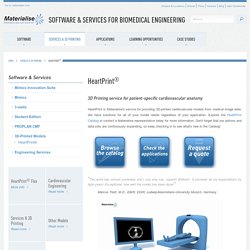 Mimics® Medical is intended for use as a software interface and image segmentation system for the transfer of imaging information from a medical scanner such as a CT scanner or a Magnetic Resonance Imaging scanner. It is also used as pre-operative software for simulating /evaluating surgical treatment options. 3-matic® Medical is intended for use as software for computer assisted design and manufacturing of medical exo- and endo-prostheses, patient-specific medical and dental/orthodontic accessories and dental restorations. 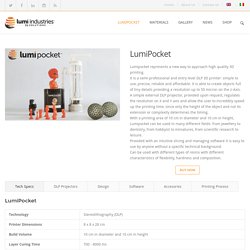 The cylindrical shape of its body is a distinguishing feature among 3D printers which are already available in the market. The body of LumiPocket consists of a see-through plexiglass cover which defines the printer’s shape allowing the eye to investigate how the mechanic components operate. This transparent casing also features our logo, which has been printed with Heliv UV-reactive inks. This striking feature also serves the purpose of getting feedback from the printer. For example, you can tell the printing status just by looking at the printer’s leds integrated in the base. CLIP Technology - Breakthrough technology centered on tunable photochemical process for layerless 3D printing.

Spark 3D Printing Platform. Stratasys. Introduction to 3D Printing: From Design to Fabrication Download the full curriculum guide for grading tools and more detailed information on each unit below. 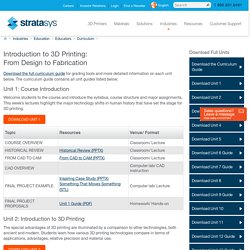 The curriculum guide contains all unit guides listed below. Unit 1: Course Introduction Welcome students to the course and introduce the syllabus, course structure and major assignments. Stratasys helps create San Francisco Skyline. One of Stratasys latest and most advanced 3D printing technologies was recently used to produce the largest ever 3D printed model of the San Francisco skyline. 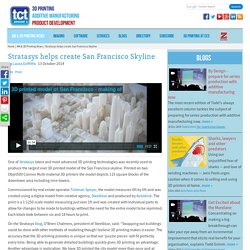 Printed on two Objet500 Connex Multi-material 3D printers the model depicts 115 square blocks of the downtown area including nine towers. Commissioned by real estate operator Tishman Speyer, the model measures 6ft by 6ft and was created using a digital model from creative agency, Steelblue and produced by Autodesk. The print is a 1:1250 scale model measuring just over 1ft and was created with individual parts to allow for changes to be made to buildings without the need for the entire model to be reprinted. Each block took between six and 18 hours to print. Blending new tech with an ancient trade to replicate Michelangelo. On this very day 451 years ago the world lost its greatest artist, unbeknownst to the 16th Century Italians that mourned Michelangelo di Lodovico Buonarroti Simoni’s demise at the age of 88 his legacy would never be surpassed. 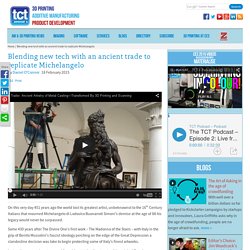 Some 430 years after The Divine One’s first work – The Madonna of the Stairs – with Italy in the grip of Benito Mussolini’s fascist ideology perching on the edge of the Great Depression a clandestine decision was take to begin protecting some of Italy’s finest artworks. Instructions were given to several foundries to take direct casts of the original Renaissance masterpieces; Fonderia Artistica Ferdinando Marinelli took charge of Michelangelo’s moulds. Those moulds remain the only moulds ever cast from the original masterpieces. Announcing Stainless Steel PLA & Magnetic Iron PLA! — PROTO-PASTA. Last night we celebrated the one year anniversary of Proto-pasta. 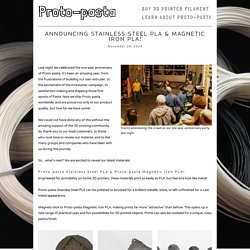 It's been an amazing year, from the frustrations of building our own extruder, to the excitement of the Kickstarter campaign, to satisfaction making and shipping those first spools of Pasta. Now we ship Proto-pasta worldwide, and are proud not only of our product quality, but how far we have come! 3D Printer Guide — Fabbaloo. Stay up to date on 3D Printing: Menu Found 79 3D printers for you to consider 3D Printer Interactive Buying Guide Which 3D printer should you buy? With so many choices it can be very confusing, particularly for those new to 3D printing. Login.aspx?ReturnUrl=%2fSecure%2fE-Commerce%2fdefault.

Cults ・ Buy and sell 3D models for 3D Printer. PrintThis4.Me - PrintThis4.Me. DeskArtes 3D. ColorFabb Announces Carbon Fiber Filament. Netherlands-based colorFabb introduced an incredibly powerful new 3D printer filament today, based on carbon fiber. The new material, cryptically named colorFabb XT-CF20, is a co-polyester based on their custom Amphora polymer. Amphora, jointly developed by colorFabb and Eastman Chemicals, is a new polymer specifically designed for use in 3D printers. Now they’re leveraging this substance by adding carbon fiber. Like other hybrid specialty filaments, the XT-CF20 is a mix of Amphora and in this case, “no less than 20%” carbon fiber material. It prints in the same manner as other 3D printer filaments, yet produces objects with significantly improved engineering performance.

ColorFabb indicates the new material is “twice as stiff as PLA” yet is not brittle. Personal Fab - 3D printers handcrafted in Italy. Printing Challenges For First 3D Printer Aboard International Space Station. The 3D Print Design Challenge submission deadline is Dec. 15! The 3D printer that was launched to the space station in fall 2014 underwent testing at NASA's Marshall Space Flight Center. America has always been a nation of tinkerers, inventors, and entrepreneurs. In recent years, a growing number of Americans have gained access to technologies such as 3D printers, laser cutters, easy-to-use design software, and desktop machinery. These tools are enabling more Americans to design and make almost anything, and the applications to space exploration will help our astronauts to be less reliant on materials from Earth as they explore farther out into the solar system. The 3D printer prints a common part that is used aboard the space station. Additive Manufacturing in Space.

Fibonacci Zoetrope Sculptures. CLAWZ Is Coming. Terrain2STL. Solutions de fabrication numérique. DWS LAB - XFAB. Touch 3D stylus. Nasa emails spanner to space station. 19 December 2014Last updated at 05:56 ET Astronaut Barry Wilmore asked for a ratcheting socket wrench Astronauts on the International Space Station have used their 3-D printer to make a wrench from instructions sent up in an email. It is the first time hardware has been "emailed" to space. Nasa was responding to a request by ISS commander Barry Wilmore for a ratcheting socket wrench. Previously, if astronauts requested a specific item they could have waited months for it to be flown up on one of the regular supply flights. Mike Chen, founder of Made In Space, the company behind the 3-D printer, said: "We had overheard ISS Commander Barry Wilmore (who goes by "Butch") mention over the radio that he needed one, so we designed one in CAD and sent it up to him faster than a rocket ever could have.

" Mr Wilmore installed the printer on the ISS on 17 November. Nasa says the capability will help astronauts be more self-reliant on future long duration space missions. Robot Sculptor. Marylebone, London. M/S of a row of model heads on a shelf, the room has bright red walls. The Danish actress Lillemore Knudsen comes over and examines them.

C/U of her hands turning one of the statues round, the camera pans over to the next one. M/S of Lillemore walking down the stairs to another red room, waiting for her is George MacDonald Reid. ProJet 4500 - ProJet Printers. 3D Print ANY Landscape. Right Now! 3D Print Service - 3D Models - Marketplace. Sketchfab - The Easiest Way to Share Your 3D Models. UP BOX-北京太尔时代科技有限公司-3D打印龙头企业. 3D is easy. Learn - 3D Printing Archives. How to print with bronzeFill The trial period for bronzeFill is up and the first customers have already received and printed with bronzeFill. It’s time for a write up and share print settings and methods of post processing this awesome material. 3D printed Shoes on Pinterest. Stampanti 3D - PowerWASP.

The more gigabytes you have, the more content you can store on your iPad — apps, HD videos, films, photos, books, magazines and more. If, for example, you have a large music library or you frequently download HD films, it’s a good idea to consider an iPad with a larger storage capacity. If you have a relatively small music or photo library or rarely make or buy films, an iPad with a smaller capacity may be better for you. Of course, over time you will add more things to your iPad, so you’ll want to think about how your storage needs may evolve.

Wi–Fi or Wi–Fi + Cellular? Wi-Fi model: Uses high-speed Wi-Fi networking to connect to the Internet. Wi-Fi + Cellular model: Keeps you connected to the Internet using a fast mobile data connection when Wi-Fi isn’t available. Tweak it, Make it. 3D customization. The mobile 3d printing app to design monsters. The shape of things to come: A consumer's guide to 3D printers. CES 2013 proved to be something of a coming out party for consumer-facing 3D printers. Sure MakerBot earned a fair amount of attention at last year's show with the announcement of the Replicator, which snagged its share of awards from various press outlets. 3D Printing Basics. Table of contents: Your 3D design turns into reality with the 3D printing. 3D printing like a boss home » 3dprintuk. Formlabs - High Resolution Desktop 3D Printer. Could the 3D Printer save the public library service? I have noticed for a short while something on the internet about public libraries becoming “Maker Spaces” where people can use, amongst other things, 3D printers.

There’s this video which explains the possibilities, if you’ve not seen it already: For those of you who have not heard of 3D printers before, that feeling you now have after watching the video has a name. It’s called “Future Shock” and you’re going to have to get used to it. Give yourself some time and, when you’re ready, we’ll move on. 3D printing. Advances in 3D Printing. Rapid Prototyping Equipment - Systems for Less Than $20,000. Replicator™ 2 Desktop 3D Printer. Bits From Bytes. Pocket Factory - About. In the last several years, 3D printers have become exponentially cheaper and more capable.