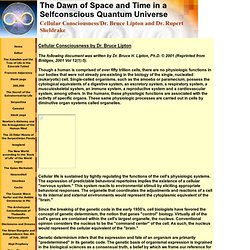 Bruce Lipton The following document was written by Dr. Bruce H. Lipton, Ph.D. © 2001 (Reprinted from Bridges, 2001 Vol 12(1):5). Though a human is comprised of over fifty trillion cells, there are no physiologic functions in our bodies that were not already pre-existing in the biology of the single, nucleated (eukaryotic) cell. Cellular life is sustained by tightly regulating the functions of the cell's physiologic systems.

Since the breaking of the genetic code in the early 1950's, cell biologists have favored the concept of genetic determinism, the notion that genes "control" biology. Genetic determinism infers that the expression and fate of an organism are primarily "predetermined" in its genetic code. The primacy of DNA in influencing and regulating biological behavior and evolution is based upon an unfounded assumption. The notion that the nucleus and its genes are the "brain" of the cell is an untenable and illogical hypothesis. Bruce Lipton. Video 6 0:37 Genes cannot self-activate. 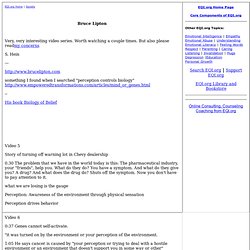 "it was turned on by the environment or your perception of the environment. 1:05 He says cancer is caused by "your perception or trying to deal with a hostile environment or an environment that doesn't support you in some way or other" Nice quote from "The greatest gift you can give to others is a better you. " Today I would like to talk about the new biology, which I am very excited about. In 1953, James Watson and Francis Crick discovered the structure of DNA, the molecule from which genes are made. In 1958, Francis Crick created a hypothesis called “The Central Dogma.” The important point here is that information only goes in one direction. The cover of this LIFE magazine asks “Were you born that way?” Since we cannot influence our genes, and since we did not pick our genes as far as we know, and we cannot change our genes, we are “victims” of our heredity.

Then what is the role of the nucleus? In Japan there is a long history of kotodama. From. Bruce Lipton PhD: Quack, ignoramus « Spirituality is No Excuse. People googling “Bruce Lipton quack” often get referred to this blog, as that phrase was briefly mentioned in a comment on one post or another. 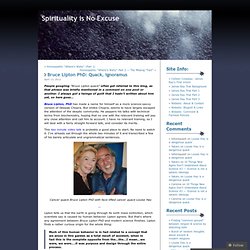 I always got a twinge of guilt that I hadn’t written about him yet, so here goes… Bruce Lipton, PhD has made a name for himself as a more science-savvy version of Deepak Chopra. But Unlike Chopra, seems to have largely escaped the attention of the skeptic community. He peppers his talks with technical terms from biochemistry, hoping that no one with the relevant training will pay any close attention and call him to account. I have no relevant training, so I will deal with a fairly straight forward talk, and consider its merits. Quack of the week: Healing Water Online. In our last quack of the week, Kamel exposed companies selling algae found in pond water, and claiming they could harness the power of your stem cells. 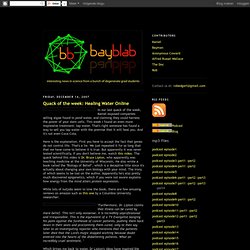 This week I found an even more impressive treatment: tap water. That's right someone has found a way to sell you tap water with the premise that it will heal you. And it's not even Coca-Cola. Mindbook - A Consciousness Expanding Community. Bruce Lipton (biologyofbelief) Bruce Lipton (brucelipton) Bruce Lipton : Internationally Recognized Leader In Bridging Science And Spirit. Bruce lipton quack.