The Orkney Vole – The Newsletter of the Yes Movement in Orkney. Pete North Politics Blog. Scottish independence referendum, plus jokes. Start where you are – use what you have – do what you can. Aangirfan. For Liberty. The Commentator. Your Freedom and Ours. Politicalbetting.com. The Boiling Frog. Raedwald. The tap. EU Referendum. Guy Fawkes' blog of parliamentary plots, rumours and conspiracy.

Exaronews.com. Like most websites, we use cookies (small text files stored on your computer) and related technologies to help run our site, for example, to tell us if you have logged in. 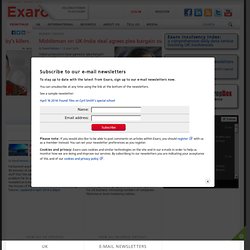 If you choose not to allow our cookies, this site will not work properly. For details please see our Privacy and Cookies Policy. To learn how to manage cookies, click Browser Settings below for help from our chosen partner, Cookie Control. Some cookies on this site are essential, and the site won't work as expected without them. These cookies are set when you submit a form, login or interact with the site by doing something that goes beyond clicking on simple links. We also use some non-essential cookies to anonymously track visitors or enhance your experience of the site. By using our site you accept the terms of our Privacy Policy. (One cookie will be set to store your preference) (Ticking this sets a cookie to hide this popup if you then hit close.

About this tool About Cookie Control. Uncovering the Truth. People Powered News. UK Column. Words are our Best Weapon Against the Lies of History (Truth in the Root of the Word). All Nations Constitutions Are Trust! 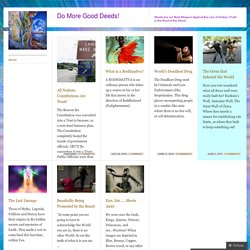 The Reason the Constitution was converted into a Trust is because, as a non-trust business plan, The Constitution completely bound the hands of government officials. [BUT] By converting it into a Trust, Public Officials were then free to make any changes they desired, without their constituents knowledge. But there was one Pitfall confronting them… What is a Bodhisattva? A BODHISATTVA is an ordinary person who takes up a course in his or her life that moves in the direction of Buddhahood (Enlightenment). World’s Deadliest Drug The Deadliest Drug used by Criminals and Law Enforcement alike, Scopolamine. The Germ that Infected the World Have you ever wondered what all those wall were really built for? The Last Lineage Those of Myths, Legends, Folklore and Heresy have their origins in the hidden secrets and mysteries of Earth. Second World War 'The True Story' untold. 102: The Holocaust Controversy – The Case For Open Debate » Germar Rudolf's Personal Website.

An Introduction The Contemporary Issue Is asking questions a crime? 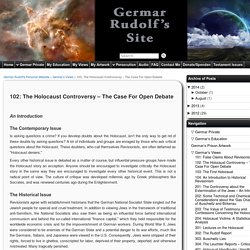 If you develop doubts about the Holocaust, isn’t the only way to get rid of these doubts by asking questions? A lot of individuals and groups are enraged by those who ask critical questions about the Holocaust. These doubters, who call themselves Revisionists, are often defamed as "Holocaust deniers. " Every other historical issue is debated as a matter of course, but influential pressure groups have made the Holocaust story an exception. The Historical Issue Revisionists agree with establishment historians that the German National Socialist State singled out the Jewish people for special and cruel treatment. In contrast to establishment historians, Revisionists claim that the German State had NO policy to exterminate the Jewish people (or anyone else) in homicidal gas chambers or by killing them through abuse or neglect.

Scottish Independence. Wee Ginger Dug « Biting the hand of Project Fear. Lefty ideas in a modern setting ... The Definitive Scottish News & Politics Website. SCOT goes POP!: If Cameron isn't lying about "the most powerful devolved parliament in the world", Scotland will have to be given fiscal autonomy that at least matches the Basque Country and Navarre. Just a short post, because this is a very simple point. 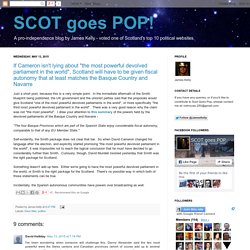 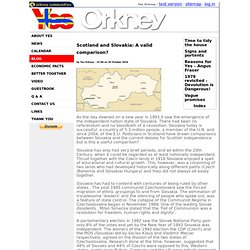 By Yes Orkney - 22:48 on 20 October 2014 As the day dawned on a new year in 1993 it saw the emergence of the independent nation state of Slovakia. There had been no referendum and no bloodbath of a revolution. Slovakia today is successful: a country of 5.3 million people, a member of the U.N. and since 2004, of the E.U. Politicians in Scotland have drawn comparisons between Slovakia and the current debate for Scottish independence but is this a useful comparison? Slovakia has only had very brief periods, and all within the 20th Century, when it could be regarded as at least notionally independent. Slovakia has had to contend with centuries of being ruled by other states . A parliamentary election in 1992 saw the Slovak National Party gain only 8% of the votes and yet by the New Year of 1993 Slovakia was independent. Historically there are too many differences for valid comparisons to be made between the nations of Slovakia and Scotland.

Related:  Research   -  zerohedge.   -  Politik   -  Start where you are – use what you have – do what you can   -  Guy Fawkes' blog of parliamentary plots, rumours and conspiracy   -  The Truthseeker: Behind the headlines – conspiracies, cover-ups, ancient mysteries and more. Real news and perspectives that you won't find in the mainstream media.   -  On a long enough timeline the survival rate for everyone drops to zero   -  People Powered News   -  Education   -  Enterprise