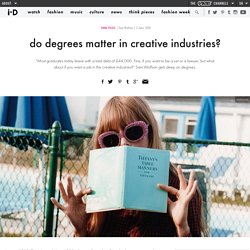 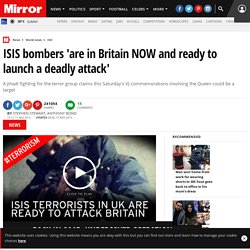 German news anchor calls out racists live on air. This map shows where black people are stopped most by police. In the UK, if you’re black you’re more likely to be stopped and searched by the police. 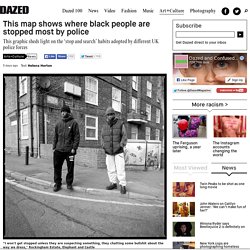 This isn’t new information by any stretch, but this investigation by the Independent shows the scale of the problem and which parts of the UK may need to address their policies when it comes to "stop and search". In 36 out of 39 police forces analysed, black people are targeted more than white people for the intrusive searches. The Ferguson uprising, a year later. On August 9 2014, 18-year old Michael Brown, an unarmed black man, was shot dead by Officer Darren Wilson in Ferguson, Missouri.

A year on, and yet more black Americans have died at the hands of the country’s heavily armed police force. Things are a long way from perfect., but the uprising in Ferguson in reaction to Brown’s death has sparked a global conversation and a new wave of activism that’s fighting for racial equality and against police brutality. St Louis photographer Melissa Spitz has been documenting her home city since November 2014 and engaging with protesters who’ve spent 365 days on the streets of America campaigning for justice. 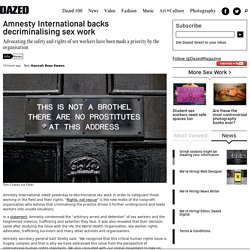 “Rights, not rescue” is the new motto of the nonprofit organisation who believe that criminalising the practice drives it further underground and leads workers into unsafe situations. In a statement, Amnesty condemned the “arbitrary arrest and detention” of sex workers and the heightened violence, trafficking and extortion they face. It was also revealed that their decision came after studying the issue with the UN, the World Health Organisation, sex worker rights advocates, trafficking survivors and many other activists and organisations. Amnesty secretary general Salil Shetty said, “We recognize that this critical human rights issue is hugely complex and that is why we have addressed this issue from the perspective of international human rights standards. End airport shopping rip-off with new laws, ministers told. Russia and Nato 'actively preparing for war' A military drill by mechanised infantry and engineer units of the Russian Armed Forces in Sergeyevsky last week (Barcroft) The report outlines how both Nato and Russia have primed their forces to respond to an escalation since the Ukraine crisis erupted in early 2014. 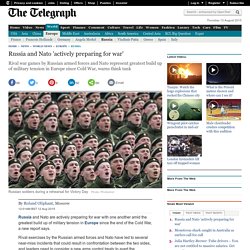 The preparations include major military exercises by both Russia and Nato that appear designed exclusively to respond to one another’s capabilities and potential war plans. ”Whilst spokespeople may maintain that these operations are targeted against only hypothetical opponents, the nature and scale of the operations indicate otherwise,” the report writers say. In March 2015, Russian conducted “snap exercises” that saw 80,000 troops engaged in long-range deployments and simulate combat on a scale that made the United States or Nato the only possibly adversary. Reports hailing Kids Company’s ‘unique’ work funded by charity. Q&A: What Britain wants from Europe - BBC News. David Cameron says he has a mandate to pursue EU reform following the Conservatives' general election victory. 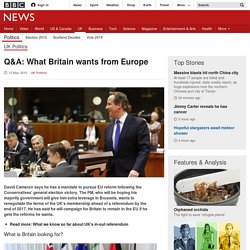 The PM, who will be hoping his majority government will give him extra leverage in Brussels, wants to renegotiate the terms of the UK's membership ahead of a referendum by the end of 2017. He has said he will campaign for Britain to remain in the EU if he gets the reforms he wants. Read more: What we know so far about UK's in-out referendum What is Britain looking for? Mr Cameron has said he does not want to reveal full details of his negotiating hand but he has given a broad indication, in a series of speeches and newspaper articles, of his priorities when he goes into talks with other EU leaders. 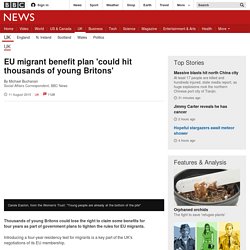 Young people urged to join work experience scheme - BBC News. The government has launched a fresh push to get young people on to work-experience placements.

Thirty companies, including Marks and Spencer, are creating opportunities for youngsters to spend time at work, with more expected to follow. But critics say the scheme does not make up for the the previous coalition government's removal of mandatory work experience from the school curriculum . It also comes as new figures show a slight rise in youth unemployment. Employment Minister Priti Patel said: "Young people tell me they can't get a job without work experience, but they can't get work experience without a job. Airport shops urged to pass VAT savings on to customers - BBC News. Airport shops are being urged to pass on VAT savings made in some cases when customers show boarding passes. 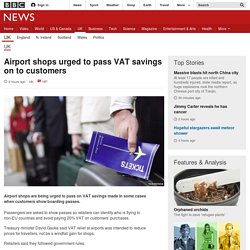 Passengers are asked to show passes so retailers can identify who is flying to non-EU countries and avoid paying 20% VAT on customers' purchases. Treasury minister David Gauke said VAT relief at airports was intended to reduce prices for travellers, not be a windfall gain for shops. Retailers said they followed government rules. UK jobless total rises by 25,000 - BBC News. UK unemployment ticked up to 1.85 million in the April to June period, a rise of 25,000 on the previous quarter. It is the first time in two years that there have been two consecutive rises in the number of people out of work. But over the last 12 months employment levels are still markedly higher with 354,000 more people in work than a year earlier. There has also been a 12% rise in the number of EU nationals who moved to the UK to work over the last year. U.K. Modern Slavery Act Will Hold Businesses Accountable.

Photo by Shutterstock British Prime Minister David Cameron has vowed to crack down on the “abhorrent trade” of human trafficking. Elaborating on the 2015 Modern Slavery Act, which passed into law in March, Cameron confirmed that the new measures will compel companies with turnovers of £36 million or greater to publish an annual slavery and human-trafficking statement starting in October. According to the Prime Minister’s office, the statement must describe the steps a business has taken—if any—to ensure that its supply chains are free of slavery and human-trafficking activity. Downing Street estimates that the new rule will affect 12,000 U.K. companies. Photo by Drop of Light/Shutterstock.