Makerspace-Playbook-Feb-2013.pdf. Makery. FabLab Berlin. Fabcafe Barcelona. Fab Foundation – The People. There are minimally two kinds of people you need to run each of your Fab Labs: a Champion, and a Technical Guru/Mentor. 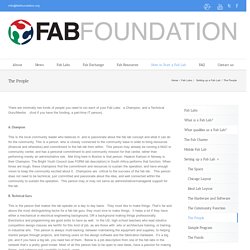 (And if you have the funding, a part-time IT person). A. Champion This is the local community leader who believes in and is passionate about the fab lab concept and what it can do for the community. This is a person who is closely connected to the community base in order to bring resources (financial and otherwise) and commitment to the fab lab from within. B. This is the person that makes the lab operate on a day to day basis. Fab Lab Director description: The Fab Lab @ XXX is a place where ideas and concepts are realized by embracing computerized manufacturing technology, computer science, electrical/electronics engineering, mechanical engineering and other disciplines. A technical degree (ME,EE,CS,IT) and/or similar job experience is required.Strong interpersonal and communication skills are required.Desire to seek and pass on knowledge to others is a must. 1. 2. Report about Hidakuma autumn festival 2015. 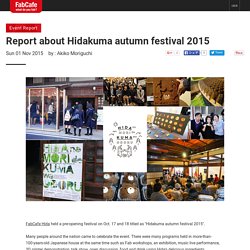 Many people around the nation came to celebrate the event. There were many programs held in more-than-100-years-old Japanese house at the same time such as Fab workshops, an exhibition, music live performance, 3D printer demonstration, talk show, open discussion, food and drink using Hida's delicious ingredients. Hida is known as its rich forestry, especially with broad-leaved trees. Our aim is to utilize these broad-leaved trees which have no value in the current market and produce products while bringing innovative ideas to the society. One of the example showed in the festival was 2 speakers made of different broad-leaved trees. FabCafe Hida will be officially opening its door next spring as a 2nd digital fabrication cafe in Japan. We will constantly update you with new information in this blog, so please stay tuned and enjoy the below festival report, first!

Many different works. Creators in 5 Cities Drew With Takeout Cups as their Canvas. In October 2015, Drawing to Go, an event where you can draw on a takeaway coffee cup, was held in FabCafes around the world. 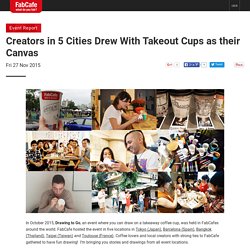 FabCafe hosted the event in five locations in Tokyo (Japan), Barcelona (Spain), Bangkok (Thailand), Taipei (Taiwan) and Toulouse (France). Coffee lovers and local creators with strong ties to FabCafe gathered to have fun drawing! I’m bringing you stories and drawings from all event locations. [Tokyo] Excitement Grows as Over 50 People Gather Together! Over 150 Cup Drawings Are Born Opened in 2012, FabCafe Tokyo was the first ever FabCafe. FabCafe Tokyo invited Tokyo-based illustrator Mariya Suzuki Mariya Suzuk to participate in the event.

Over 150 paper cups were drawn on this day. [Bangkok] Families and Tourists! The event was held in FabCafe Bangkok featuring animator and designer Peerapat Kittisuwat. [Barcelona] Members of the Co-working Space MOB Gave It a Go! [Taipei] Picturing the Stronghold of Taiwanese Creativity [Toulouse] Fresh from the Oven! Fab Foundation – Ideal Lab Layout. The Fun Theory: Volkswagen Masters the Viral Video. Great viral videos are hard to come by, but Volkswagen (or rather ad agency DDB Stockholm) appears to have hit the bullseye. 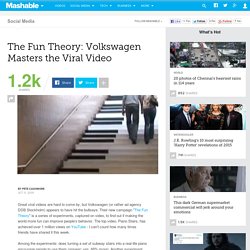 Their new campaign "The Fun Theory" is a series of experiments, captured on video, to find out if making the world more fun can improve people's behavior. The top video, Piano Stairs, has achieved over 1 million views on YouTube - I can't count how many times friends have shared it this week. Among the experiments: does turning a set of subway stairs into a real-life piano encourage people to use them (answer: yes, 66% more). Another experiment asks whether making a trash can sound like a 50ft-deep well will make people pick up their trash. An upcoming experiment, meanwhile, will turn a bottle recycling center into an arcade game. The brand placement is as subtle as it could possibly be: a simple VW logo dropped in at the end. Piano Stairs World's Deepest Bin. Gambiarra: repair culture by Felipe Fonseca.

Maker culture has gained a lot of ground in the last few years. 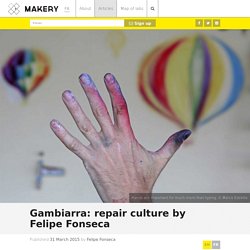 Maybe too much, in fact. We can of course ignore those people who are only, as always, surfing the current wave of hype. They seldom have any clue of the ideas they are selling themselves with anyway. But it also feels as though everybody else is talking about maker culture. Those words are even being uttered by people who have always been opposed to what they should mean. Garagem Fab Lab (@garagemfablab) Instagram. 3D Printing to solve a problem // How-To.