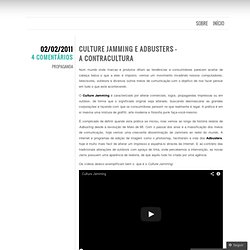 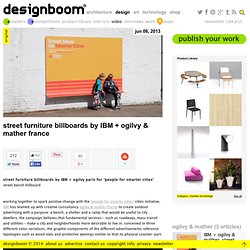 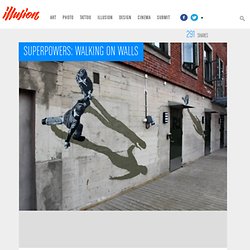 They are not relatives of Peter Parker, but they are strategically placed to create the illusion that they are walking on buildings. STROK has also painted individuals on other surfaces such as wood, metal, glass, and more. See also: “Stuck in the Sewer.” Photos © STROK Via Street Art News. Book review: Going Public - Public Architecture, Urbanism and Interventions. Going Public - Public Architecture, Urbanism and Interventions, edited by Robert Klanten, Sven Ehmann, Sofia Borges and Lukas Feireiss. 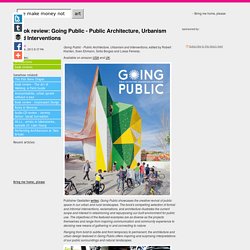 Available on amazon USA and UK. Color Me ____ ZAPPA ~~~ experienceMKT / creativeMEDIA / interactionLAB. Work - rAndom International. Pop Bubble Wrap While you Wait for Instant Anti-Stress. It’s the universally gratifying sensation felt by every man, woman, and child who has ever torn open a package to discover an object protected with bubble wrap: the satisfying pop caused from squeezing little plastic pockets of air (and WOE to the person responsible for inventing the new sheets of bubble wrap that are actually just one contiguous pocket of air and are completely un-poppable, you made my son cry, but I digress). 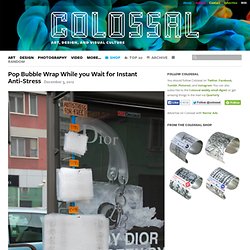 Flossis climbing over the Roggendorf House. Bird On A Wire Interactive Installation. Out of Place. Bedlam at the Old Vic Tunnels. NYC Street Signs that Address Modern Day Etiquette. Mystical Indoor Rain Room Where Visitors Don't Get Wet. This interactive artwork by Random International allows visitors to experience the rain whenever they feel like it. 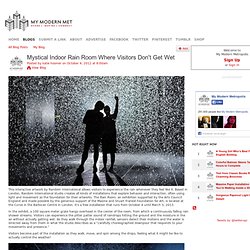 Based in London, Random International studio creates all kinds of installations that explore behavior and interaction, often using light and movement as the foundation for their artworks. The Rain Room, an exhibition supported by the Arts Council England and made possible by the generous support of the Maxine and Stuart Frankel Foundation for Art, is located at the Curve in the Barbican Centre in London. It's a free installation that runs from October 4 until March 3, 2013. In the exhibit, a 100 square meter grate hangs overhead in the center of the room, from which a continuously falling rain shower streams.

Visitors can experience the pitter patter sound of raindrops hitting the ground and the moisture in the air without actually getting wet. Random International website via [The Telegraph] Tetris-Shaped Trash-Filled Street Furniture Encourages Recycling in Argentina. Argentine studio Designo Patagonia created this awesome series of Tetris -shaped street furniture that showcases recyclable materials like plastic bottles, cans, and paper. Located within a city park in Córdoba , Argentina, these unique seats and tables were designed for recreation and to teach passerby about sustainability issues. The Tetris-shaped containers are made from iron frames and glass, are packed with recyclable materials, and feature easy-to-understand eco-facts written on the surface of each piece. 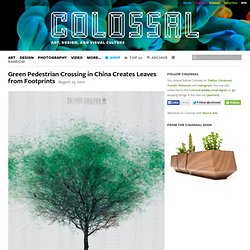 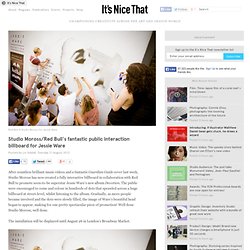 The public were encouraged to come and colour in hundreds of dots that sprawled across a huge billboard at street-level, whilst listening to the album. Gradually, as more people became involved and the dots were slowly filled, the image of Ware’s beautiful head began to appear, making for one pretty spectacular piece of promotion! Well done Studio Moross, well done.

The installation will be displayed until August 26 in London’s Broadway Market. Gunilla Klingberg: A Sign in Space. For her installation titled "A Sign in Space", artist Gunilla Klingberg created a graphic star-pattern printed as a relief on the sand of Spain's Laga beach using a mechanical device, a manufactured steel-cylinder, with the graphic pattern as a matrix relief made of truck tires. 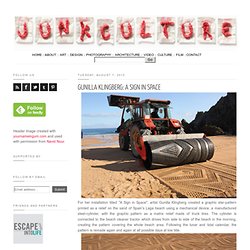 The cylinder is connected to the beach cleaner tractor which drives from side to side of the beach in the morning, creating the pattern covering the whole beach area. Following the lunar and tidal calendar, the pattern is remade again and again at all possible days at low tide. Illuminated Garbage Bags by Luzinterruptus. For their latest intervention titled "Plastic Garbage Guarding the Museum," Spanish performance collective Luzinterruptus created a large scale installation consisting of 5,000 colorful plastic bags filled with air, piled up in dumpsters and lit up from within. 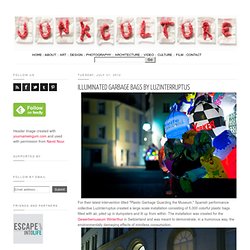 Whimsical Street Art by Filthy Luker. I’m really enjoying some of these urban installations by street artist Filthy Luker. His art attacks are fantastic as well as this huge collection of anthropomorphic objects called Street Life. (via rebel:art) Mark Jenkins.