Differences between linear and interactive documentaries. Featuring the interactive documentary (I) How Emerging Technology is Shaping the Future of Documentary Filmmaking – Whickers World Foundation. It’s been almost a century since pioneering filmmaker Robert J Flaherty journeyed across the icy Hudson Bay, Quebec, to the small Inuit village of Inukjuak, known then as Port Harrison. 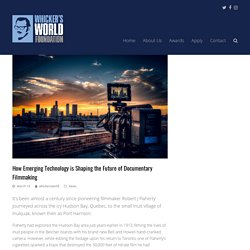 Flaherty had explored the Hudson Bay area just years earlier in 1913, filming the lives of Inuit people in the Belcher Islands with his brand new Bell and Howell hand-cranked camera. However, while editing the footage upon his return to Toronto, one of Flaherty’s cigarettes sparked a blaze that destroyed the 30,000 feet of nitrate film he had captured. Breaking down barriers and shattering stereotypes through the art of story-telling. ‘Don’t write about what you know,’ advises novelist Colum McCann, ‘but towards what you want to know. 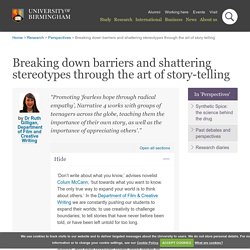 The only true way to expand your world is to think about others.’ In the Department of Film & Creative Writing we are constantly pushing our students to expand their worlds; to use creativity to challenge boundaries; to tell stories that have never before been told, or have been left untold for too long. What We Do - Narrative 4. MISSION: Narrative 4 builds a community of empathic global citizens who improve the world through the exchange of personal narratives. 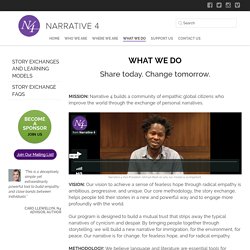 Narrative 4 Vice-President, Ishmael Beah on why our mission is so important. VISION: Our vision to achieve a sense of fearless hope through radical empathy is ambitious, progressive, and unique. Our core methodology, the story exchange, helps people tell their stories in a new and powerful way and to engage more profoundly with the world. Our program is designed to build a mutual trust that strips away the typical narratives of cynicism and despair. By bringing people together through storytelling, we will build a new narrative for immigration, for the environment, for peace. METHODOLOGY: We believe language and literature are essential tools for creating a better society. A Brief History of Documentary Forms - Transom. Intro from Jay Allison: Our lead instructor for the Transom Online Workshop is a unique voice in American documentary, Scott Carrier. 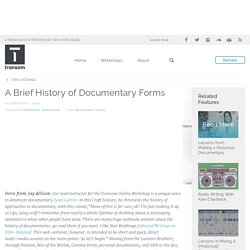 In this Craft Feature, he chronicles the history of approaches to documentary, with this caveat, “None of this is for sure, ok? Documentary Is Never Neutral: Quotes on Documentary. (Many of these quotes were originally posted at "Reel Life Stories: Documentary Film and Video Collections in the UC Berkeley Library's Media Resources Center. 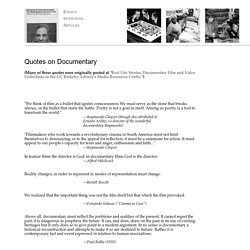 ") "We think of film as a bullet that ignites consciousness We must serve as the stone that breaks silence, or the bullet that starts the battle. Poetry is not a goal in itself. The Ryan Tubridy Show Thursday 2 March 2017 - The Ryan Tubridy Show - RTÉ Radio 1. Prototype For An Interactive Documentary. How it demonstrates a design for an interactive documentary: Interactive documentary is a rapidly growing art form and medium for creative expression and social exploration. 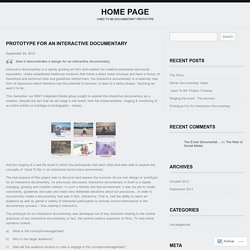 Unlike established traditional mediums that follow a direct linear structure and have a history of theoretical and technical rules and guidelines behind them, the interactive documentary is a relatively new form of expression which therefore has the potential to become, in want of a better phrase, ‘anything we want it to be’. Global Development Professionals Network. Early last year I was given the rather daunting task of finding a creative way to make Christian Aid's resilient livelihoods and disaster risk reduction (DRR) work appealing to mainstream media. 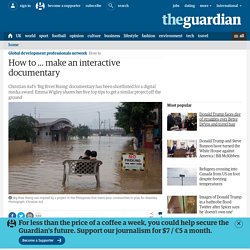 As important as this work is, resilient livelihoods and DRR are not exactly 'sexy' media terms. They don't have quite the same ring as, say, rehabilitating former child soldiers or inter-ethnic tensions in some distant fragile state. Instead it usually involves introducing early warning systems, training search and rescue teams in areas prone to extreme flooding, or providing drought-resistant seeds to African or Asian farmers facing the impacts of climate change. 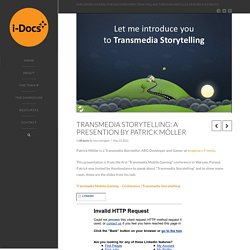 This presentation is from the first “Transmedia Mobile Gaming” conference in Warsaw, Poland. Patrick was invited by Voodoodance to speak about “Transmedia Storytelling” and to show some cases, these are the slides from his talk: Related Transmedia views: An interview with Nuno Bernardo. Interactive Docs - PDFs. Interculturalism and Immigration Reform? Integration Policy in Ireland – Human Rights in Ireland.

It has been an interesting time for asylum and immigration policy in Ireland. 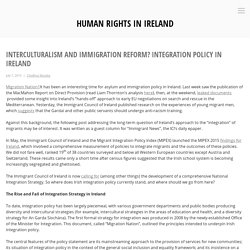 Last week saw the publication of the MacMahon Report on Direct Provision (read Liam Thornton’s analysis here), then, at the weekend, leaked documents provided some insight into Ireland’s “hands-off” approach to early EU negotiations on search and rescue in the Mediterranean. Yesterday, the Immigrant Council of Ireland published research on the experiences of young migrant men, which suggests that the Gardaí and other public servants should undergo anti-racism training. The 15 Things I’ve Learned about Transmedia Storytelling. Ingrid Kopp, the Tribeca Film Institute’s Director of Digital Initiatives, recently shared her wisdom garnered over the year’s she has spent in the transmedia world in a presentation for the X Media Lab conference in Switzerland. 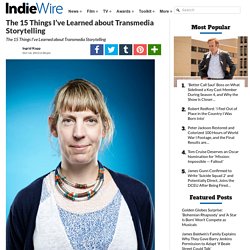 While her initial presentation (available via SlideShare at the bottom of this post) had ten lessons learned, she’s expanded on the original list with five additional dollops of wisdom. Take a look! Changing Ireland: Including Immigrants. Managing Diversity - Strategies - Local. Stan Douglas' Circa 1948: 'It's not a game, it's a story' “There’s more truth in the lie than in the documentary,” Stan Douglas tells me. We’re standing in a cavernous New York art gallery, gazing up at one of his larger photographs, a hyperreal panoramic tableau of West Indian men playing cricket in a Vancouver park. The title is Cricket Pitch, 1951 – but it wasn’t shot then. It was photographed in 2010, and while it purports to be a traditional vintage print, it actually combines multiple shots with digital technology that makes Photoshop look like amateur hour.

Nothing’s ever simple in Douglas’s images, but that’s the only way he knows how to work. PlanningProject. Rebutting ‘The Interactive Paradox’ – Point of View Magazine. In POV #97, Sergeo Kirby asked a series of needed questions about the landscape of interactive documentary. (Read Kirby’s article here.) Unfortunately, it felt like many of the answers he provided were reached before he started writing the article. Sergeo is a friend whose innovations have contributed some great things to Canadian doc culture, but that article can’t skate by without a rebuttal. His first question is one that the Canadian documentary community certainly needs to ask: “Does the interactive digital documentary (directly or indirectly) negatively affect the traditional narrative documentary?”

Too bad Sergeo dodges his own question by diving into inside baseball, Canadian policy-style. The Interactive Paradox – Point of View Magazine. At the 2014 festival holiday gathering for Telefilm and the Canadian Media Fund (CMF), documentary directors and producers sipped tea and nibbled on scones as they met, some for the first time, the bureaucratic employees who dispense $58-million each year to make Canadian docs. As an activist film director and producer, I wanted to talk to someone about the mandate of the CMF that forces filmmakers to become media-makers. Since 2010, the CMF has required that each documentary be produced with a digital component to accompany the linear narrative.

I got some of the answers I was looking for from the media liaison people at the CMF, Maurice Boucher and Pierre Campeau. But my big question was: does the interactive digital documentary (directly or indirectly) negatively affect the traditional narrative documentary? While they were not able to answer that query, they did provide me with a lot of relevant statistics. Matters of Time: A Phenomenological Approach to Interactive Documentary. American Futures – Hollow & Question Bridge. June 20th saw the launch of Hollow – Elaine McMillion’s ambitious interactive documentary about post-industrial life and hope in McDowell County, West Virginia.

Dealing with one community but telling a common story of rural America, Hollow has already received much well-deserved attention. The site has attracted over 20,000 viewers from around the world, and a screening locally drew in over 150 residents. McMillion has come up with a treatment that is both immersive and participatory – providing a vivid, moving portrait of this rural American community and an ongoing platform for local communication.

Shannon K'doah Range. Freedom and Engagement in Interactive Narratives by Florent Maurin on Prezi. Multimodal Analysis: “Snow Fall: The Avalanche at Tunnel Creek” “Snow Fall”, a multimedia long-form narrative (Rue, 2013) composed by sports writer John Branch, depicts the February 19th avalanche at Tunnel Creek in Washington State. This multimodal ensemble (Bezemer & Kress, 2008) debuted on the New York Times’ website in December of 2012 and has received mixed review s, but also fascination from readers around the world. » INTERACTIVE STORYTELLING TOOLS: FRIENDS OR FOES? The Interactive Documentary. Definition Proposal and Basic Features of the New Emerging Genre. The interactive multimedia documentary as a discourse on interactive non-fiction: for a proposal of the definition and categorisation of the emerging genre - Hipertext - ( UPF )

What is the difference between a migrant, a refugee and an asylum seeker? » A SHORT HISTORY OF THE HIGHRISE. Centre for Transcultural Research and Media Practice - Dublin Institute of Technology. Asylum seekers, refugees, migrants – understanding immigration systems. Asylum Seekers, Refugees and Migrants. What is the difference between a refugee, a migrant and an asylum seeker? Migrants, refugees and asylum seekers: what's the difference? 4 storytelling projects that build empathy for refugees. The 6 Most Innovative Interactive Web Documentaries. <i>Collapsus</i>: The Energy Risk Conspiracy. Interactive documentary set in highrises around the world. Magic Ink: Information Software and the Graphical Interface.