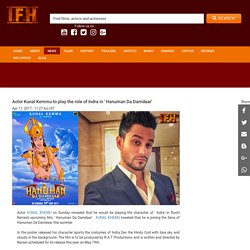 KUNAL KHEMU tweeted that he is joining the Sena of Hanuman Da Damdaar this summer. In the poster released his character sports the costumes of Indra Dev the Hindu God with blue sky and clouds in the background. The film is to be produced by R.A.T Productions and is written and directed by Narain scheduled for its release this year on May 19th. Apart from KUNAL KHEMU, the voice over is given by superstar Salman Khan and has roped in stars like Salman Khan, Makarand Deshpande, Vinay Pathak and Chunky Pandey who also have lent their voice. Actress Shriya Saran swims with the sharks in Maldives. Actress Shriya Saran is going in for the real thing that stands for the idiom, ' 'Swimming with the sharks', the actress made a trip recently to Maldives and enjoyed a most beautiful experience of her life time ever. 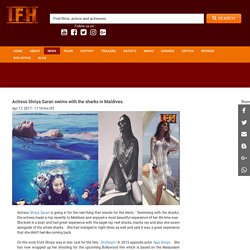 She lived in a boat and had great experience with the eagle ray, reef sharks, manta ray and also she swam alongside of the whale sharks. She had indulged in night dives as well and said it was a great experience that she didn't feel like coming back. Shah Rukh Khan and Brett Ratner met at the 60th San Francisco International Film Festival. Recently superstar King Khan met the Hollywood director Brett Ratner who has directed Rush Hour and X-Men:The Last Stand. 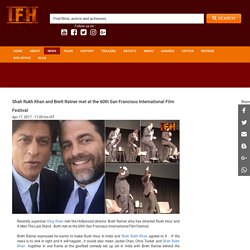 Both met at the 60th San Francisco International Film Festival. Brett Ratner expressed he wants to make Rush Hour in India and Shah Rukh Khan agreed to it . If the news is to sink in right and it will happen , it would also mean Jackie Chan, Chris Tucker and Shah Rukh Khan together in one frame at the goofball comedy set up set in India with Brett Ratner behind the camera. We in the mean time keep our fingers crossed that it may be a matter of time that Shah Rukh Khan and Brett Ratner will be working together. Shah Rukh Khan was at the Film Festival in San Francisco to accept a special tribute and he made Brett do the Lungi Dance too!!! Alia Bhatt says she didn't work with Udta Punjab to win a National Film Award. Actress Alia Bhatt who gave a brilliant performance in the film, ' Udta Punjab' in which she essays a role of a Bihari migrant girl , says the film was not with an intention of winning a National Awards but to deal with the issue of abuse in Punjab. 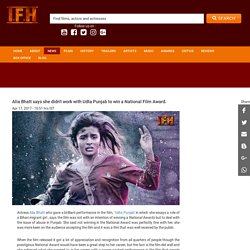 She said not winning in the National Award was perfectly fine with her, she was more keen on the audience accepting the film and it was a film that was well received by the public. When the film released it got a lot of appreciation and recognition from all quarters of people though the prestigious National Award would have been a great step to her career, but the fact is the film did well and she achieved what she wanted to in her career with a power packed performance in the film that people took notice of. Hong Kong gearing up to witness a star-studded show this weekend. Superstar Salman Khan is all geared up for his show in Hong Kong this weekend and will be leading a galaxy of B-Town stars along with him. 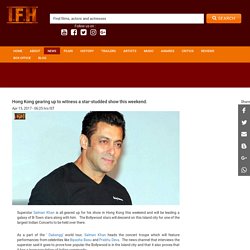 The Bollywood stars will descend on this Island city for one of the largest Indian Concerts to be held over there. As a part of the ' Dabangg' world tour, Salman Khan heads the concert troupe which will feature performances from celebrities like Bipasha Basu and Prabhu Deva. The news channel that interviews the superstar said it goes to prove how popular the Bollywood is in the Island city and that it also proves that it has a large population of Indian community. The ' Bajrangi Bhaijaan' actor has starred in more than 80 Hindi films and has probably visited Hong Kong several times before but this is the first time he is going to be performing for his concert in the city and admitted he is nervous as well as excited about the show. 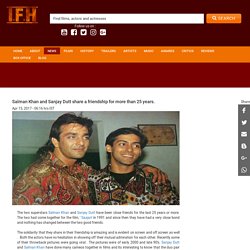 The two had come together for the film, ' Saajan' in 1991 and since then they have had a very close bond and nothing has changed between the two good friends. The solidarity that they share in their friendship is amazing and is evident on screen and off screen as well . John Abraham to act in the film based on Pokhran nuke test. After the hit films like 'Vicky Donor' and 'Madras Cafe', John Abraham is once again all set to produce films for Bollywood as well as for Marathi cinema. 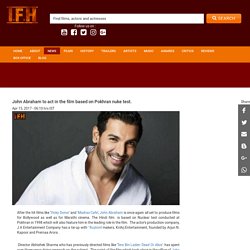 The Hindi film is based on Nuclear test conducted at Pokhran in 1998 which will also feature him in the leading role in the film. The actor's production company, J A Entertainment Company has a tie up with ' Rustom' makers, KriArj Entertainment, founded by Arjun N. Kapoor and Prernaa Arora . .Director Abhishek Sharma who has previously directed films like 'Tere Bin Laden: Dead Or Alive' has spent over three years doing research on the subject .

Shah Rukh Khan has promised to help the acid attack victims. Superstar Shah Rukh Khan attended the grand event at San Francisco Film Festival and the event is no less than a celebration in which he was one of the guest speakers at the Film festival. 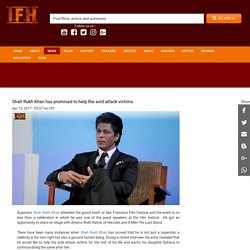 He got an opportunity to share on stage with director Brett Ratner of Hercules and X-Men:The Last Stand. There have been many instances when Shah Rukh Khan has proved that he is not just a superstar, a celebrity in his own right but also a genuine human being. During a recent interview the actor revealed that he would like to help the acid attack victims for the rest of his life and wants his daughter Suhana to continue doing the same after him. 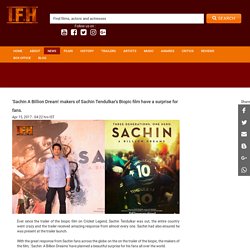 Sachin had also ensured he was present at the trailer launch. With the great response from Sachin fans across the globe on the on the trailer of the biopic, the makers of the film, ' Sachin: A Billion Dreams' have planned a beautiful surprise for his fans all over the world. Malaika to be a part of ‘Dabangg 3’, despite her split with Arbaaz! Malaika and Arbaaz 's love story used to be once upon a time considered as iconic in Bollywood. 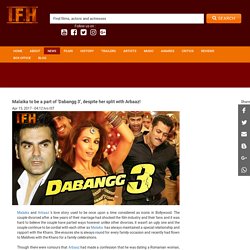 The couple divorced after a few years of their marriage had shocked the film industry and their fans and it was hard to believe the couple have parted ways however unlike other divorces, it wasn't an ugly one and the couple continue to be cordial with each other as Malaika has always maintained a special relationship and rapport with the Khans. She ensures she is always round for every family occasion and recently had flown to Maldives with the Khans for a family celebrations. Though there were rumours that Arbaaz had made a confession that he was dating a Romanian woman, he did not add more details about his new lady love. Ever since the talks are on for the ' Dabangg 3 ', Arbaaz revealed that there will not be any other leading lady apart from Sonakshi Sinha in the film however the question was raised that Malaika was a part of the earlier two parts.

Veteran actor Sanjay Dutt to give a voice-over for his biopic. Sanjay Dutt's untitled biopic film starring Ranbir Kapoor is one of the most awaited films in Bollywood this year. The film only shows the rise and fall of the Bad Boy of the Hindi Film Industry but also highlights the important aspects in the actor's life that have not been discovered by his fans, audience or friends in the Industry. Ranbir Kapoor recently went through the makeover to look like Sanjay Dutt with a splitting image which was so close to the actor that the fans on seeing the resemblance are super excited and are anticipating more updates on the film. Rajkumar Hirani is one of the very few and the first people to visit Sanjay Dutt as soon as he was released from Yerwada Jail in Pune last year.

Latest News. The Shahenshah of Bollywood , Amitabh Bachchan is quite active on social media and enjoys sharing his pictures on various occasions and this one is surely going to get his fans go insane with excitement as Bachchan shares his photograph. Latest News. Follow us on : Sushant Singh Rajput and Kriti Sanon's much awaited film shares its first poster of 'Raabta'. Apr 14, 2017 - 06:37 hrs IST. Latest News. Hrithik Roshan says life has been his best teacher and he is now willing to share to his wide worldwide. The actor had almost given up on his life but he somehow overcame that feeling with a new learning every time he wanted to give up.

The Kaabil actor has come up with a video to motivate people to ' Keep Going in Life' He says in his worst moments in his life including when Sussanne Khan walked out and separated from Hrithik Roshan with their kids, it only taught him lessons. Latest News. After the recent racist and intolerant attacks on African students in Noida and the insensitive remarks made by former Parliament ,Twitteratis strongly condemned the spark off, Abhay Deol slammed many Bollywood celebrities for endorsing fairness creams in the past, urging his colleagues in the industry by influence the people into believing that only fair skin is beautiful.