Latest News. Follow us on : Golmaal Again creating a buzz with lots of Bollywood stars visiting the sets. 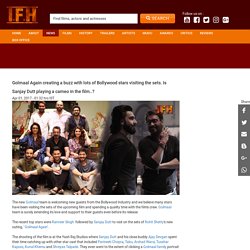 Is Sanjay Dutt playing a cameo in the film..? Latest News. At a recent awards ceremony filmmaker Karan Johar announced if he ever made a biopic film on his best buddy Twinkle Khanna, he would want Alia Bhatt to play the role. 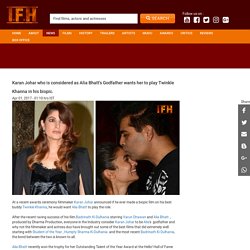 After the recent raving success of his film Badrinath Ki Dulhania starring Varun Dhawan and Alia Bhatt , produced by Dharma Production, everyone in the Industry consider Karan Johar to be Alia's godfather and why not the filmmaker and actress duo have brought out some of the best films that did extremely well starting with Student of the Year , Humpty Sharma Ki Dulhania and the most recent Badrinath Ki Dulhania, the bond between the two is known to all. Alia Bhatt recently won the trophy for her Outstanding Talent of the Year Award at the Hello! Hall of Fame 2017. Karan Johar who presented the award to the young actress in his speech said he would want the Udta Punjab star to play his friend Twinkle Khanna's biopic if he ever made one.

Latest News. The new release that is going to be the world's first feature film to be released in 16 June Bank Chor will be released with an amazing technology that is being designed at the next level generating a three dimension image which will surround the audience and activate their five senses coming out alive in the form of touch, sight, hear, smell and taste as well as the thoughts, imagination and feelings. 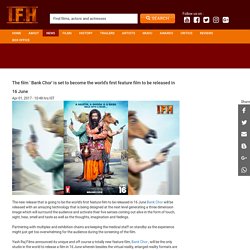 Partnering with multiplex and exhibition chains are keeping the medical staff on standby as the experience might just get too overwhelming for the audience during the screening of the film. Yash Raj Films announced its unique and off course a totally new feature film, Bank Chor , will be the only studio in the world to release a film in 16 June wherein besides the virtual reality, enlarged reality formats are being used which will help the viewers to not be just an audience but will also be a part of the film.

A revolutionary experience it will be which will rock the world. Latest News. Latest News. Veteran actress and social activist Shabana Azmi said if the change is to happen in our society, then it must be reflected in the mainstream cinema which is a vital medium of communication. 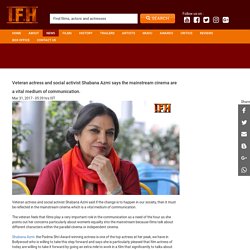 The veteran feels that films play a very important role in the communication as a need of the hour as she points out her concerns particularly about women's equality into the mainstream because films talk about different characters within the parallel cinema or independent cinema. Shabana Azmi the Padma Shri Award winning actress is one of the top actress at her peak, we have in Bollywood who is willing to take this step forward and says she is particularly pleased that film actress of today are willing to take it forward by going an extra mile to work in a film that significantly to talks about Women.

Shabana Azmi will be seen in the forthcoming film, directed by the critically acclaimed filmmaker Aparna Sen. Latest News. Bollywood actress Raveena Tandon's film ' Maatr ' is not made with the intention of a commercial success in mind says the actress. 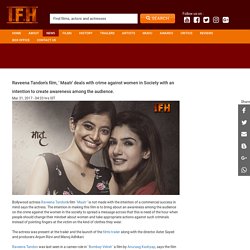 The intention in making this film is to bring about an awareness among the audience on the crime against the women in the society to spread a message across that this is need of the hour when people should change their mindset about women and take appropriate actions against such criminals instead of pointing fingers at the victim on the kind of clothes they wear. The actress was present at the trailer and the launch of the film's trailer along with the director Aster Sayed and producers Anjum Rizvi and Manoj Adhikari. 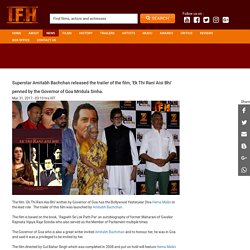 The trailer of this film was launched by Amitabh Bachchan . The film is based on the book, ' Rajpath Se Lok Path Par' an autobiography of former Maharani of Gwalior Rajmata Vijaya Raje Scindia who also served as the Member of Parliament multiple times. The Governor of Goa who is also a great writer invited Amitabh Bachchan and to honour her, he was in Goa and said it was a privileged to be invited by her. The film directed by Gul Bahar Singh which was completed in 2008 and put on hold will feature Hema Malini as Vijaya Raje Scindia along with Vinod Khanna. Latest News. This year the tenth year of the Indian Premier League ( IPL) is likely to be travelling in eight cities in India, commencing in Hyderabad. 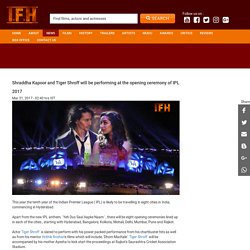 Apart from the new IPL anthem, ' Yeh Dus Saal Aapke Naam ' , there will be eight opening ceremonies lined up in each of the cities , starting with Hyderabad, Bangalore, Kolkota, Mohali, Delhi, Mumbai, Pune and Rajkot. Actor Tiger Shroff is slated to perform with his power packed performance from his chartbuster hits as well as from his mentor Hrithik Roshan's films which will include, 'Dhom Machale'.

Latest News. Delhi boy Shahrukh Khan who is one of the biggest superstars of Bollywood today , who's earned the title of ' King Khan' started his career in Bollywood in Mumbai without a Godfather in the Industry. 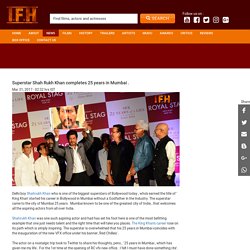 The superstar came to the city of Mumbai 25 years . Mumbai known to be one of the greatest city of India , that welcomes all the aspiring actors from all over India. Shahrukh Khan was one such aspiring actor and had has set his foot here is one of the most befitting example that one just needs talent and the right time that will take you places. The King Khan's career rose on its path which is simply inspiring. The superstar is overwhelmed that his 25 years in Mumbai coincides with the inauguration of the new VFX office under his banner ,'Red Chillies' . Latest News. Taking a look at the central chacters of the much awaited film, ' Naam Shabana ' which is releasing today , the film features special appearance by some stalwarts of the industry that includes Akshay Kumar, Danny Denzongpa and Anupam Kher. 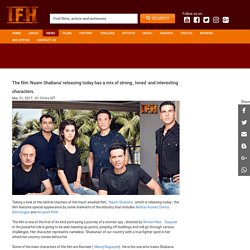 The film is one of the first of its kind portraying a journey of a woman spy , directed by Shivam Nair . Taapsee in the powerful role is going to be seen beating up goons, jumping off buildings and will go through various challenges. Latest News. Quite a few of the Bollywood stars are applauded for their performance or have gained popularity for their acting skills and are now names to recon with are trained under Acting trainer Atul Mathur . 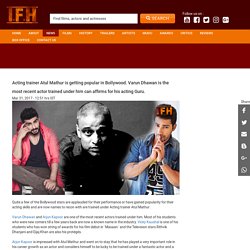 Varun Dhawan and Arjun Kapoor are one of the most recent actors trained under him. Most of his students who were new comers till a few years back are now a known name in the industry. Vicky Kaushal is one of his students who has won string of awards for his film debut in ' Masaan ' and the Television stars Rithvik Dhanjani and Eijaj Khan are also his protégés. Latest News. The 49 year old actor Akshay Kumar shared on his Twitter the poster of his upcoming film which features his co-star Bhumi Pednekar. An unusual love story that is based on the Swachch Bharat Abhiyaan initiated by our honourable Prime Minister Narendra Modi.

The film is slated for its release coinciding with the Independence Day . Akshay Kumar further added... Latest News. Latest News. Actor Nawazuddin Siddiqui's poster , his first teaser for his new venture, 'Babumoshai Bandookbaaz' has been unveiled by the actor. The film is being directed by Kushan Nandy and is an unusual story about a small time contract killer Baby portrayed by Nawazuddin Siddiqui. In the poster the actor is seen form the back view of him walking in a lungi, slippers, carrying an empty dalda can in one hand and a transistor and with a gun tugged in his lungi. A film that is expected to be very different from the usual Bollywood masala films . Latest News. After his winning performance in the National Award winning film in 2013, ' Shahid ' in which he is seen playing the role of Shahid Azmi the late lawyer and human rights activist.

Rajkummar Rao has created a niche for himself and an edge over others. The actor is soon going to be seen in a dynamic role in the upcoming film, ' Omerta' helmed by Hansal Mehta , a true story based on Ahmed Oman Saeed Sheikh, a British terrorist of Pakistan origin who was involved in the 2002 kidnapping and murder of Wall Street Journal reporter Daniel Pearl. Latest News. The second music track ' Aazaadiyan ' sung by the duo Sonu Nigam and Rahat Fateh Ali Khan has been launched by the makers of ' Begum Jaan ' The song has hard hitting lyrics penned by Kausar Muni will definitely leave an affect on your heart. The film as it is, is said to have intense dialogues that will leave an impact on the audience with her power packed performance by Vidya Balan and her co-stars of ' Begum Jaan ' and its not just the performance the music will touch the hearts of the audience as well.

The film by Srijit Mukherji , an adaptation of Bengali film, ' Rajkahini' marks his directorial debut in Bollywood . The rumours are that the film may not be screened in Pakistan as it has an underlining plot of the partition . ' Begum Jaan ' slated for its release in all theatres on April 14th. Latest News. As we know most of the single screen cinemas have been struggling since the advent of the multiplex took over the business making it more and more tough for the single screen owners to sustain and make a profit. One of the most recent to succumb in staying afloat in competition with the multiplex is the Regal theatre at Connaught place in Central Delhi. This new development came into order when the owners of the building received notices from the Municipal Corporation after two old buildings collapsed in the area . While for many Delhites who are going to be sad and upset with this decision, Veteran Actor also is nostalgic about bidding goodbye to one of the prominent landmarks of Delhi, in Connaught place.