POPULATION AND THE ENVIRONMENT

Scientists Created a Food They Believe Can Fix World Hunger. The United Nations Food and Agriculture Organization estimates that some 795 million people around the world go to bed hungry every night. 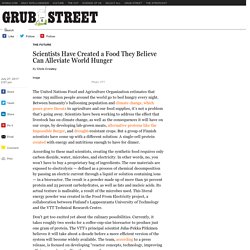 Economist. Economist. NIGERIA is Africa’s most populous country, a designation it wears with pride. 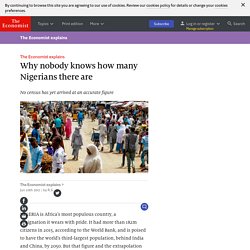 It had more than 182m citizens in 2015, according to the World Bank, and is poised to have the world’s third-largest population, behind India and China, by 2050. But that figure and the extrapolation are based on Nigeria’s 2006 census, which was probably exaggerated. Parliamentary seats and central government money are handed out to states based on population, giving politicians an incentive to inflate the numbers. Building the Great Green Wall: Combatting Sahel’s Economic and Political Instability with Climate Policy - Brown Political Review. Home to impressive monuments such as Timbuktu and Djenné, the Sahel Region, an eco-climate zone that encompasses nations such as Sudan, Mauritania, Mali, Nigeria, Senegal, Niger, Burkina Faso, and Chad (Somalia and Ethiopia are occasionally included), was at the center of the global gold trade for centuries and boasted spectacular civilizations such as the Benin Empire (which lasted from the 13th century to the 19th century). 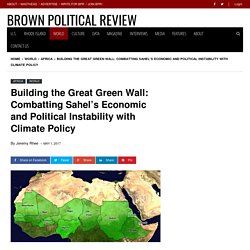 But today, in contrast to the region’s rich history, the people of the Sahel suffer from extreme cases of chronic food shortages and droughts, which is why the region has been the center of recent international development efforts. In order to combat regional hunger, military and political strife, and deteriorating environmental conditions, developed nations have continued to pour resources into the region through military aid and traditional development assistance. Economist. IN THE past few decades something amazing has happened. 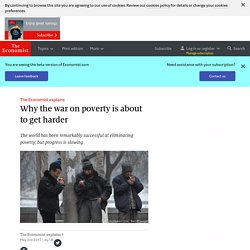 The solution to the migrant crisis is jobs in low income countries. Last year witnessed the largest refugee crisis in Europe since the second world war. 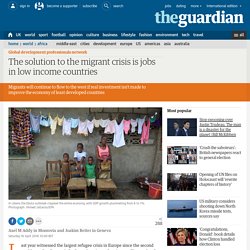 But Europe is far from alone in confronting swelling ranks of migrants. Globally, one out of every 122 people is a refugee, an asylum seeker, or an internally displaced person. In the last 15 years, the number of those travelling in pursuit of better lives and work abroad has surged by 43% to 200 million (pdf). To put that figure in perspective, that’s more than three times the population of the UK. The sobering reality is that this “tragedy of epic proportions” – in the words of leading UN officials, may merely be a harbinger of what is to come. Pensioners' life expectancy falls back. United Nations Department of Economic and Social Affairs. The current world population of 7.3 billion is expected to reach 8.5 billion by 2030, 9.7 billion in 2050 and 11.2 billion in 2100, according to a new UN DESA report, “World Population Prospects: The 2015 Revision”, launched today. 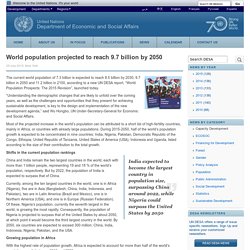 “Understanding the demographic changes that are likely to unfold over the coming years, as well as the challenges and opportunities that they present for achieving sustainable development, is key to the design and implementation of the new development agenda,” said Wu Hongbo, UN Under-Secretary-General for Economic and Social Affairs. Most of the projected increase in the world’s population can be attributed to a short list of high-fertility countries, mainly in Africa, or countries with already large populations. India expected to become the largest country in population size, surpassing China around 2022, while Nigeria could surpass the United States by 2050. So I Can Breathe. GEOG 030: Geographic Perspectives on Sustainability and Human-Environment Systems, 2011. What are feedback mechanisms and how do they work? 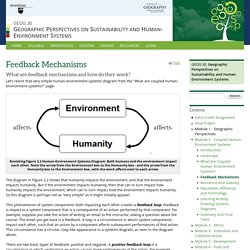 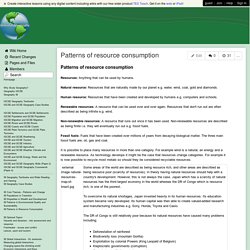 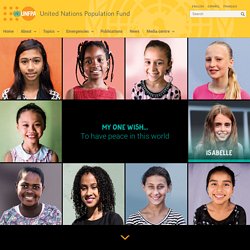 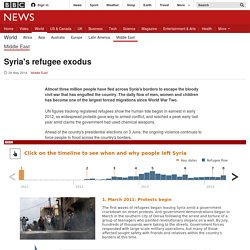 The daily flow of men, women and children has become one of the largest forced migrations since World War Two. UN figures tracking registered refugees show the human tide began in earnest in early 2012, as widespread protests gave way to armed conflict, and reached a peak early last year amid claims the government had used chemical weapons. Ahead of the country's presidential elections on 3 June, the ongoing violence continues to force people to flood across the country's borders. Notes on the data: The data above reflects the date when Syrians registered as refugees (sometimes many days or weeks after fleeing) up to the end of April, according to figures collected by the UN's refugee agency, the UNHCR. Figures are regularly reviewed, meaning some months may see a dip in numbers. Image copyright Getty Images Impact on regions. Syria: The story of the conflict. Image copyright Getty Images More than 250,000 Syrians have lost their lives in four-and-a-half years of armed conflict, which began with anti-government protests before escalating into a full-scale civil war.

More than 11 million others have been forced from their homes as forces loyal to President Bashar al-Assad and those opposed to his rule battle each other - as well as jihadist militants from so-called Islamic State. This is the story of the civil war so far, in eight short chapters. 1. Uprising turns violent. African presidents urge investment in youth as continent sees rare demographic opportunity. UNITED NATIONS, New York/BAGRE, Burkina Faso – Presidents, ministers, and United Nations and World Bank officials met yesterday at UN Headquarters in New York to strengthen their commitments for the young people of Africa. The continent is undergoing a seismic shift in its population structure, with more young people than ever before preparing to enter adulthood and the workforce. “More than 30 per cent of Africa’s population is between the age of 10 and 24, and will remain so for at least the next 20 years,” UN Secretary-General Ban Ki-moon said in a statement prepared for the event. “With the right investments, these trends could be the region’s greatest asset.”

Aminata Loure in Bagre, Burkina Faso. She has received information about family planning, girls' empowerment, education and ending child marriage from an economic empowerment centre, part of a partnership designed to promote a demographic dividend. © UNFPA Burkina Faso/Bénédicte Bama. Will globalisation take away your job? Image copyright Getty Images Millions around the globe may have taken to the streets in recent years to protest against the impact of globalisation on their jobs and communities - but this backlash is only likely to grow as globalisation itself becomes more disruptive. The stark warning comes from Richard Baldwin, president of the Centre for Economic Policy Research think-tank, who has been studying global trade for the past 30 years. Technological advances could now mean white-collar, office-based workers and professionals are at risk of losing their jobs, Prof Baldwin argues.

UN Noncommunicable Disease Summit to focus on long-term killer diseases that threaten economic development in low- and middle-income countries – Geneva, 13 May 2010 – For the first time ever, the United Nations General Assembly will hold a Noncommunicable Disease (NCD) Summit involving Heads of State, in September 2011, to address the threat posed by NCDs to low- and middle-income countries (LMICs). The UN General Assembly [unanimous] decision was congratulated by the World Heart Federation, International Diabetes Federation (IDF), International Union Against Cancer (UICC) and the International Union Against Tuberculosis and Lung Disease (The Union).

Meet the world’s 8 richest men who own as much as poorest 50% Populations are ageing, and at a very fast pace #YearsAhead #WEF17. Climate Change How to live with it resized. Longevity. World Environment Day 2015: 10 most polluted cities in the world. From acid rain to global warming and heart disease to acute respiratory problems, toxic pollution has a devastating impact on human health and the environment. In the past 150 years, carbon dioxide emissions have reached levels higher than they have been for hundreds of thousands of years, with more than 200 million people worldwide affected by air pollution. The problem is deadly – outdoor air pollution was estimated to cause 3.7 million premature deaths worldwide in 2012. These are the 10 cities with the worst air pollution in the world. Last week, the World Health Organisation reported that an estimated 8.2 million deaths a year are linked to air pollution. Cancer and Waterborne Carcinogens.

In 1992 the American Journal of Public Health published a report that showed a 15% to 35% increase in certain types of cancer for people who consume chlorinated water. Where we work - Ethiopia. Where we work - Ethiopia. Air pollution 'causes 467,000 premature deaths a year in Europe' Do smoke-free stoves really save lives? Image copyright Handstand Productions/ CAPS "Exposure to household air pollution is a problem of poverty," says Kevin Mortimer, a medical doctor and a respiratory health researcher at the Liverpool School of Tropical Medicine. UN admits role in Haiti's deadly cholera outbreak. Image copyright AFP. Epidemiologic Transition Model.

What would Brexit mean for farmers and the Common Agricultural Policy? GFAQA5. Agricultural-productivity-growth-in-the-united-states-1948-2011.aspx# Geography of Food - The British Geographer. Goal 1: No Poverty. Food Supply systems - CASE STUDY map by Robert Gamesby on Prezi. Food and Agriculture Organization of the United Nations. FOE AgroecologyReportExecSumm FINAL. Who will feed the world in 2050? New Report: Farming for the Future. The era of robots: thousands of builders to lose jobs as machines take over, says construction boss. SDG 2: End hunger, achieve food security and improved nutrition, and promote sustainable agriculture.

Food and Agriculture Organization of the United Nations. China tops WHO list for deadly outdoor air pollution. 8.3/5.3 How Do We Use Population Pryamids? COP21: Arnold Schwarzenegger: 'Go part-time vegetarian to protect the planet' Why Sweden is talking about immigration more than before. Population growth and the food crisis. UN plan to increase food supplies. Fahad Al-Attiya: A country with no water. Jamie Oliver: Teach every child about food. 830921 GF754 STD. GFAQA628. GF586AQA. GF634%20AQA. GF586. GF704. GF541. Gf398. UN plan to increase food supplies. Food crisis looms in East Africa. Hunger in India states 'alarming' Air pollution costs trillions and holds back poor countries, says World Bank. Why we should have fewer children: to save the planet. Emigration: Number of people leaving Northern Ireland down. Ageing population will 'completely change nature of society'