Mapped: Europe’s Pollution Problem. US Treasury inquires about ISIS use of Toyota vehicles - CNNPolitics.com. In a statement, Toyota said it is part of a broader U.S. 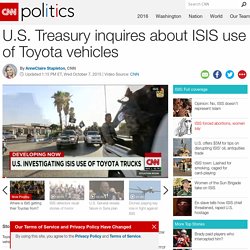 Treasury inquiry looking more closely at how international supply chains and capital flow into the Middle East. The request of Toyota regarding its trucks was first reported by ABC News. Toyota is "committed to complying fully with the laws and regulations of each country or region where we operate and require our dealers and distributors to do the same. We are supporting the U.S. Treasury Department's broader inquiry into international supply chains and the flow of capital and goods in the Middle East," Toyota spokesman Ed Lewis told CNN.

The U.S. GM stock is eating Ford's dust. Ford shares are doing much better than GM's this year. 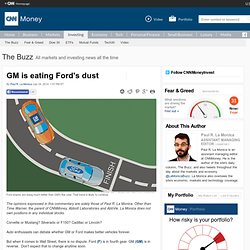 That trend is likely to continue. Ford recalls affect 1.4 million vehicles - May. 29, 2014. About 196,000 Explorers are being recalled for a steering issue, one of four recalls announced Thursday by Ford. 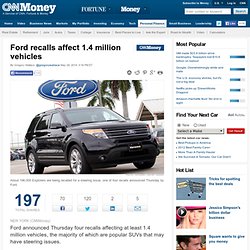 NEW YORK (CNNMoney) The steering issues impact 915,000 Ford Escapes and Mercury Mariners from model years 2008 through 2011, and about 196,000 Ford Explorers from 2011 through 2013. Faulty sensors and electrical connections could cause the vehicles to lose power steering, making steering more difficult and increasing the risk of a crash.

Hungarian Refugee Becomes Car Parts Billionaire in Canada. Frank Hasenfratz got his first taste of entrepreneurship as a teenager in postwar Budapest, fixing motorbikes with spare parts he fabricated in a country wracked by shortages. 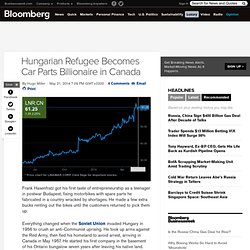 He made a few extra bucks renting out the bikes until the customers returned to pick them up. Everything changed when the Soviet Union invaded Hungary in 1956 to crush an anti-Communist uprising. He took up arms against the Red Army, then fled his homeland to avoid arrest, arriving in Canada in May 1957. General Motors announces another big ignition-related recall. The company is recalling 2.19 million of the same models to fix a problem that allows keys to be removed from ignitions that are not in the "off" position. 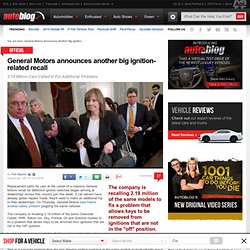 Replacement parts for cars at the center of a massive General Motors recall for defective ignition switches began arriving at dealerships across this country just this week. If car owners have already gotten repairs made, they'll need to make an additional trip to their dealerships. On Thursday, General Motors said there's another safety problem plaguing the same vehicles. Watch Jon Stewart and the Daily Show skewer GM over ignition recalls. We love a good Jon Stewart take down rant. 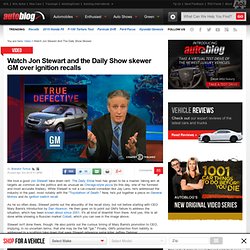 The Daily Show host has grown to be a master, taking aim at targets as common as the politics and as unusual as Chicago-style pizza (to this day, one of his funniest and most accurate tirades). While Stewart is not a car-crazed comedian like Jay Leno, he's addressed the industry in the past, most notably with the "Toyotathon of Death. " Feds fine General Motors $28,000 for stonewalling defect probe. Last week's congressional hearings into a General Motors defect linked to 13 deaths and a recall of 2.8 million vehicles worldwide produced more heat than light, in part due to the deference of GM chief executive Mary Barra to an internal company probe, saying it would provide more answers in due course. 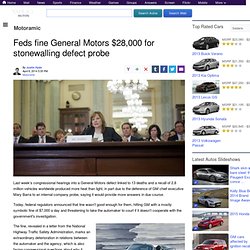 Today, federal regulators announced that line wasn't good enough for them, hitting GM with a mostly symbolic fine of $7,000 a day and threatening to take the automaker to court if it doesn't cooperate with the government's investigation. Related gallery: GM cars affected by recall The fine, revealed in a letter from the National Highway Traffic Safety Administration, marks an extraordinary deterioration in relations between the automaker and the agency, which is also facing congressional questions about why it didn't act sooner to force GM's recall of faulty ignition switches. The 57-cent part at the center of GM's recall crisis - Apr. 2, 2014. GM's recall nightmare - May. 21, 2014. NEW YORK (CNNMoney) Here's the count: Since that filing in June 2009, GM has sold 12.1 million vehicles in the United States. 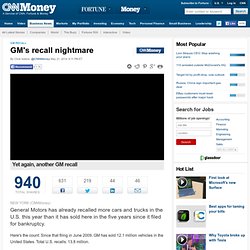 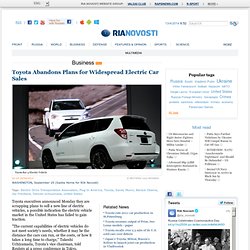 "The current capabilities of electric vehicles do not meet society's needs, whether it may be the distance the cars can run, or the costs, or how it takes a long time to charge," Takeshi Uchiyamada, Toyota's vice chairman, told Reuters at a press conference in Tokyo. Electric vehicle advocates are crying foul, accusing Toyota of using widely known public misconceptions about electric cars to further its agenda of promoting hybrid vehicles, an area that has been very lucrative for the Japanese car maker.

“If I could swear, I would swear,” said Jay Friedland, legislative director for Plug In America, a non-profit working to speed up the shift from gas to plug-in vehicles.