The concept behind this collection is to explore appropriate techniques of style, tone, diction and voice then match it to subject matter, length and writing medium. 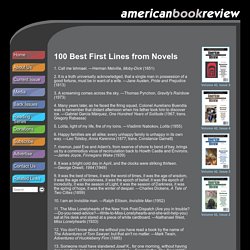 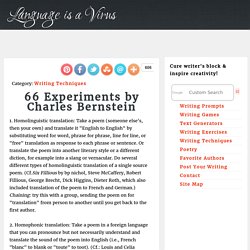 Homolinguistic translation: Take a poem (someone else's, then your own) and translate it "English to English" by substituting word for word, phrase for phrase, line for line, or "free" translation as response to each phrase or sentence. Or translate the poem into another literary style or a different diction, for example into a slang or vernacular. Do several different types of homolinguistic translation of a single source poem. (Cf.Six Fillious by bp nichol, Steve McCaffery, Robert Fillious, George Brecht, Dick Higgins, Dieter Roth, which also included translation of the poem to French and German.) 2. 3. 4. 5. 5 Powerful Writing Techniques That Bring Stories to Life. Take a moment, close your eyes, and recall a story that truly engaged you as a reader — one whose world and characters became completely real for you. 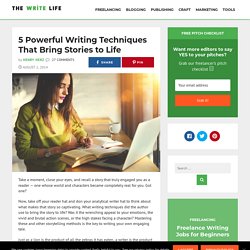 Got one? Now, take off your reader hat and don your analytical writer hat to think about what makes that story so captivating. What writing techniques did the author use to bring the story to life? Was it the wrenching appeal to your emotions, the vivid and brutal action scenes, or the high stakes facing a character? Mastering these and other storytelling methods is the key to writing your own engaging tale. Film-makers use jump cuts, freeze frames, slow motion. Category: Writing Techniques Musicians remix, scratch, sample. 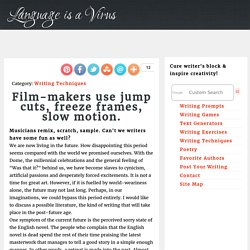 Can't we writers have some fun as well? We are now living in the future. How disappointing this period seems compared with the world we promised ourselves. With the Dome, the millennial celebrations and the general feeling of "Was that it? " Those few books that do try a new approach are met with tired groans. What the naysayers really mean is that they themselves cannot read it. How to make a modern novel. Category: Writing Techniques. 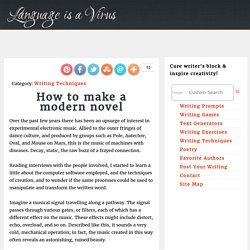 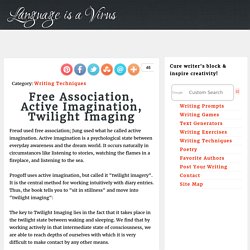 Active imagination is a psychological state between everyday awareness and the dream world. It occurs naturally in circumstances like listening to stories, watching the flames in a fireplace, and listening to the sea. Progoff uses active imagination, but called it "twilight imagery". It is the central method for working intuitively with diary entries. Ginsberg's Mind Writing Slogans. Category: Writing Techniques "First Thought is Best in Art, Second in Other Matters. 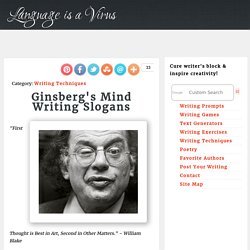 " - William BlakeI Background (Situation, Or Primary Perception)"First Thought, Best Thought" - Chogyam Trungpa, Rinpoche "Take a friendly attitude toward your thoughts. " - Chogyam Trungpa, Rinpoche "The Mind must be loose. " - John Adams "One perception must immediately and directly lead to a further perception. " - Charles Olson, "Projective Verse" "My writing is a picture of the mind moving. " - Philip Whalen Surprise Mind - Allen Ginsberg "The old pond, a frog jumps in, Kerplunk! " - Basho "Magic is the total delight (appreciation) of chance. " - Chogyam Trungpa, Rinpoche "Do I contradict myself? Very well, then I contradict myself. I am large. The Collage Technique of Anais Nin. Category: Writing Techniques By rejecting realistic writing for the experience and intuitions she drew from her diary, Nin was able to forge a novelistic style emphasizing free association, spontaneity, and improvisation, a technique that finds its parallel in the jazz music performed at the café where Nin's characters meet. 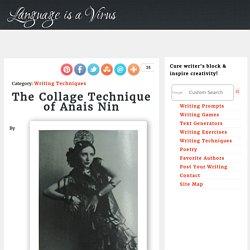 Nin's literary style evolved to suit her material. In House of Incest can be seen a collage technique in the structuring of important segments. In a collage only the most vivid and outstanding pieces are selected, shaped, and placed in juxtaposition with others to build up a whole picture. The final image may be more or less abstract; the only thing it does not employ is a continuous line just as Nin's work does not have a conventional plot line.

From stars in my sky by valerie harms. Jack Kerouac's Essentials of Spontaneous Prose. Category: Writing Techniques SET-UPThe object is set before the mind, either in reality. as in sketching (before a landscape or teacup or old face) or is set in the memory wherein it becomes the sketching from memory of a definite image-object. 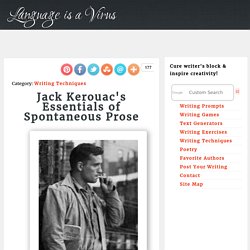 PROCEDURETime being of the essence in the purity of speech, sketching language is undisturbed flow from the mind of personal secret idea-words, blowing (as per jazz musician) on subject of image. METHODNo periods separating sentence-structures already arbitrarily riddled by false colons and timid usually needless commas-but the vigorous space dash separating rhetorical breathing (as jazz musician drawing breath between outblown phrases)--"measured pauses which are the essentials of our speech"--"divisions of the sounds we hear"-"time and how to note it down. " (William Carlos Williams) STRUCTURE OF WORKModern bizarre structures (science fiction, etc.) arise from language being dead, "different" themes give illusion of "new" life. Kerouac's Belief and Technique for Modern Prose.

Rimbaud's Systematic Derangement of the Senses. Category: Writing Techniques The first task of the man who wants to be a poet is to study his own awareness of himself, in its entirety; he seeks out his soul, he inspects it, he tests it, he learns it. 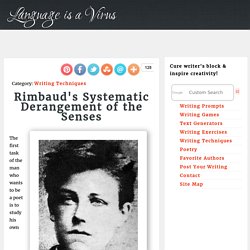 As soon as he knows it, he must cultivate it! . . . Let’s ditch the dangerous idea that life is a story. ‘Each of us constructs and lives a “narrative”,’ wrote the British neurologist Oliver Sacks, ‘this narrative is us’. Likewise the American cognitive psychologist Jerome Bruner: ‘Self is a perpetually rewritten story.’ And: ‘In the end, we become the autobiographical narratives by which we “tell about” our lives.’ Or a fellow American psychologist, Dan P McAdams: ‘We are all storytellers, and we are the stories we tell.’ And here’s the American moral philosopher J David Velleman: ‘We invent ourselves… but we really are the characters we invent.’

It’s an advantage we have over TV and movie script writers and playwrights. It’s also one of the least understood and most often mismanaged elements of the writing craft. As writers, we each tend to either overuse or underuse internal dialogue. Theories of Emotion. Emotions exert anincredibly powerful force on human behavior. Strong emotions can cause you to take actions you might not normally perform, or avoid situations that you generally enjoy. Why exactly do we have emotions?

How to Write a Book favourites by JeantineHobbit on DeviantArt. Dark Treasury: World Building. World Building is fun. Andrew-stanton-image-resized.jpg (JPEG Image, 586 × 801 pixels) Conciseness. 31 Days Preparing Draft. Writing a Multiple Viewpoint Novel. Let's start with the basics... A multiple viewpoint novel is one in which two or more members of your cast list are viewpoint characters – that is, those characters through whose eyes we witness the events of the novel and whose thoughts and feelings we have direct access to.

AP-Tone-and-Diction-Word-List1.pdf. Using Effective Diction. "The difference between the almost-right word and the right word is really a large matter—it’s the difference between the lightning bug and the lightning. " The Complete Guide to Interior Monologue. 9 Rules For Writing Dialogue. Online - Fifty Writing Tools: What's in Store. The Art of Descriptive Writing. Novel Writing Help. The 5 Types of Writing. How to Switch Viewpoints In Fiction.

Style. Be a better writer in 15 minutes: 4 TED-Ed lessons on grammar and word choice. Style, Diction, Tone, and Voice. Style - The five features of effective writing. 7 Ways to Perfect Your Writing “Tone” Understanding Voice and Tone in Writing. Examples of Tone in a Story. Realism - Literature Periods & Movements. A Reader's Manifesto - B. R. Myers. THE EPISTOLARY NOVEL, A CREATIVE WRITING STYLE FOR NOVELISTS by Brian Scott. Jonathan Farina, “On David Masson’s British Novelists and their Styles (1859) and the Establishment of Novels as an Object of Academic Study”

Ali Smith: Style vs content? Novelists should approach their art with an eye to what the story asks. Choose a Style Manual & Documentation Guide for Academics. Wikipedia:Manual of Style. The University of Texas at Austin. The Writer's app. Writing Style. Flogging the Quill: &quot;Writing Science Fiction and Fantasy&quot; by Jeffrey A. Carver. Finding your voice - making your writing sound like YOU. Mihaly Csikszentmihalyi: Flow, the secret to happiness. Persuasive Writing - Emotional vs Intellectual Words.