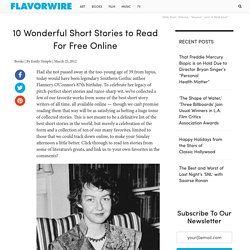 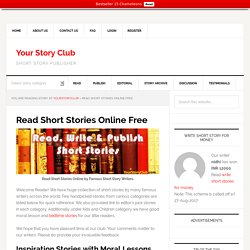 We have huge collection of short stories by many famous writers across the world. Few handpicked stories from various categories are listed below for quick reference. We also provided link to editor’s pick stories in each category. Additionally under Kids and Children category we have good moral lesson and bedtime stories for our little readers. We hope that you have pleasant time at our club. Read 19 Short Stories From Nobel Prize-Winning Writer Alice Munro Free Online. Calling her a “master of the contemporary short story,” the Swedish Academy awarded 82-year-old Alice Munro the Nobel Prize in Literature today. 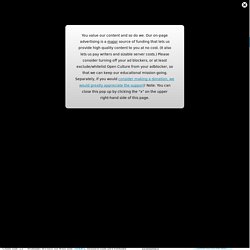 It is well-deserved, and hard-earned (and comes not long after she announced her retirement from fiction). After 14 story collections, Munro has reached at least a couple generations of writers with her psychologically subtle stories about ordinary men and women in Huron County, Ontario, her birthplace and home. Only the 13th woman writer to win the Nobel, Munro has previously won the Man Booker Prize in 2009, the Governor General’s Literary Award for Fiction in Canada three times (1968, 1978, and 1986), and two O.

Henry Awards (2006 and 2008). Her regional fiction draws as much from her Ontario surroundings as does the work of the very best so-called “regional” writers, and captivating interactions of character and landscape tend drive her work more so than intricate plotting. Read Short Stories Online. 30 Free Short Stories You Can Read Online Right Now. Those of us who love short stories know the magic behind a well-told tale. 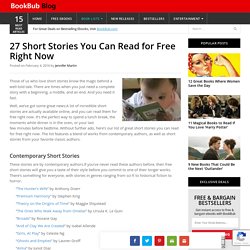 There are times when you just need a complete story with a beginning, a middle, and an end. And you need it fast. Well, we’ve got some great news:A lot of incredible short stories are actually available online, and you can read them for free right now. The Short Story Project - Stories That Cross the Line. Examples of Short Stories : Many Short Stories are here for your enrichment.

100 Prompts for Writing About Yourself – Bryn Donovan. How do you get back into writing again? 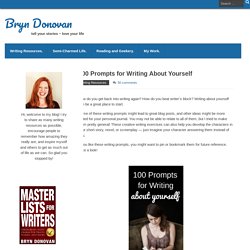 How do you beat writer’s block? Writing about yourself can be a great place to start. Some of these writing prompts might lead to great blog posts, and other ideas might be more suited for your personal journal. You may not be able to relate to all of them, but I tried to make them pretty general! These creative writing exercises can also help you develop the characters in your short story, novel, or screenplay — just imagine your character answering them instead of you. If you like these writing prompts, you might want to pin or bookmark them for future reference. Describe one of your earliest childhood memories.Write about what you see as one of your best qualities.Do you have the same religious beliefs that you had as a child? 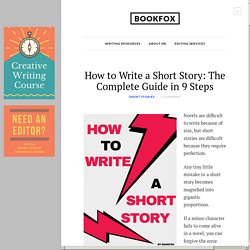 In a short story, a writer has to accomplish a great deal — details, setting, conflict, plot, character development — in a very small space, usually between 3,000 words and 6,000 words, and that requires concision and revision. Read the tips below to find out how to write a short story that will get published, get readers that love you, and get attention from an agent. 1. How to Write a Short Story from Start to Finish. I’m working on a new short story. 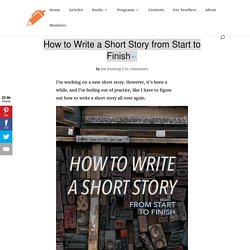 However, it’s been a while, and I’m feeling out of practice, like I have to figure out how to write a short story all over again. To some extent, the process for writing a story is different each time. In the introduction to American Gods, Neil Gaiman quotes Gene Wolfe, who told him, “You never learn how to write a novel. How to Write a Short Story (with Sample Stories) Steps Part 1 Brainstorming Ideas 1Come up with a plot or scenario. 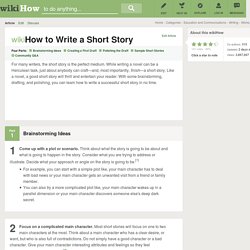 Think about what the story is going to be about and what is going to happen in the story. How to Write a Short Story: 10 Steps. Writing a short story differs from writing a novel in several key ways: There is less space to develop characters, less room for lengthy dialogue, and often a greater emphasis on a twist or an ‘a-ha’ realization. 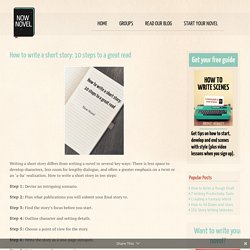 How to write a short story in ten steps: Step 1: Devise an intriguing scenario. 8 Techniques To Up The Drama Factor In Your Short Stories. When it comes to drama and intensity, are your short stories falling…short? 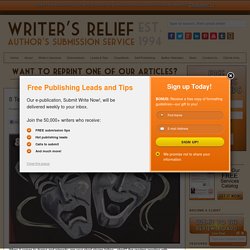 Are readers reacting with “ho-hum” instead of “oh my!”? The good news is that it’s easy to give your short stories a boost of excitement—if you know the tricks. Leave something to the imagination. Short Story Tips: 10 Ways to Improve Your Creative Writing. 5 Key Elements for Successful Short Stories. As the editor of a genre fiction website, I’ve seen my share of short stories—the good and the bad. No matter what kind of fiction you write, being able to craft a good short story can help you sharpen your skills. BBC Arts - BBC Arts - Six short story classics. BLUE HIGHWAY - SHORT STORY WINNER 2013 - Yen Mag. Amelia Mangan | May 11, 2014 This is the highway they write all the saddest songs about.

This stretch of blacktop, this curving arm of macadam on a lonesome byway, tinted pale ivory by the light of a sorrowing moon. Waxing and waning. Ethelbert and the Free Cheese. In partnership with the Commonwealth Writers, Granta is publishing the regional winners of the 2016 Commonwealth Short Story Prize. Lance Dowrich’s ‘Ethelbert and the Free Cheese’ is the winner from the Caribbean. Ethelbert G. Sandiford was the happiest man alive. The second son of Tantie Lucy Ethelbert had just come out of the managing director’s office where it was announced that he had been promoted to the position of Assistant to the Packaging Foreman. Ethelbert was convinced that he was now in management. ‘Sixteen years,’ thought Ethelbert to himself. Stefanie Seddon.

Faraaz Mahomed’s ‘The Pigeon’ is the winning entry from Africa. Each morning, for about four months now, I am woken by the same foul, fat pigeon. I am certain that he’s the same one, even though I have no means to prove it. In truth, I have no way to be sure he is a he either. It used to occur to me that maybe he had left something at the window or inside, and was hoping that being here to retrieve it would allow him some sort of release. Granta Magazine. In partnership with the Commonwealth Writers, Granta is publishing the regional winners of the 2016 Commonwealth Short Story Prize, beginning with Tina Makereti’s ‘Black Milk’ – the winning entry from the Pacific. The Birdwoman came into the world while no one was watching. It was her old people who sent her, the ones who hadn’t chosen to make the transition, who stayed in their feathered forms, beaks sharp enough to make any girl do what her elders told her.

‘It’s time,’ they said. Parting Gift: Short Short Story Competition Winner. HISSAC Highlands and Islands Short Story Association and Writing Competition. Cecile stared at her father. The answer to his question was no, she did not know how to behave like a normal eight-year-old girl. But then, she didn’t want to, not when she could be a Siberian stoat hunting hares in the depths of a crusty white wilderness.

Roald Dahl - The Landlady. Social Media Strategy. New look for the short story. Some of the UK's best young novelists are working with computer games designers to create digital short stories, each inspired by a classic work of literature but featuring games, blogs and web tools. The first of the six stories is Charles Cumming's The 21 Steps, based on John Buchan's classic thriller The 39 Steps. It uses Google Maps and Google Earth to follow the trail of a bewildered young Londoner who witnesses a murder and is forced to smuggle a mysterious liquid on to a plane.

The We Tell Stories project has been created by Penguin in partnership with alternate reality games company SixtoStart. Other participating writers include Toby Litt, who was named as a Granta best young British novelist, Naomi Alderman, winner of the 2006 Orange prize for new writing, and Mohsin Hamid, whose The Reluctant Fundamentalist was shortlisted for last year's Man Booker prize. The Short Story Podcasts.

Broadening the number of resources The Short Story brings its readers, we are extremely pleased to provide this set of podcasts, courtesy of the Florida Centre of Instructional Technologies (FCIT) from the University of South Florida (USF). In due time, we hope to provide a greater number and range of podcasts to TSS. If you would like to offer your own recordings, please contact us as at info@theshortstory.co.uk to discuss the details. Hares in the Old Plantation: a short story by Kevin Barry. Illustration by Laura Carlin Listen – There’s a lock-in at the Connaught Arms, and every melodious old soak in town is inside the place, wall-eyed with drink and songful as crows – it’s three in the morning – and the liquid drunken notes float off and above the town – there are no women to be heard – and from the dark of the alleyway I can name each voice as it rises and taunts, and who have we now, cresting the happy babble, but Mr Cremins – Mr Teddy Cremins of the square jaw and the emotional shoulders – and he rants directions to the Highwood quarry at the top of his burly throttle: “Oh no, no, no, no, no!

Ray Bradbury. 10 Free Stories by George Saunders, Author of Tenth of December, “The Best Book You’ll Read This Year” For writers and serious readers, George Saunders is anything but a newcomer. Saunders published his first short story with The New Yorker back in 1992, and his new stories have regularly debuted in the magazine's Fiction section ever since. Over the years, he has gained the reputation of being a "writer's writer," with authors like Tobias Wolff saying about Saunders: “He’s been one of the luminous spots of our literature for the past 20 years.” But despite his literary accomplishments, and despite winning the prestigious MacArthur award in 2006, George Saunders never quite became a household name until January 6 of this year. On that day, The New York Times published an article with the title, "George Saunders Has Written the Best Book You’ll Read This Year," a pretty bold declaration given that 2013 still had 359 days to go.

14 Fantastic Stories From The New Yorker Archive You Should Read This Summer. Storyville: Top Ten Best Short Stories Ever. How dare I make a list of the top ten short stories ever, right? Who the hell do I think I am? Well, obviously I’m a fan of fiction, of the short story form. I’m also an author. And I now have my MFA in Creative Writing as well. Does that make me an authority? Most of these stories are heavily anthologized or are available in a collection by that author. 7 Short Stories by Junot Díaz Free Online, In Text and Audio. Another Cotton Picking Day! by Norris Chambers (Old Timer's Tales) Issue 1-22. 'short story reading lists' in The Short Story. Short stories by African writers. Short stories by Caribbean Writers.