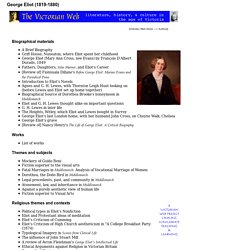 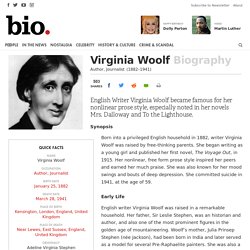 Dalloway and To the Lighthouse. Synopsis Born into a privileged English household in 1882, writer Virginia Woolf was raised by free-thinking parents. Dame Beryl Bainbridge - Literature. Beryl Bainbridge began her working life as an actress and remained an entertainer, as one of Britain's most popular and best-loved novelists. 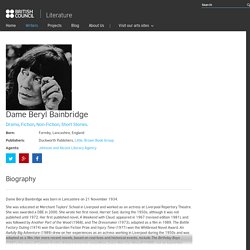 Her work attracted a wide readership as well as critical acclaim, was short-listed for the Booker Prize four times, and won the Whitbread Prize three times, including for Every Man for Himself (1996). Her trademark is the sardonic, even at times macabre wit in her books, usually mercilessly black comedies with eccentric characters. Archive - Modern Writers - In Conversation. Thomas Hardy. Thomas Hardy aged 70, by William Strang Thomas Hardy, OM (2 June 1840 – 11 January 1928) was an English novelist and poet. 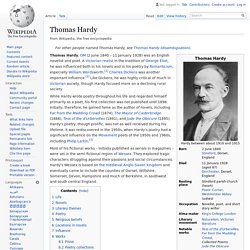 Emily Brontë. Emily Jane Brontë (/ˈbrɒnti/, commonly /ˈbrɒnteɪ/;[1] 30 July 1818 – 19 December 1848)[2] was an English novelist and poet who is best known for her only novel, Wuthering Heights, now considered a classic of English literature. 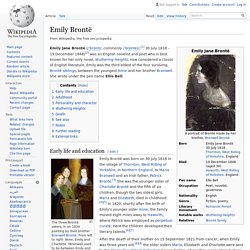 Emily was the third eldest of the four surviving Brontë siblings, between the youngest Anne and her brother Branwell. She wrote under the pen name Ellis Bell. John Wyndham. "When a day that you happen to know is Wednesday starts off sounding like Sunday, there is something seriously wrong somewhere. 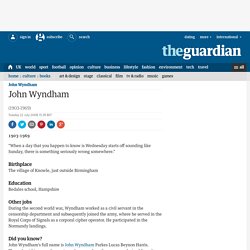 " Birthplace The village of Knowle, just outside Birmingham Education. Virginia Woolf. From Modernism Lab Essays Wiki Articles The Voyage Out. 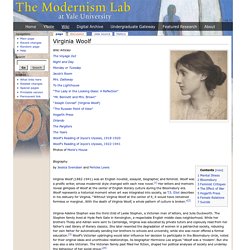 The Wodehouse Society. Archive - HG Wells on the Future - BBC broadcasts from the father of science fiction. The Evelyn Waugh Society. Minette Walters. Books by Minette Walters "I believe you should write what you enjoy reading. 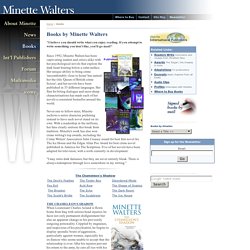 If you attempt to write something you don't like, you'll go mad! " Since 1992, Minette Walters has been captivating readers and critics alike with her psychological novels that explore the dark heart beating below a calm surface. Her unique ability to bring crime 'uncomfortably close to home' has earned her the title 'Queen of British crime fiction', and her novels have been published in 35 different languages. Sue Townsend - Penguin Books UK Authors. Sue Townsend: An Obituary 1946 - 2014 Sue Townsend was one of Britain's most popular, and most loved, writers with over 10 million copies of her books sold in the UK alone. 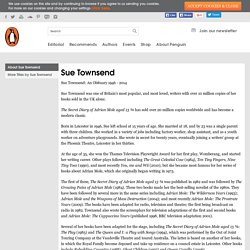 The Secret Diary of Adrian Mole aged 13 ¾ has sold over 20 million copies worldwide and has become a modern classic. Archive - Modern Writers - Release. Tom Sharpe obituary. Tom Sharpe, who has died aged 85, was in the great tradition of English comic novelists and his bawdy style and vulgar approach were said to have made bad taste into an art form – like "PG Wodehouse on acid", in the words of one critic. 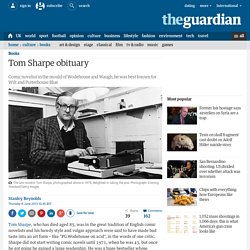 Sharpe did not start writing comic novels until 1971, when he was 43, but once he got going he gained a large readership. He was a huge bestseller whose hardback editions sold like most authors only sell in paperback. Dorothy L. Sayers. Dorothy Leigh Sayers (usually pronounced /ˈseɪ.ərz/, although Sayers herself preferred /ˈsɛərz/ and encouraged the use of her middle initial to facilitate this pronunciation;[1] 13 June 1893 – 17 December 1957) was a renowned English crime writer, poet, playwright, essayist, translator, and Christian humanist.

She was also a student of classical and modern languages. She is best known for her mysteries, a series of novels and short stories set between the First and Second World Wars that feature English aristocrat and amateur sleuth Lord Peter Wimsey, which remain popular to this day. Demons In Her View: The Ruth Rendell Information Site. This section of Gusworld is a companion to the rather more comprehensive Fatal Inversions site which I created to cover Ruth Rendell's Barbara Vine novels. It contains basic information on Rendell's novels, short stories and non-fiction works in her own name, along with the usual selection of links, interviews, news and other bits and pieces. Full acknowledgement must go to the Yahoo Ruth Rendell group, where intelligent conversation about Rendell is always assured. Last updated 10/05/2015 (Short story guide uploaded) At the moment, these pages just offer basic information on each group of titles; I plan to add more detailed comments later.

Novels From To Fear A Painted Devil to Thirteen Steps Down. A Glastonbury Romance. Introduction and summary of the plot[edit] A Glastonbury Romance has several climactic moments, before the major final one. Deborah Moggach ~ Best-selling Author of The Best Exotic Marigold Hotel and Heartbreak Hotel » Biography. Welcome to my website. Here’s a very basic autobiography, but there’s lots more information about my books – how they came about, what inspired them, plots, reviews and so on – if you click onto individual titles. There’s also an extract from “Tulip Fever”, “These Foolish Things” and “In The Dark”. And there’s an Interview, Photos, a Newsletter with the latest developments and events, a page of Contacts, and an email address if you’d like to get in touch and ask me some questions: moggachdeborah@gmail.com. Both my parents were writers – my father wrote naval history, biographies and children’s books; my mother wrote and illustrated children’s books.

Hilary Mantel - Author of Wolf Hall, Bring Up the Bodies, and The Assassination of Margaret Thatcher. A Hypertextual & Illustrated Companion to Malcolm Lowry's Under the Volcano. C.S. Lewis. A scholar and author, Clive Staples Lewis left his mark on the realms of literary criticism, Christian apologetics, and fantasy stories. While children know him best for the seven Chronicles of Narnia, his religious writings such as Mere Christianity and The Screwtape Letters remain popular today, and his work on Milton, A Preface to Paradise Lost, is considered a standard critical work. Born in Belfast, Northern Ireland, Lewis was educated and lived most of his life in England. He served and was wounded in the trenches of World War I France, after which he completed his studies at Oxford University.

John Le Carré. English writer known for disillusioned, suspenseful spy novels based on a wide knowledge of international espionage. Le Carré's famous hero is George Smiley, a Chekhovian character and shadowlike member of the British Foreign Service. D.H. Lawrence Review home. Ken Kesey. Dear Internet Archivists: Once a year we ask you: help keep the Internet Archive free and free of ads. If everyone reading this gave $50, we could end our fundraiser right now. That’s right. Jack Kerouac. LibriVox. James Augusta Aloysius Joyce (2 February 1882 – 13 January 1941) was an Irish novelist and poet, considered to be one of the most influential writers in the modernist avant-garde of the early 20th century. Joyce is best known for Ulysses (1922), a landmark work in which the episodes of Homer's Odyssey are paralleled in an array of contrasting literary styles, perhaps most prominent among these the stream of consciousness technique he perfected.

Other major works are the short-story collection Dubliners (1914), and the novels A Portrait of the Artist as a Young Man (1916) and Finnegans Wake (1939). BBC Radio 4 - In Our Time, Aldous Huxley's Brave New World. Hermann Hesse - Bibliography. David Guterson. David Guterson was born in Seattle in 1956. Aspects of E.M. Forster: Criticism, Summaries, Pictures ... Everything about the British Author. Helen Fielding. "Nobody worries about what Bertie Wooster is saying about masculinity... JP Donleavy’s The Ginger Man at 60. In 1946 a young American arrived in Dublin to study natural sciences at Trinity College. EL Doctorow, author of Ragtime and Billy Bathgate, dies in New York aged 84.

Website of the Arthur Ransome Society (TARS) No Boats on Bannermere. How Nick Hornby Keeps His Writing Fresh. John Steinbeck (Author of Of Mice and Men) Ernest Hemingway (Author of The Old Man and the Sea) Homepage. Archive. How Green Was My Valley. Siegfried Lenz: Deutschstunde (Buchtipp) Booker club: Moon Tiger by Penelope Lively.