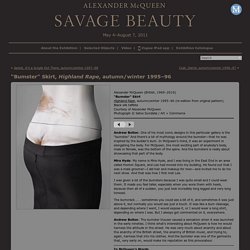 And there’s a lot of mythology around the bumster—that he was inspired by the builder’s bum. In McQueen’s mind, it was an experiment in elongating the body. For McQueen, the most exciting part of anybody’s body, male or female, was the bottom of the spine. And the bumsters is really about showcasing that part of the body. Mira Hyde: My name is Mira Hyde, and I was living in the East End in an area called Hoxton Square, and Lee had moved into my building. I was given a lot of the bumsters because I was quite small and I could wear them. The bumcrack . . . sometimes you could see a bit of it, and sometimes it was just above it, but normally you would see just a touch. Neon Clothes 80s For Girls. Líneas de silueta.

Who Wore It Best: Styles From 80s, 90s and Now. Retrospace: Vintage Style #29: Chick Slacks. I'm not a huge fan of the slacks look for women (as you may have guessed). 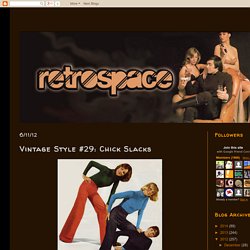 The problem began in the mid sixties - before then, women never wore pants. The Capri got a heavy lift from Laura Petrie on The Dick Van Dyke Show, and with the coming of Women's Lib, pants were fair game for all women. Of course, who can complain about the skin tight jeans that became popular in the mid seventies.... but this post isn't about jeans.

We're talkin' slacks. The term itself is rarely used anymore. A note about bell bottoms: The cuffs would graze the floor and create a dangerous amount of static electricity. . [1-2] Click on images to enlarge. Retrospace: Vintage Style #29: Chick Slacks. Plaid Stallions : Rambling and Reflections on '70s pop culture: Jumpsuit Queens. Unavailable in your country. K's Diaries. DIY Emoji Balloons. By Kelly on Sep 15, 2014 So I was totally keeping a secret from you when I wrote this post about the emoji dancing girls. 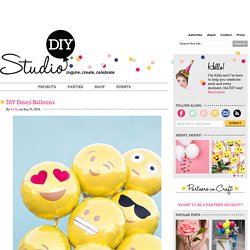 The real reason I was down in the party/piñata district the day I found those fairies was to find some balloons to make these EMOJI BALLOONS!!! Of course, it was a Sunday and the balloon store was closed, but I finally got my hands on some yellow balloons and turned them all sorts of expressive. Urban Magazine. Miley Cyrus presenteert Dirty Hippie Collectie. New York Fashion Week 2014 Update: Miley Cyrus Debuts 'Dirty Hippie' Art Collection at NYFW. First Posted: Sep 11, 2014 03:53 PM EDT Miley Cyrus debuted her first art collection "Dirty Hippie" at Jeremy Scott's fashion show as part of this year's NYFW on Wednesday. 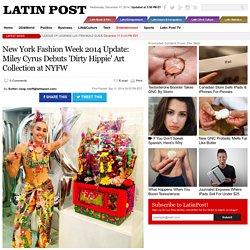 The "Wrecking Ball" hitmaker showed up to the event in a psychedelic bra top and matching loose pants, which complemented her eccentric creation. She accessorized her colorful, bold ensemble with a pair of bright yellow and black Adidas stiletto sneakers and various plastic necklaces that had fake flowers, air fresheners and pacifiers hanging. Cyrus' art installation featured bright colored sculptures jumbled with stuffed animals, giant bongs, plastic jewelry and gifts from fans and even a vibrator. "I had a bunch of f*cking junk an sh*t, and so instead of letting it be junk and sh*t, I turned it into something that made me happy," she told V magazine. The twerking pop star also took to her Instagram account to share her excitement: © 2014 Latin Post. 47 Things I Learned From Miley Cyrus' 'Dirty Hippie' Art. By John Walker 9/11/2014 Those sculptures that Miley Cyrus exhibited during New York Fashion Week — what do they mean? 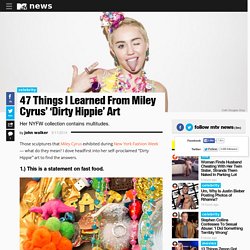 I dove headfirst into her self-proclaimed “Dirty Hippie” art to find the answers. 1.) This is a statement on fast food. Noughties Style: The Way We Wore. MISS MOODY BLUE: OBSESSIONS, VOL. 3: NY FASHION WEEK. Hello, lovelies! 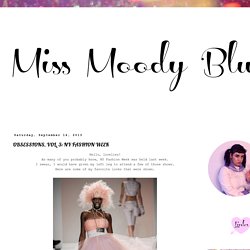 As many of you probably know, NY Fashion Week was held last week. I swear, I would have given my left leg to attend a few of those shows. Jeremy Scott Spring 2014 colorful dress - Because I Am Fabulous. No. 13. Alexander McQueen (British, 1969–2010)DressNo. 13, spring/summer 1999 White cotton muslin spray-painted black and yellow with underskirt of white synthetic tulle Courtesy of Alexander McQueen Photograph © Sølve Sundsbø / Art + Commerce Andrew Bolton: In one of the most memorable moments at McQueen’s runway shows, two robots spray-painted a dress worn by the model Shalom Harlow. 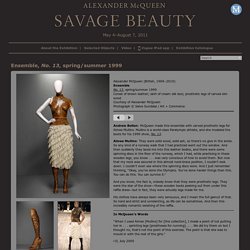 Here we talk to Shalom about the experience. Shalom Harlow: I walked right up to it and stood on top of this circular platform. And as soon as I gained my footing, the circular platform started a slow, steady rotation. Ableism in the Fashion Industry. The discussion about diversity in fashion isn’t a new one. 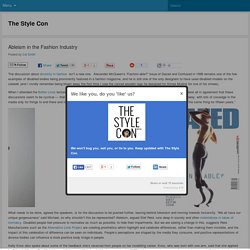 Alexander McQueen’s “Fashion-able?” Issue of Dazed and Confused in 1998 remains one of the few examples of disabled bodies being prominently featured in a fashion magazine, and he is still one of the only designers to have used disabled models on the catwalk (and I vividly remember being blown away the first time I saw the carved wooden legs he designed for Aimee Mullins for one of his shows). When I attended the Better Lives lecture on ableism in fashion at the London College of Fashion last Tuesday, the speakers were all in agreement that these discussions seem to be cyclical — that every now and again we will see disabled models used in fashion shoots or on the runway, with lots of coverage in the media only for things to end there and repeat a few years later.

As Michael Shamash put it, “I feel like I’ve been writing about the same thing for fifteen years.” Fredbutlerstyle: 2010-09-12. I don't know about you, but one of my favourite parts about a museum visit is ending up in the gift shop! 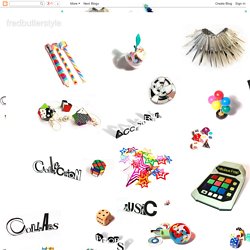 The Science Museum's collection of gizmos, gadgets and 3D specs is worth a visit without seeing the rest of the galleries! Meanwhile, over the road, the V&A gift shop is like a luxury accessories boutique, with the best books any birthday money can buy! So when the team approached me to design something for the 3rd edition of the ‘Cherry on the Cake’ designer collection, I was over the moon! Kate Moss in 3D. FASHION WEEK RECAP - THE SHOWS - L'Etoile SportL'Etoile Sport. Monique Lhuillier during the Mercedes-Benz Spring Fashion Week in New York on Sept. 5, 2014. 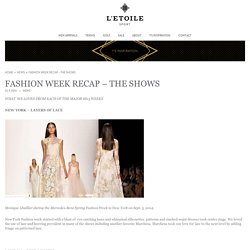 New York Fashion week started with a blast of eye-catching laces and whimsical silhouettes patterns and cinched-waist dresses took center stage. We loved the use of lace and layering prevalent in many of the shows including another favorite Marchesa. Marchesa took our love for lace to the next level by adding fringe on patterned lace. Topshop Unique Spring/Summer 2015 Collection – London Fashion Week Wearable faded glamor seems to be the inspiration behind the collection presented at London Fashion Week. New york fashion week. PARIS FASHION WEEK OFF AND RUNNING!

The last leg of the fashion week marathon that has run from New York to London and Milan is on it’s way in Paris. Paris will feature all the latest offerings from some of the industry’s biggest names including Balmain, Miu Miu, Christian Dior, Hermes and Chanel in the Carrousel du Louvre. New arrivals and up-and-coming talent, including Italian designer Anthony Vaccarello, young french designer Jacquemus and Japanese fashion house Anrealage, are also set to showcase their pieces.

Here’s the breakdown of the runners I mean designers. Locked In A Bow: London Fashion Week. London Fashion Week | Autumn Winter 14 So something a little different today a few months back I was given a press pass to go into London Fashion week for the day and with next one coming round the corner I thought I would show you around a little incase you want to go down to the Spring/Summer 2015 collection later this month.

Today will be focusing on what goes on outside the catwalks, you really can spend a whole day there looking round and shopping, before you even get into runway show. There will be a lot of pictures in this post to give you a full overview and I will also show you the first bits that I bought whilst I was there aswell. Enjoy! The event was held in the beautiful grounds and building of Somerset House in London, it is such a grand venue and they were the perfect hosts. 3._Spray_painted_dress_No._13_SS_1999_model_-_Shalom_Harlow._Image_-_Catwalking..jpg (JPEG Image, 1600 × 1032 pixels) - Scaled (64%)

Neon - The 80 Greatest '80s Fashion Trends. 10 Fashion Week Facts. With the Big Four Fashion Weeks finally concluding, serious fashion withdrawal symptoms have begun to kick in for most of us. To battle the nostalgia, we hope these fun Fashion Week facts keep you going. Fashionistas, we hope you are taking notes. Dolce and Gabbana Fall 2013 Fact #1Contrary to popular belief, it was New York and not Paris that witnessed the first Fashion Week in 1943. During World War II, fashion publicist Eleanor Lambert decided to shift the world’s attention from Paris as the fashion capital to New York by inviting journalists to view the collection of American designers.

Fact #2Fashion Week always takes place in the same order every year starting with New York, London, Milan, and the finale in Paris. Fact # 3Fashion Weeks have two shows each year timed well ahead of the actual season. Fact #4Now that many designers have turned to live online streaming of their shows, did you know you can actually tell which fashion week you are watching just by the catwalk style? ​10 things you didn’t know about Jeremy Scott. "Taking trash and making treasure," Jeremy Scott says in his new namesake book, and he is the king of it.

Turning food wrappers into boob tubes, newspapers into ball gowns and Barbie into real people, Jeremy knows something good when he sees it, whether or not anyone else does. Everything he does is outrageous and contagious and we can't get enough of it. He's an i-D favourite and we know almost everything about him, but here's a few things we didn't know... 1. Why dyed armpit hair will be 2015's most subversive trend. Once again, the debate surrounding axillary hair continues apace. Of course the very act of not shaving has become a subversive one but, regardless of whether you associate body hair with feminism or are revolted by the sight of it, it’s transcended its role as the most powerful weapon in the fight against the patriarchal view on female beauty to become an alternative beauty trend. Here are some things to take on board in 2015: If you grow it, dye it. The Secret (And Not So Secret) History Of Choker Necklaces. Create a Pie Chart, Free . Customize, download and easily share. Just enter the amounts, pick some colors/fonts, and we'll take it from there!

The scheme has been sponsored by Topshop since 2001 who have been integral in nurturing emerging talent in London. NEWGEN offers catwalk designers financial support towards their show costs and the opportunity to use the BFC Catwalk Show Space. Others receive sponsored presentation & installation funding and a timeslot in the ‘NEWGEN pop-up Showroom’ to showcase their collections. This offers an important introduction for young UK-based designers to influential press and buyers from around the world. Moschino 30 years on: Italy's most light-hearted label enters a new era - Features - Fashion.

Before his death, Rossella Jardini was Franco Moschino's right-hand-woman; in his absence, she was appointed the brand's creative director, taking control of a brand that had become known for accessorising its clothing with wry social commentary. MAN announces new line-up for LCM AW15. Are Buffalo shoes making a comeback? Nineties 'flatform' sneakers beloved of the Spice Girls make a return. By Sadie Whitelocks Published: 22:10 GMT, 25 March 2013 | Updated: 22:10 GMT, 25 March 2013 The funky platform footwear brand Buffalo, made famous by the Spice Girls, has launched a collection inspired by its best sellers of the Nineties. The European firm has collaborated with U.S. e-commerce site Solestruck, on a limited-edition line of stacked sneakers for men and women, called So Happy Together.