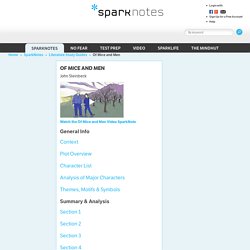 This is when the story is told from the point of view of a third-person limited narrator, who knows only the thoughts and feelings of a single character, while other characters are presented only externally. 5 Comments 84 out of 173 people found this helpful Of mice and men by macbride14, November 28, 2012 Of mice and men is a fantastic book and film, it really shows how hard it was to live back then. 3 Comments 65 out of 150 people found this helpful A good read, but sad by Alfred_F_Jones, February 02, 2013 We read the novel for my 9th grade English class, and I'm supposed to be writing and essay about it right now, but oh well. The shot book got me attached to the characters, and I almost cried at the end, but I was in class. Overall I'd give it an 9 out of 10. Of Mice and Men: Themes, Motifs & Symbols. Themes Themes are the fundamental and often universal ideas explored in a literary work. 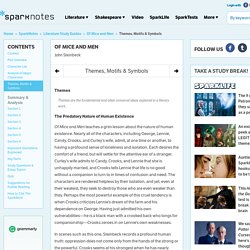 The Predatory Nature of Human Existence Of Mice and Men teaches a grim lesson about the nature of human existence. Nearly all of the characters, including George, Lennie, Candy, Crooks, and Curley’s wife, admit, at one time or another, to having a profound sense of loneliness and isolation. Each desires the comfort of a friend, but will settle for the attentive ear of a stranger. In scenes such as this one, Steinbeck records a profound human truth: oppression does not come only from the hands of the strong or the powerful. Fraternity and the Idealized Male Friendship One of the reasons that the tragic end of George and Lennie’s friendship has such a profound impact is that one senses that the friends have, by the end of the novella, lost a dream larger than themselves.

Ultimately, however, the world is too harsh and predatory a place to sustain such relationships. Motifs The Corrupting Power of Women. Of Mice and Men: Plot Overview. Two migrant workers, George and Lennie, have been let off a bus miles away from the California farm where they are due to start work. 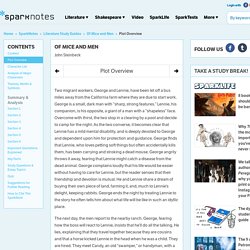 George is a small, dark man with “sharp, strong features.” Lennie, his companion, is his opposite, a giant of a man with a “shapeless” face. Overcome with thirst, the two stop in a clearing by a pool and decide to camp for the night. As the two converse, it becomes clear that Lennie has a mild mental disability, and is deeply devoted to George and dependent upon him for protection and guidance. George finds that Lennie, who loves petting soft things but often accidentally kills them, has been carrying and stroking a dead mouse. The next day, the men report to the nearby ranch. The next day, George confides in Slim that he and Lennie are not cousins, but have been friends since childhood. Slim goes to the barn to do some work, and Curley, who is maniacally searching for his wife, heads to the barn to accost Slim. GCSE Of Mice and Men - Character/Context Revision Notes *UPDATED* Hello! 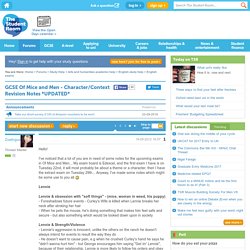 I've noticed that a lot of you are in need of some notes for the upcoming exams in Of Mice and Men... My exam board is Edexcel, and the first exam I have is on Tuesday 22nd, it will most probably be about a theme or a character, then I have the extract exam on Tuesday 29th...