Gwyneth Paltrow launches debut fashion line. London - Actress Gwyneth Paltrow has launched her own fashion label inspired by pieces she has “worn, loved, and never been able to replace”, which is on sale via her Goop fashion and lifestyle website. 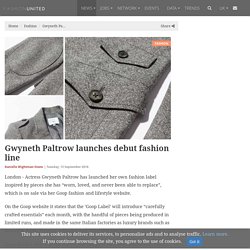 On the Goop website it states that the 'Goop Label' will introduce “carefully crafted essentials” each month, with the handful of pieces being produced in limited runs, and made in the same Italian factories as luxury brands such as Azzedine Alaia, Proenza Schouler, and Dries Van Noten. Goop doesn’t state that the actress has designed the collection herself, rather she has inspired the pieces adding that the fashion and lifestyle website has collaborated with some of its “most talented friends”. Rihanna Teases Every Piece From Her FENTY PUMA FW16. Rihanna and PUMA spent the summer dropping shoes right and left, including furry pool slides, low-cut creepers and a mesh-laden trainer. 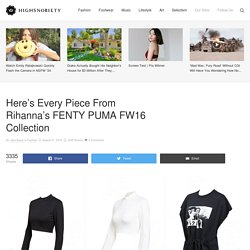 But as exciting as this bevy of footwear is, it pales in comparison to the duo’s upcoming FENTY FW16 collection. We can now give you the grand reveal of every single piece from the upcoming line. And what a line it is. In stark contrast to their colorful footwear offerings, the FENTY line is almost exclusively comprised of black and white, broken only by the occasional splash of grey. The line’s athletic-wear offerings are the stuff of sporty dreams, ranging from sweatpants to track jackets to jumpsuits.

Look out for the Rihanna x PUMA FENTY FW16 collection to hit stores next Wednesday, September 7. The 25 most powerful people in fashion. Here’s Why This Model Took Off Her Heels at Yeezy Season 4. Share Video Too hot for haute couture! 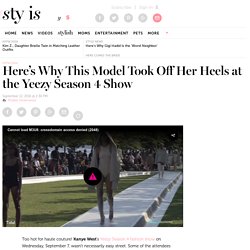 Kanye West’s Yeezy Season 4 fashion show on Wednesday, September 7, wasn’t necessarily easy street. Some of the attendees complained about the conditions (it was in the high eighties!) And the late start time. After standing at attention for hours, a few of the models passed out on the lawn of Roosevelt Island and stumbled in their shoes while storming down the runway. But Amina Blue refused to be a potential meme. “They were comfortable, it was the heat from the sun,” she explained to The Cut, citing the reason why some of Yeezy’s girls lost control. 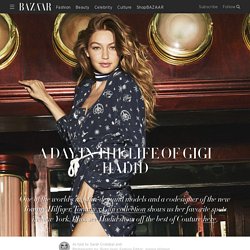 On the morning of our shoot, there are three paparazzi waiting outside her New York home. Her security team manages to lose them while winding their way through SoHo, but it doesn't take long before they track down our setup outside the Mercer hotel. Not only have they found us, but they've also multiplied. At one point I count 20 jockeying for position in their own Gigi-fied trance. Earthen Warrior sleep mask; Eres briefs. Indian teen who was left disfigured by acid attack to appear at New York Fashion Week. A teenage acid attack survivor who has never left India is to model at New York Fashion Week - two years after the life-changing assault. 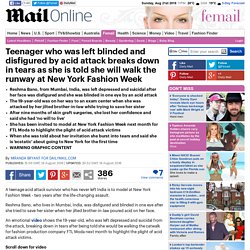 Reshma Bano, who lives in Mumbai, India, was disfigured and blinded in one eye after she tried to save her sister when her jilted brother-in-law poured acid on her face. An emotional video shows the 19-year-old, who was left depressed and suicidal from the attack, breaking down in tears after being told she would be walking the catwalk for fashion production company FTL Moda next month to highlight the plight of acid attack victims. Scroll down for video Elated: Reshma Bano, 19, from Mumbai, India, pictured left before she was attacked with acid and right after, was overjoyed after being invited to model at New York Fashion Week.

Plus-size model Ashley Graham fronts H&M Studio's latest campaign. She is one of the world's most well known plus-size models thanks to a successful career appearing in magazines such as Vogue, Harper's Bazaar, Glamour and Elle, but Ashley Graham has just added another string to her already-impressive bow. 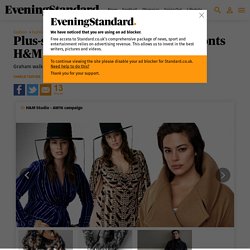 Fronting the autumn/winter campaign for high street stalwart H&M, Graham - who became the first plus-size model to apear on the cover of the Sports Illustrated Swimsuit Issue this year - continues to break down barriers in the fashion industry. Speaking to Harper's Bazaar about the campaign, she said: "It's exciting to be representing one of the most internationally known fashion retailers that is not only offering more options for curvy women, but pieces that have a high fashion aesthetic. " Model With Vitiligo, Winnie Harlow, Stars In Desigual And Diesel Fashion Campaigns. Winnie Harlow is continuing to shake up the fashion industry by proving that there is no such thing as “one-size-fits-all” when it comes to beauty. 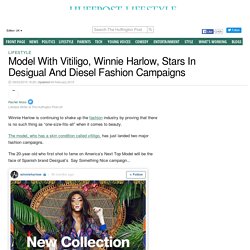 The 20-year-old who first shot to fame on America’s Next Top Model will be the face of Spanish brand Desigual’s Say Something Nice campaign... And will star in Diesel’s upcoming Spring/Summer campaign... “We believe in showing different types of body and beauty - celebrating uncommon beauties, this is what Diesel is and always has been about,” Diesel artistic director Nicola Formichetti told E!

News of the campaign. “With this new campaign for SS15, we want to convey a message of inclusiveness and positivity - and all of our models are smiling which is unfortunately rare in this industry.” Harlow, who’s real name is Chantelle Brown-Young, has previously said she was bullied as a child and called ‘zebra’ and ‘cow’ by her peers because of her vitiligo - which causes de-pigmentation of the skin in patches. Miss Harlow, we salute you.